Dead serious. Best ever. And it wasn’t just because Alex Vega spoke at a breakout session. It wasn’t just because I cried seeing Edie Windsor a row in front of me. It was everything. Everything. Leanne Pittsford, the founder of Lesbians Who Tech, has gotten so incredibly good at this that I don’t even know how it could get better next year. But I know it will. Because Leanne is a badass witch who gets shit done. 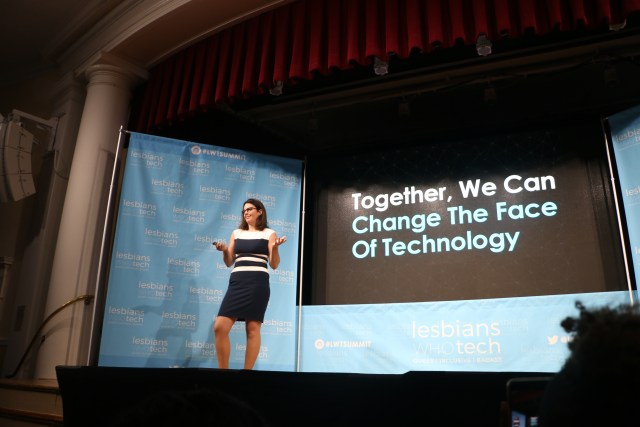 It looks like she’s saying “nbd” here, doesn’t it? We can change everything, NBD.

Here were my favorite things, in order of their occurrence, about this year’s Lesbians Who Tech Summit in New York City.

The Morning Sessions…Just…All Of Them

Listen, after the standard welcome, we kicked off the day with an actual human person who climbed Mount Everest telling us what she learned about the tech industry while doing it. Which, like, Holy Shit. I know in my head that people do this sometimes. But I don’t think I’ve ever seen with my own eyes anyone who’s actually done it. And then Vivienne Ming came on stage and broke my brain. Her speech was on how to robot proof your kids — which is the funny title. Basically, she talked about what we’re going to need in the future when AI can do a lot of what we do now.

By 2024, we will have only one job description: Creative adaptive problem solvers. That’s all we’re gonna need. And she ended her talk with our collective responsibility to make sure that every child learning today as the opportunity to become such a person. Then we moved on to Erica Anderson, who works at Google News Lab. She spoke about the future of journalism, so naturally I took a ton of notes. She brought up a veritable boat-load of resources I had no idea existed. Like am I the only one who had no idea that First Draft News was out there helping journalists fact check eyewitness images on social media? Or that, beginning in 2017, Journalism360 is going to be giving grants to journalists who want to tell stories using VR? MIND BLOWN.

Then we got to hear from Jenna Lowenstein—did you know this fabulous queer woman is one of the team of people behind Hillary Clinton’s internet presence? This is one of the people who came up with:

And this wasn’t the only time we got political. I’ll talk about that more in a hot sec.

And then Lanaya Irvin of Bank of America, talking about how, when you get some power and influence under your belt, you need to spend it on inclusion. You can spend that trust, leverage that credibility, to drive change. It was lean in, except realistic. It was like a “yes, and…” to the concept.

When the day started like this, I couldn’t believe it. I knew it was going to be a series of knock-it-out-of-the-park speakers all day. And almost without exception, that’s exactly what happened.

All The Times Technology Got Critiqued

A lot of times, any conference for any profession can get a bit…masturbatory. It’s a lot of talk about how great we are, or on utilizing arcane insider knowledge. But what I like about this is how real the speakers get about how imperfect we all are, and how imperfect the technology sector continues to be, even as we make great progress and do great things. My favorite example of this was Pri Oberoi, who talked about how machine learning can totally fail when we assume the future is going to be like the past. And she talked about an instance where predictive technology has some dire real-world consequences: in the case of recidivism modeling, or the attempt to predict how likely a criminal is to re-offend. She reminded us that we create self-fulfilling feedback loops—that all of our prejudices are present in the data we’re using to teach our machines. It’s never pure logic when we leave it up to the computers, because we made the computers. We made the data.

And it was a good talk with well-designed slides. We miss Alex Vega. 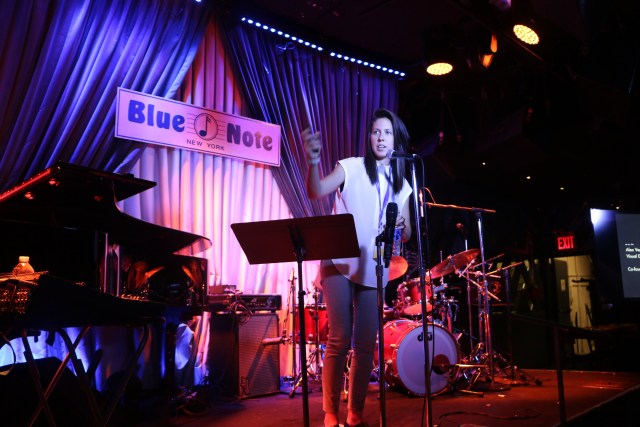 Alex talked about the very thing that’s taken her away from us—being a designer and finding her path from entrepreneur to employee. She did speak about how much she misses us (the feeling is mutual!) but how she’s found her passion. She highlighted specific entrepreneurial skills that make for an attractive employee, and she encouraged people to sit down and think about what they want from their jobs. She killed it, ugh, so good.

When Jamie Chung Gave Up Their Time…

I didn’t get a single photo of beloved Straddler Jamie Chung’s Keynote Ignite speech because I was riveted. It was supposed to be a slightly tongue-in-cheek presentation about their transition (using CSS transitions). I know this because they let the slides play behind them as they instead gave up their time to talk about the issues of police brutality facing the Black community in America. They read statements and questions and concerns given to them by their friends—how can the technology community, an industry that prides itself on disruption, disrupt this? No answers were given. But a standing ovation was.

This is a good time for me to point out that women of color were centered at Lesbians Who Tech—in the same block as Megan Smith represented the White House, we also had the distinct pleasure of hearing Janisha Gabriel on designing the Black Lives Matter website. She walked us through the development of the website, from its first iteration to its current iteration. She also gave us a history (or shall I say herstory) of the hashtag and its founders. I was so impressed with how adaptive Gabriel was—when one is designing for an entirely new movement using entirely new platforms, one has to be almost liquid.

Leanne mentioned that half the speakers are women of color. She makes sure of it as she plans speakers, and that she makes sure of it purely by numbers. She also said that if she didn’t, it might get out of balance really quickly because white people ask to speak more. I’ve never heard a conference organizer just say it — but it’s true. And that’s why we need a policy like Leanne has put in place. It places the onus on the organizers to do the leg work. And telling us all that white people ask to speak more might make us all consider how we can create an environment where EVERYONE feels comfortable volunteering their talents. I know I’ve been thinking about it.

Ugh, wanna see me ugly cry? Remember all those times I told you about raising money for the Edie Windsor Coding Scholarship, a fund to send queer women and nonbinary folks to coding boot camp? Well they made it, and Edie Windsor was there and y’all. Y’all. I did not expect the emotions I’d feel at seeing Edie Windsor. I’ve seen her before. I cried. She made a binder of all the amazing things the coders did. 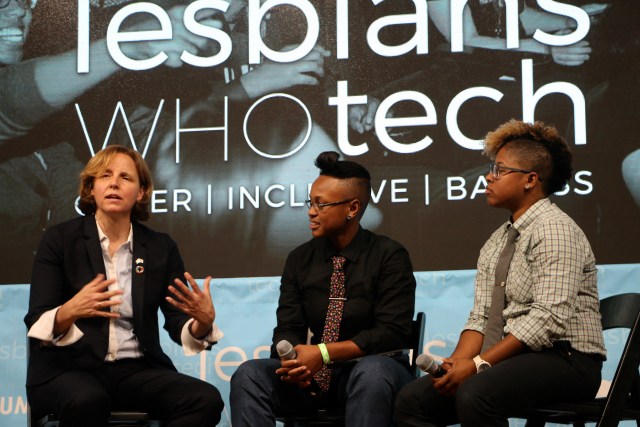 You might be asking yourself why Lesbians Who Tech named a coding scholarship after Edie Windsor, the defended in the case that got us the right to marry in the US? Well that’s because she was a techie, specifically an engineer for IBM, and the first PERSON at IBM in New York to be presented with a personal computer.

We loved on Hillary Clinton so much. We loved on voting so much. Debra Cleaver, founder of Vote.org, told us how she personally plans to make voting easier. I fucking love voting. If you are a US citizen, vote. Vote vote vote. And if you have the resources:

Debra from https://t.co/T62guCv7oH needs money to register voters DO THE THING GAYS DO IT. #LWTSUMMIT

This might surprise some of you, given that I do not partake in any substances other than alcohol, but I actually think the most important presentation of the day came from Isamarie Pérez, who talked about how women, people of color and queers stand to dominate the quickly-growing cannabis industry. She came representing Meadow Care, a medical marijuana delivery service, and she talked about how the cannabis industry needs EVERYTHING right now, from lawyers to websites willing to advertise to (yes, of course) techies. This is a 20 BILLION dollar industry not all made up of cis straight white dudes already, and folks like us stand to get in on the ground floor. It was certainly a call to action—don’t let this be another industry filled with white dudes in suits, says Isamarie.

So what about you? Were you at Lesbians Who Tech? I saw some of you, your hair looked great. What were your stand-out moments?