There was once a doctor who told my ex-girlfriend that she didn’t have to go to a gynecologist because she was gay. In the car, she turned to me and said “imagine if my mom weren’t a nurse and I didn’t know that I should?” Truth be told, a lot of us don’t know that we should. And a lot of us don’t, for a ton of reasons. Science says we don’t.

A new study by the University of Maryland School of Medicine shows that about four out of ten lesbians are not regularly screened for cervical cancer. This percentage of lesbians not being screened as recommended is higher than it is for women overall. We as a queer community are no stranger to being marginalized in the health care system (or any system, for that matter.) So this may not surprise us. The study states that cervical cancer is highly treatable when detected early, and that women who are engaging in same-sex sexual activity can also get HPV (this is already known because science, but you’d be surprised how many people don’t actually think about it!) The study’s author, Dr. J. Kathleen Tracy, says the study highlights an often over-looked cancer disparity, the details of which will be presented at the 11th Annual AACR International Conference on Frontiers in Cancer Prevention Research. 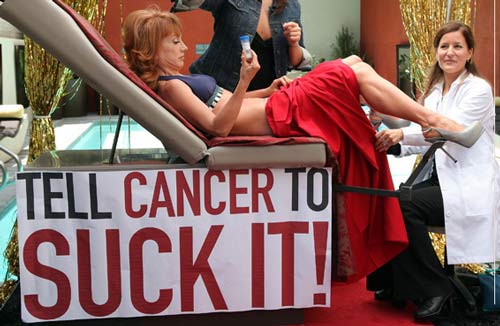 Here’s Kathy Griffin getting a pap smear by a pool. See? It’s not so bad to get one inside a private doctor’s office. via hotelchatter.com

Dr. Tracy and her team executed a standardized internet survey, sent to 3,000 women who self-identified as lesbians and 1,006 responded to the survey. Of these, 38% said they were not being screened for cervical cancer, while 62% said they were routinely screened.

The study states that the two most common barriers to testing for the 38 percent of lesbians who are not regularly screened were no physician recommendation (17.5 percent reported this) and not having a physician (17.3 percent.) In Dr. Tracy’s statements, she says that the overarching theme is a lack of communication between healthcare providers and their patients:

“We shouldn’t underestimate the importance of open communication between patient and provider,” Dr. Tracy says. “Our research showed that women who were open with their primary care doctors and gynecologists about their sexual orientation were nearly 2½ to three times more likely to have routine screening than those who did not disclose it. They also were more likely to be screened if their doctors recommended it and they believed that having routine Pap tests was beneficial.”

Basically the result of the study: it’s time for some real talk about Pap smears. And as much as I love talking with you about vaginas on the internet, this real talk should be with your doctor. If you don’t have a doctor like many lesbians in the study, you should get one. I live in a very happy, very privileged bubble where I have health insurance. But there are places where one can seek vagina treatment and consultation sans health care plan. While most of its media attention revolves around reproduction (preventing it or facilitating it), Planned Parenthood screens for all manner of STIs. There are also many other clinics that provide free or inexpensive screenings, and their reservation system is just a Google away. 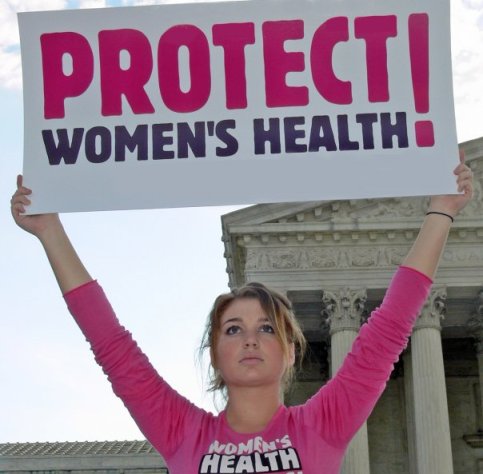 If you’re putting off seeing a doctor, you may want to examine why. We’ve all had terrible doctor experiences, yes, and having a bad experience can put you off. But I’ll tell you what my father told me my senior year of high school the day after I wrecked my car. He opened his driver’s side door and said, “If you don’t drive today you never will again. So drive.” Don’t let one or even a hundred bad experiences stop you from being your own health care advocate. Are you scared about the costs in money and time? We’ve already talked about Planned Parenthood, which provides complimentary health care, but also consider this: preventative care costs far less in time and money than care will/does when an illness becomes an acute problem. Getting a pap smear can save you time and money in the long run.

Perhaps you see a doctor, but they may not have told you to get a pap smear. If you’re one of the women who hasn’t been told by a doctor to go get a Pap, we have to examine why. Do you turn red-faced and embarrassed every time your doctor mentions sex and say you are sexually inactive because you aren’t sleeping with men? Let’s all help society ovary-up about talking sex. Be open with your healthcare provider. Communication is a two-way street. It’s a normal thing to talk about, especially with your healthcare provider. And sex between two people with vaginas has risks associated with it, risks you should get tested for. Are you like my ex-girlfriend, whose doctor told her she didn’t need to because she’s gay? Demand better doctors, demand better training. This is hard, because doctors have authority and sometimes it’s scary to stand up for ourselves around authority figures. You know what my ex ultimately did about this doctor? Nothing. We don’t all have to be crusaders all the time But she didn’t go see her again. Instead she found another doctor, one who spoke about her body in gender neutral terms, one who took her seriously and didn’t tell her her asthma was in her head. And most importantly, one who understood that if you have a cervix, regardless of sexual orientation or gender presentation, you need a pap smear. 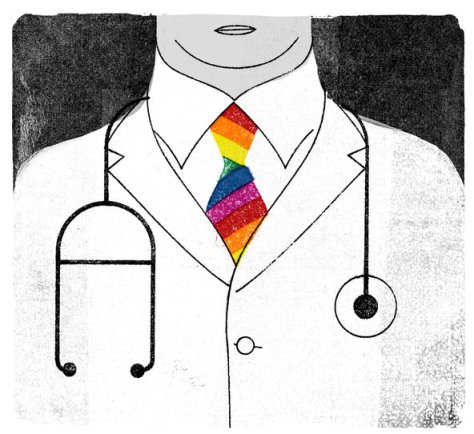 Studies like Dr. Tracy’s are important because it’s impossible to take responsibility for our healthcare if we are uneducated. How can we demand the healthcare we require when we don’t know what it is that we require? There are so many barriers to being educated and properly treated by doctors, some we have control over and some we don’t. Like when us women who are not straight report no sexual activity because we are assumed straight, because we were taught that sex is between a man and a woman, because we face ridicule or judgement from our doctors if we come out. When we are scared because we are uncomfortable in our bodies, because we don’t like to think about our vaginas if they don’t fit our outside gender presentation. Or perhaps this doesn’t apply to us because this study is about lesbians and we don’t identify as lesbians, we don’t even identify as female. When society tells us that if we have STIs, we are whores. Or we suspect something is wrong, but hope that if we ignore it, it will go away. There are just so many reasons that we have not to get tested for the HPV that can cause cervical cancer. But as the results of studies like these are discussed within our queer spaces, as queer communities we can support each other in the face of an imperfect health care system. This study and others like it can provide a platform, a jumping off point for our community discussing how we’re going to solve our own problems with vaginas, cervixes and their health. Because even with all these reasons not to get a pap smear, none of them outweigh the reason you should book your appointment for a pap smear right now.

It could save your life.

Here are some resources Autostraddle has published in the past regarding sexual health, pap smears and going to a gyno while queer. We thought you’d find them helpful.

Lesbian Safe Sex 101: The Doctor is In (Also, the Cartoonist)

The PP & Me: Why We All Need Planned Parenthood

Why Are Gay Ladies So Afraid of the Gynecologist?