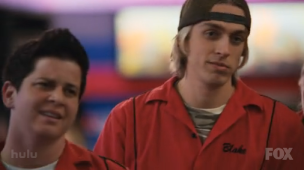 Last night was the season finale of a popular television program called BONES. My Mom says it’s about a forensic anthropologist who works at the Smithsonian and also works with the FBI to solve mysteries that involve bones. Also “the woman who’s pregnant is bisexual and had a lesbian love affair with someone in college” and “there’s a whole murder-mystery book series.” More importantly, somewhere around the 35 minute mark the role of “mannish lesbian” is played by none other than Autostraddle’s very own JULIE GOLDMAN.