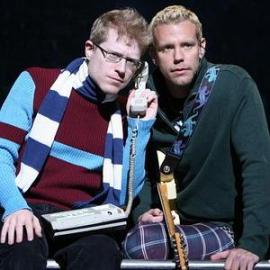 The Broadway show closed in 2008 but when one of the original producers caught the Neil Patrick Harris-directed and celeb-studded 1-off Los Angeles performance last summer, it lit a fire under his ass to make some magic again. The LA cast included Vanessa Hudgens, Wayne Brady and Tracie Thoms.

SO WE ARE VERY EXCITED THAT THEY ARE reviving RENT Off Broadway in 2011! Word on the street is there will be an entirely new cast filling the very big shoes of Mark (Anthony Rapp), Roger (Adam Pascal), Maureen (Idina Menzel), Collins (Jesse L. Martin) etc., and the freshly-produced version will open in June 2011, after the Tony awards.

For the uninitiated, RENT was groundbreaking when it opened in 1994 for representing a group of friends, gay & straight, falling in and out of love despite race (and HIV status). It changed my life when I saw it. Riese has feelings about it too–

Riese’s Special Comment: It’s crazy to think that something that premiered in the mid-90s — when we grew up — is now almost a “period piece.” I was obsessed with the soundtrack in early high school, saw the touring company in Detroit in 1998 and saw it on Broadway in New York in 2001 and again in 2006. I saw the movie the weekend it came out (live show = so much better), and often wile away the twilight hours watching RENT videos on YouTube. Seriously.

I remember providing a sassy/smug teachable moment last year to a teenager who was confused why “AIDS was such a big deal” in the musical. She complained that RENT just seemed like “a bunch of spoiled kids whining about art and taking themselves too seriously.” The latter I could only explain with “it was a different time,” and the former made me want to bash my head into the undoubtedly primordial history textbook she’d read in Social Studies. CHILD, an ENTIRE GENERATION of gay men in New York City was almost COMPLETELY WIPED OUT by AIDS and it changed our entire world/culture dramatically in a very short period of time, particularly w/r/t sex culture and gay activism. In 1995, a year before RENT debuted, the CDC announced that AIDS was the leading cause of death among all Americans aged 25 to 44.

RENT’s narrative core is the romantic/heartbreaking tragedy of “living with living with not dying from disease.” But it’s also about a generational discontent that some apparently view as “a bunch of spoiled kids whining about art.” As a 15-year-old attending a boarding school for the arts during the mid-90s, I didn’t see spoiled kids whining about art. I saw my future: a self-selected post-racial queer utopia comprised of hilarious gay boys, damaged drug addicts, political performance artists and striving, dreamy, self-obsessed emo boys with Kurt Cobain theatrics and Angela Chase brains. In RENT, the lesbian couple (Joanne & Maureen) was so undeniably sexy in a way I’d never seen gay women portrayed before.

Prevention, awareness and medical advancements have fortunately made life with HIV radically different than it was in the 90’s. That’s obvious. The other major shift is an economic one: RENT takes place during an economic boom-time and now there’s a recession in which kids are supposed to make “sensible choices” and stop romanticizing the “need to express, to communicate” over things like electricity and shelter. What’s wrong with Scarsdale, really, if Dear Old Mom and Dad have a futon in the basement and food in the refrigerator? It seems positively rich that Mark can choose if he wants to “sell out” or not — these days, selling out is an artist’s only hope of making a living. 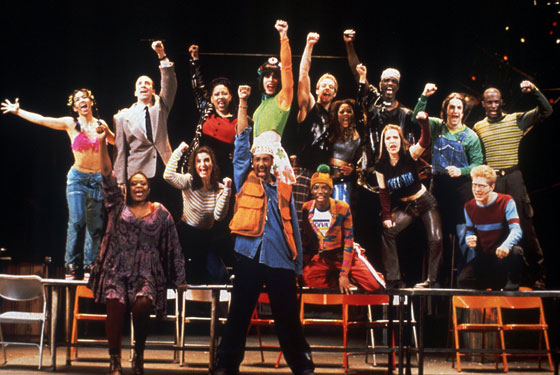 Now, having left New York City for San Francisco after six years there, Santa Fe resonates in a way I wouldn’t have expected when I was 15.

It’s a comfort to know, when you’re singing the hit-the-road blues
That anyplace you could possibly go after New York would be a pleasure cruise…

But RENT remains relevant despite societal changes — the mid-90’s WERE a time when we could afford to damn the man in pursuit of truth/art and we desperately need a new generation of strivers who believe doggedly that truth/art is actually more important than a 401K, though no reasonable adult would ever tell them that.

Also, the music is pretty f*cking awesome. There’s not a dud on the entire album.

The best part of RENT, however, is its intense, compassionate, hopeful tenderness. And fifteen years later, it still resonates: it’s a show about growing up and moving away and taking risks and making a new family out of your friends and loving them above all else. And what kid — especially a queer kid — can’t relate to that.

Ryan Murphy is starting to dish on what’s up with Kurt & Blaine (Darren Criss). He still isn’t sure whether Blaine will become Kurt’s boyfriend or just act as his mentor, and reveals that the anti-bullying storyline will span the entire season and will affect additional characters.  (@afterelton) Chris Colfer also referred to Kurt’s social relevancy when chatting with Entertainment Weekly:

“With all due respect to my castmates, they don’t get the letters like I get – the letters that not only say ‘I’m your biggest fan,’ but also, ‘Kurt saved my life.’ and ‘Kurt doesn’t make me feel alone’ from 7 year olds in Nebraska. When I was growing up, there wasn’t a character like this. I think what makes Kurt so special is he’s finding himself in front of our eyes.”

In other news, check out video of the scandalous, ought-to-be-illegal GQ photoshoot starring Lea Michele, Dianna Agron and whatshisface.

Lisa Cholodenko, her partner and their son are featured in W Magazine’s Family Values issue. Her experience starting a family inspired The Kids Are All Right, which is getting serious Oscar buzz this time of year. (@wmagazine) 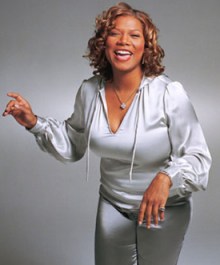 Still no #ItGetsBetter video, but she did give her two cents regarding the role the parents play in the world of bullying:

“I think a lot of times kids who are bullies get away with it because no one confronts their parents. Parents have to step (up) to other parents and say, ‘Listen, your son or daughter is texting my son or daughter, or emailing, or tweeting, or Facebook-ing or talking about my child or pressuring them in some sort of way. They’ve gotta step in for these kids… We’ve gotta fight for our kids. It’s a shame… No child should have to lose their life through a senseless killing and that’s really just the saddest thing of all. No parent should have to be on TV explaining that.”

She also reveals she was picked on at school because she had big breasts:

“Later, I found that having big breasts was a really good thing, and people were paying for this.”