It isn’t the first time. As the fights for Ferguson and Eric Garner and Tamir Rice rage on, I have stood on the sidelines waving my best solidarity fist. But I keep wondering where all the women and girls are in this conversation. I see them leading the marches and the fight. I’ve read their stories and their thinkpieces. I’ve watched as women of color – and especially black women – have connected the dots between what happened in Ferguson, what happened to Trayvon Martin, and the movement for reproductive justice. But this is about more than connecting the dots. Police brutality isn’t a women’s issue because of a complex game of six degrees of separation. This is a women’s issue because our sisters are being impacted directly, and because they’ve been harassed, beaten, raped, and killed by cops for centuries.

Another man/boy shot (not again). Unarmed (his black skin is weaponized). Killed by cops (since slavery). The terrible ever-expanding litany of names: Amadou, Sean, Oscar, Rodney, Trayvon, Michael… We’re on a first name basis (excruciatingly familiar). Collective mourning and grief ensue (my tear ducts are dried out; there’s only rage). Calls for justice in the black community (justice is prosecution and prison). #BlackLivesMatter on a social media loop (numbing). We are trying to convince ourselves that it’s true (we don’t fully believe it). Please make it true (it’s a symbolic prayer).

In the background, a faint sound (a whisper). Aiyanna, Tyisha, Renisha, Rekia (background noise). Woman/girls shot (do they shoot black girls & women?). Unarmed (her skin is a bullet magnet). Killed by cops (since slavery). They are not household names (excruciatingly unfamiliar). A few people mourn (silently). Some calls for justice (more prosecutions and prison). #BlackLivesMatter? (But which ones?)

You’re so selfish. This isn’t the right time, the voice intones. Is that voice in my head? I can’t tell. There never seems to be a ‘right’ time to remember the names of murdered black women (never). Sadness and grief threaten to overwhelm (so tired). Stubbornly I remember (an act of defiance).

Police brutality, the prison industrial complex, and the state are not just the enemies of black men and other men of color. 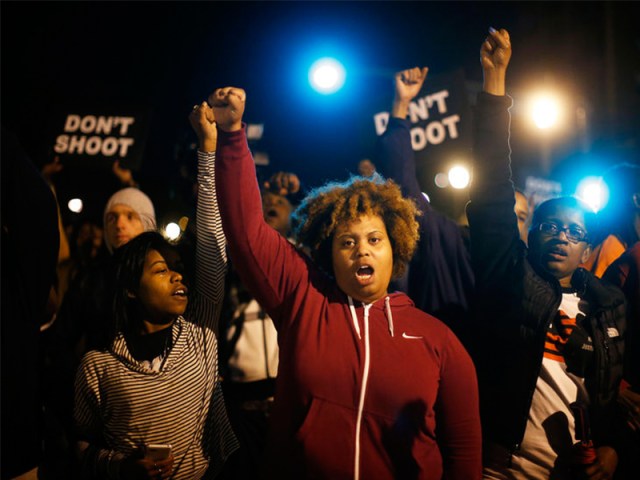 Photo by Jim Young/Reuters via MSNBC

Amid the incredibly disheartening barrage of news updates about white cops killing and hurting black people, there has been a notably lopsided division of attention and passion from both the media and the activists on the ground. Black men and boys are seen as symbols for an entire race of people who deal with police violence. And women and girls, gunned down, raped, and abused by cops, disappear in virtual silence.

Police violence against women and girls is prevelant. Women of color and queer people of color are not “allies” to men in this challenge; they are fully engaged and impacted partners. Their fate is also on the line. Their stories are also being shaped by a police state that actively works to destroy them. That’s why, as Gradient Lair summed up so perfectly here, the kind of erasure and silence that comes from ignoring the names and faces of the women and girls who have faced police violence is a form of violence in and of itself:

The erasure of the history, the experiences, the activism and the reality of Black women in relation to police brutality, extrajudicial execution and State violence is unacceptable. Erasing Black women is NOT “supporting” Black men. It is erasure of Black history, something Whites/non-Black people of colour gleefully engage in via epistemic violence, false equalization and using Black death solely as a trope to center non-Black lives. We can’t also engage in our own erasure. Love itself, as a concept and praxis, needs to be decolonized when it’s expected to be/expressed as the erasure of Black women in the service of Black men. Harm to any Black people is not “pro-Black.” Black women’s truths and lives matter. Black lives matter. And everyone, including fellow Black people, have to start actually believing this. And then start or continue acting against any oppression that seeks to confer anything different from the value of Black life.

Before the riots in Ferguson, women had been persistent in their movements to stop sexist policing which revictimized them. For decades, women have come forward to report rape, abuse, harassment, humiliation, and worse from police. For decades, there failed to be a response of this magnitude.

Women, too, were some of the original targets of police and state violence, and in many ways women of color are still one of their primary strongholds for incarceration, arrest, and abuse. Monica Jones was harassed and imprisoned for taking a ride with someone, guilty of nothing really, nothing except “walking while trans.” And black. And a woman. CeCe McDonald went to jail for defending herself. Women and girls have died or been beaten on camera at the hands of police or state agents and gone almost unmentioned. For queer and trans women, women of color, women in the sex and drug industries, and poor women, the police are not protectors, police violence comes as no surprise.

As Katherine Cross wrote after the Eric Garner decision on Facebook:

For trans women of color in this city, harassment by the police is an ever present risk. From officers who use public searches as an excuse to grope you and answer the puerile questions on every cis transphobe’s mind, to one’s who use your birth control as an excuse to run you in on prostitution charges, to those who will look the other way when civilians try to murder you, there is no safety, no good, that ever came from calling the NYPD. The red strobes of the squad car merely bathe my sisters in suspicion and callow judgement.

In my years working with and sitting on the board of the Sylvia Rivera Law Project, a legal aid society that represents and advocates for low income trans women of color in New York, I can safely say that so many of our clients come to us with stories that — if there were any justice — would be considered national scandals, would become hashtags made of tinder to light protest marches and die-ins. Sex workers, homeless people, immigrants documented and not, all have had various run ins with police whose first act of violence is misgendering and whose last they were lucky to walk away from with their life. My sisters are, at best, a rounding error in an officer’s quota, at worst a vent for their frustrations and petty prejudices…

That’s the NYPD I think of, the one I grew up with, that cut a path through my neighborhood, which makes enemies of my neighbors and my sisters; that’s why I can’t say I was terribly surprised by yesterday’s decision.

A 2007 United Nations report found that police violence against women and girls of color had increased, just as it had against men. But nobody was paying attention, despite a legacy of kidnapping and abuse for women and girls of color that goes back to reconstruction. A 2014 report by Black Women’s Blueprint and Women’s All Points Bulletin to the Committee Against Torture cited rape and sexual violence as the second most prevalent form of police violence, one most commonly afflicted on black women, and asked CAR “to acknowledge that police rape, and the rape of Black women, is torture.” The same report found that the overpolicing of women is actually getting worse in the United States. In 2000, black women were incarcerated at a rate six times of that of their white counterparts, and the female population in prisons across the country is skyrocketing. When these women go to jail, they face some of the same police brutality that was targeted at them before: rape, harassment, sexual assault, and physical abuse.

Perhaps worse than the widespread domination of men’s stories in this struggle is the underlying notion that some forms of police brutality don’t seem to be worth a march or a riot. Police have been reported or caught sexually assaulting women, killing women, and mocking survivors on camera. Police have responded to domestic violence calls with the intent to abuse, coerced and forced women in the sex industry or in other vulnerable legal positions to engage with them sexually. Police officers have humiliated trans and cis and queer women and women of color for seemingly eons, and yet even when we march in the name of fucking up their system we cannot remember those names.

I work at the Feminist Majority Foundation, and I was epically proud when one of the members of my team wrote a piece breaking down the many ways in which the fight for justice in Ferguson, and the fight to end police violence, was a feminist issue. The first comment on the piece criticized an edit I had made to adjust one of her sub-titles. “Women Are Victims of Police Brutality, Too,” I made it proclaim. I wanted people to know. I wanted it to be said, and as largely as possible. I was accused of being divisive, of trying to claim that the only issues that matter to us should be those that affect us personally. But I wasn’t. I was simply trying to refute the longstanding narrative that police violence is an issue only for black men. That is not derailing. That is expansion. That matters, and fighting for all black people of all genders to live lives free from police harassment and violence is not harmful. Justice is not a zero-sum game. It is possible to unite and fight for these things together, just as it should be possible to fight for all of the people it impacts together.