Project ROSE is a program in the city of Phoenix, AZ that claims to help sex workers. In the name of rescuing them, police officers handcuff alleged sex workers and take them off the street and into a church to meet with prosecutors and Project ROSE representatives, who offer them “diversion programs.” Sex workers who aren’t interested in the diversion programs face jail time. These sex workers aren’t technically arrested, just made “contact” with; conveniently, if they’re not arrested, then they don’t need to be offered the chance to speak to a lawyer. In May of 2013, Monica Jones became one of the people arrested by Project ROSE; the charge was “manifesting prostitution” for accepting a ride home to her neighborhood from men who turned out to be undercover cops. This week, Jones was found guilty, and faces the possibility of serving time in a men’s prison as a trans woman. 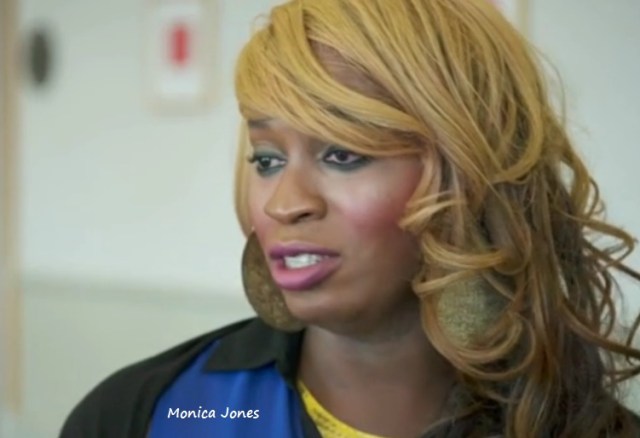 The ways in which Jones’ identity as a black trans woman and sex workers’ activist inform her arrest can’t be ignored. Much like CeCe McDonald’s arrest was impacted by racism and transmisogyny, Jones’ arrest is impossible to separate from her race, gender, trans status, and public activism around sex work. TransAdvocate points out that trans women are already disproportionate recipients of police scrutiny, and trans status can intersect with racial profiling to make police interactions particularly fraught and dangerous. What research there is on the interactions between trans women of color and police tells us that police intimidation is a constant reality, even without a legitimate basis for arrest. If anything about the situation can be interpreted to relate to sex work, the odds are that much worse.

“We receive reports and work with survivors all the time who tell us they were profiled–generally these are transgender women–by the NYPD as sex workers, stopped because of profiling, and searched,” Sharon Stapel, [Anti-Violence Project]’s executive director, tells the Voice. “If a condom is found on them, that condom is taken as evidence as intent to engage in prostitution. Many survivors of violence tell us that makes them hesitant to carry condoms.”

The fact that Jones is in fact a sex work activist in her own community makes the narrative around her arrest that much more complicated, and more suspect. Jones isn’t just an activist supporting the rights of sex workers, but is specifically an outspoken activist against Project ROSE, the same program under whose auspices she was arrested. In Jones’ case, it’s difficult to ignore the ways in which her arrest directly benefits the organization that arrested her. It’s notable that she was randomly questioned on the street three times after her arrest; during her trial, Jones made a point of questioning the constitutionality of the program (which the ACLU also questions). As she told VICE:

“Because I was very outspoken about the diversion program, being out there protesting and also being a student of ASU School of Social Work, I feel like the police knew about me,” Monica said.  “I was very loud, so they could pick me out of the crowd.”

Furthermore, the director of Project ROSE, Dr. Dominique Roe-Sepowitz, has interacted with Jones previously. Roe-Sepowitz is a professor at ASU, where Jones is a student; Roe-Sepowitz and Jones have even debated each other on the subject of Project ROSE. Jones’ longtime position as an active and engaged critic of Project ROSE calls the program’s stated aims into question: is it in fact a “rescue” operation? If so, who is it saving?

The program’s claim to help the alleged sex workers it (doesn’t technically) arrest seems flawed when one considers the options it offers them. (“Alleged,” because “manifesting prostitution” can, in practice, mean virtually anything, including striking up a conversation with a stranger.) If a sex worker takes the option to be “rescued” — to attend 36 hours of “diversion” programming — they’re offered no way to compensate for the critical income they may be losing during that time, and no childcare. No food is offered in the daily classes, which last from 8-4. No condoms are provided — ROSE is a religious program with Catholic values, attempting to address issues of sex work without contraceptives — and no concrete information or strategies are provided on engaging in sex work more safely, let alone how to leave sex work if that’s what’s desired. And for at least some of the sex workers, leaving the industry isn’t what they want — Jones included. She told VICE that “I wasn’t ashamed about being a sex worker. I kept bringing this up during the diversion program… Girls would ask me why I didn’t feel this way. Well, ’cause I don’t. I have the right to my own body.”

Jones further addressed the problems with the diversion program after a protest against it with the Sex Worker Outreach Project of Phoenix:

“I took the diversion program and it was like the worst experience ever.  It was humiliating.  They treat you as like just a thing.  Like [because] you’re a prostitute, this is what’s wrong with you.  This is what you need to be doing.  And like for me, I ’m proud to be a sex worker.  I’m not on drugs.  I’m not like one of these crazy people.  I just needed to make money for school.  And for a transworker they housed me in the men’s facility.  And I was humiliated there.  I was harassed by the DRCs there.  I was harassed by the inmates there.  And I was in isolation there full time for 15 days in a cell by myself.  And I did nothing wrong.  I was in there with murderers, child molesters and like rapists.  So I was in there with a whole bunch of the worst people you can think of.”

In contrast, johns who are identified within the program are asked only to attend “a John School where men arrested for buying sex have to undergo 6 hours of “schooling” regarding the nature of prostitution and they harm they cause the women as part of their sentencing.” Johns are required to spend only a sixth of the time being “educated” that sex workers are. Project ROSE doesn’t appear to have any programs or services aimed at pimps. It also doesn’t appear to make any differentiation between people trafficked into the sex trade against their will, and consenting adults who have entered the sex trade freely. Jordan Flaherty, a journalist who traveled to Phoenix to write about SWOP-Phoenix and Project ROSE, found that “…the police lieutenant that helped found it said basically he feels that everyone’s being trafficked, and the social worker that founded it also has a similar perspective. They really conflate the trafficking and sex work.”

If a sex worker doesn’t choose to attend the programming, or doesn’t qualify — because they have drugs on their person, or because they have prior prostitution arrests — they face jail time in a state with a prison system so harsh it’s made headlines nationwide. Recently and tragically, we learned of the death of Marcia Powell, who was serving two years for a prostitution conviction when she died because she was left in an outdoor cage in scorching sun for hours. The prison-industrial system is integral to Project ROSE’s model of sex workers and their rescue  — one that, as Flaherty reports, “just [doesn’t] see an alternative outside of the criminal justice system and they think the only thing they can do is to work within the criminal justice system. …they’re continually seeing all of these women—and it is 98% women who go through the program—all of these women as victims, but at the same time as criminals.” On top of the already inhumane Arizona prison system, Jones will have to navigate it as a black trans woman. Incarcerated trans women generally face horrific levels of violence from both inmates and guards, sexual assault, and severely limited access to medical care. Right now, the state of Arizona wants Jones to be held in a men’s prison, which is extraordinarily dangerous for her.

The question, then, remains: who is being rescued here? In what way would any of these choices provide real support or positive change? How does Jones — or any sex worker — benefit from her arrest and subsequent incarceration?

Jones’ arrest and conviction raise deeply troubling questions about how our governing bodies conceive of sex work and sex workers, as well as the value placed on trans women of color and trans women’s bodies. Given that Jones wasn’t engaged in any kind of sex work when she was arrested, is our legal system interested in punishing the act of engaging in sex work, or is it interested in punishing people who have ever engaged in sex work just for having done so? Given that Jones is being incarcerated for speaking out against a system that claimed to want to help her — for explaining that it does not in fact help, and that anyone who wants to help her should pursue other measures — how are we to interpret the program’s goals? Do its actions indicate that it’s interested in supporting trans sex workers of color, or that it’s interested in the social and political capital to be gained from purporting to rescue them? Which narrative does Project ROSE and other programs like it stand to benefit from more: the one in which Monica Jones is a strong and talented student, activist, volunteer in her community, and sex worker; or the one in which Monica Jones is a helpless victim of a trade that she isn’t capable of fully understanding or navigating her way out of? Jones’ incarceration through the program would seem to provide some clues.

SWOP-Phoenix is leading a pledge to defund Project ROSE and support Monica Jones; donations can be sent directly to Monica via Paypal at freedom.for.monica@gmail.com.