We were the first to report on the real identity of the woman who inspired “Alex Vause” in the hit Netflix series Orange is the New Black, and today Vanity Fair became the first news outlet to publish an interview with the lady in question, 51-year-old Catherine Cleary Wolters. Vanity Fair reports that Wolters is currently working on her PhD in information technology, assurance and security, has written three unpublished novels and “exhibits a flair for the philosophical.”

In our article about the real story behind Orange is the New Black, we explained that the drug ring both women were involved in was busted in 1994 when a courier was arrested at Chicago O’Hare and then named other participants, including kingpin Buruji Kashamu, known to Piper Kerman and associates as “Alhaji.” Alhaji’s anticipated extradition to the US for trial delayed Kerman’s sentence for six years, from 1998 to 2004. Kerman was among fourteen indicted parties, including Catherine Wolters and Catherine’s sister Ellen, who was actually Kashamu’s lover for a time. Kerman wrote of Ellen, “I thought she was just a Wiccan heterosexual version of her sister, but apparently she was the lover of a West African drug kingpin.” In the book, Piper and Catherine don’t see each other until about a month before Kerman’s release date, when they’re both shipped to the Chicago MCC, along with Ellen, to testify against another member of the drug ring. While incarcerated in Chicago, they tentatively become friends again and eventually become cell-mates and allies under really unpleasant conditions.

Vanity Fair confirmed that Kerman and Wolters were only imprisoned together for five weeks, during which time Wolters assures us that they did not have sex: “We did not have sex in prison. Not even a little bit.” This is consistent with Kerman’s memoir — at the time, Kerman had been dating her now-husband Larry Smith (who is about a million times cooler than the television version of Larry) for seven years.

Of their brief reunion as friends in Chicago, Wolters told Vanity Fair:

“We were ghosts of the humans we had once been, milling about amongst hundreds of other human ghosts, shackled and chained, prodded through transport centers at gunpoint, moved through holding facilities.”

Wolters also provided her own version of events regarding her relationship with Kerman. In Kerman’s memoir, Kerman graduates from Smith as an out lesbian and “a well-educated young lady from Boston with a thirst for bohemian counterculture and no clear plan.” She meets Catherine, a member of “a clique of impossibly stylish and cool lesbians in their mid-thirties,” who Kerman describes as “a short, raspy-voiced Midwesterner who looked a bit like a white Eartha Kitt.” 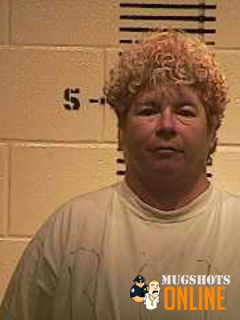 Before long Kerman was traveling with Catherine to exotic locations and helping her transport money, but she eventually tired of being left alone in unfamiliar countries, being asked to transport drugs and suffering through Catherine’s frequent squabbles with her business partner and in 1993, moved to San Francisco and cut all ties with Catherine.

Wolters told Vanity Fair that the relationship didn’t begin until they started traveling together: “When we were traveling together I started developing a crush on her. And eventually that turned into a crazy mad love affair. But that was after she had already done the deed that made her complicit. We weren’t girlfriends. We were friends with benefits . . . I was not the older sexy, glamorous lesbian who snatched her from her pristine Smith College cradle.”

In a statement to Vanity Fair responding to Wolter’s statements, Kerman said:

I’m glad Cleary is getting the chance to tell her story, because she is a charismatic and funny person. It should come as no surprise that we may have different points of view about the time we spent together. I think anyone would understand that my relationship with her was, and is, complicated. What I wrote about us in my book is true. If Cleary believes we were never girlfriends, that is startling news to me, though it’s certainly not the first time she has surprised me.

I was an out lesbian when I met Cleary, and dated many women before and after her (Larry Smith is the only guy I’ve ever considered a “boyfriend”).

The majority of the material from the Netflix series identified by Wolters as inaccurate has never been presented otherwise —  as we detailed, the Netflix series is inspired by the memoir, but is far from an accurate depiction of events described therein. As Kerman told Vanity Fair: “We certainly did not have sex in prison, and that should be quite clear in my book. The relationship between the characters in the Netflix series, Piper Chapman and Alex Vause, is fictional.” 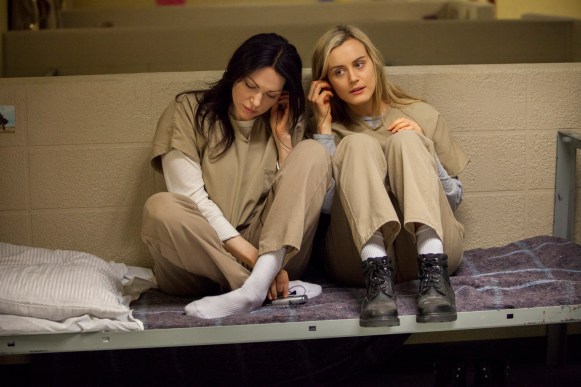 Alex Vause & Piper Chapman in “Orange is the New Black”

But although Kerman and Wolters didn’t do the horizontal mambo in prison, Wolters confirmed that the deed was indeed done, and often. Wolters says they’d usually have sex in their jail rooms but that really “you’d have sex anywhere you could: the tennis court, the outdoor squash court, or the rake pile. Anyplace! When the guards aren’t around all bets are off. Everyone goes to it!”

Vanity Fair reports that Wolters says she has been under the supervision of the criminal justice system for almost 20 years, having serving six years for conspiracy to import heroin and finally completing her parole period on April 10th, 2014. Now, Wolters hopes to find love again, possibley with one of her “two wives” from prison, who she says “were sexy,” further noting, “One looked just like Jennifer Lawrence.” She’s also working on her own memoir, Out of Orange.

Wolters feelings on the show are mixed. On the one hand:

“This story isn’t about a fun ride through some old familiar haunt, giving me little glimpses and peeks of some fond old stomping ground. Christ, it’s my nightmare, the one that wakes you gasping on your rubber legs that won’t run. . . . This stress is real, it is unrelenting. I’ve had a heart attack, a five-way bypass, been judged, humbled, and hobbled, but I made it.”

On the other hand:

But I watched, and of course I’ll watch the rest. I can’t help it. It’s a great show. The actors are incredible, the story line is interesting, and come on, who doesn’t want to see Donna from That ’70s Show have lesbian sex?