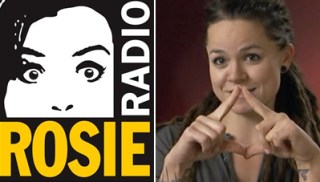 One woman clearly NOT on IFC’s blacklist is Rosie O’Donnell, who’s been rolling out the Real L Word ladies on the regular this week. This time our very own Clam Mistress Whitney is in the hot seat, ready to field Rosie’s questions about the wild and crazy lesbians of 2010. As in Rosie’s interview with Rose Garcia, Whitney is proven to be much more than what meets the eye. She’s revealed to be a smarty-pants with two Bachelor’s degrees and LSAT scores on record, as well as a talented artist pursuing a commendable career in art therapy [though she’ll prob wait until her 15 min of strap-on inspired fame are up].

+ Audition process: “They wanted to make sure that we weren’t one dimensional.” Why bother?
+ Whitney “went from looking like a girl to looking like a boy almost overnight” and it was completely accepted thanks to her comfortable confidence
+ Despite Romi telling us that they were so wasted they didn’t know the camerawoman was in the room, Whitney fesses up and says they obviously knew they were being filmed
+ Whitney wants Rosie to take over the Vagina Lady‘s role and MC the next cream corn wrestling match but Rosie recognizes brilliance when she sees it: “I feel as though that announcer girl with the weird hat had it down.”
+ Dreadlock maintenance serious business and Whit will walk you through it 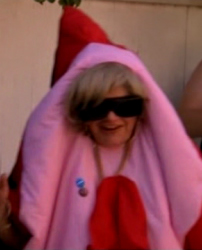