SO YOU THINK YOU CAN DANCE, ELLEN DEGENERES? WELL, GOOD NEWS, YOU CAN:

As has been expressed more times than necessary, I h8 reality television shows, especially reality docu-series and also especially the competitive shows where they take extra-long pauses and needless two-hour-long finales to whittle a judging pool down from 2 to 1.

Unfortunately I do not live alone in a cave and occasionally I am subjected to certain televised experiences based on their proximity to the person who just made dinner. Anyhow, So You Think You Can Dance tends to be one of the better ones because of the singing & dancing. AND LAST NIGHT SOMETHING AWESOME HAPPENED AT THE END. I even had to turn around from my I’m-protesting-the-television position (back to the TV, it’s easy) and feel feelings like JOY! and DELIGHT! and SURPRISE!

Also, hey look, there’s a straight teenage guy and a 52-year-old lesbian dancing on the teevee and a million people are cheering exuberantly. That was nice. OH MY GOD it was so good, just watch it, it will make you smile.

“We worked with her last year (on her show) and she’s such a fan of dance,” Tabitha recalled. “She told us, ‘I’m on my summer break and I’m a little bored, let’s cook something up.'”

Napoleon added, “I think she was thinking [of doing something for] National Dance Day, and then something for the opening of her show again, and then Tabitha mentioned doing this.”

“She was such a fan of the number and so sad that Alex got injured,” Tabitha explained. “She was like, ‘I’m so devastated. I loved him.’ So I said, ‘Why don’t you learn his dance?'”

At the time, Napoleon protested, “Why did you tell her to learn that one? It’s really difficult!” but Tabitha told him, “I think she can do it.”

How long did it take Ellen to learn the routine? No longer than Alex himself had, said Tabitha: “She had maybe a week to rehearse. We only had hour rehearsals here and there.”

Obviously, the routine needed some modification, but not as much as you might expect. “I think the only thing that we trimmed down to make it a little bit easier was the ballet moment when Alex had his leg to his ear. OK, Ellen isn’t able to do that. But we played on her strengths: her comic timing, the slapping, but really step for step, it was almost the same routine.”

“For her to go out there and just roll it off in front of that many people, live, is just amazing,” Napoleon raved. “The choreography in that routine is really difficult, but she did an amazing job.”

Ellen powered up pre-show at a Vegan Lunch with Portia De Rossi: 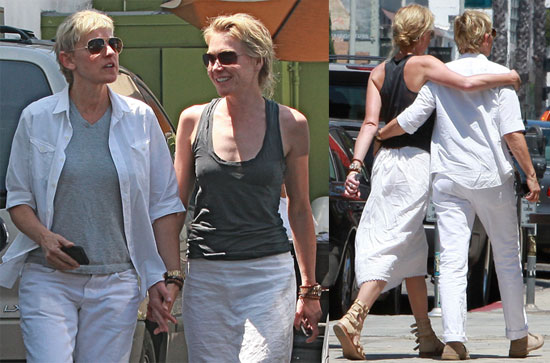