If you watched Rachel Maddow’s show featuring the former West Point cadet Katherine Miller and two other soldiers discharged under DADT, you’ll already have heard her incredible call on President Obama to stop the discharges. But if you didn’t, Pam’s House Blend has the full transcript of her calling on Obama to “stand up for what’s right” and end DADT for you here:

What’s the rush? Why are we kicking people out now, in the meantime, while we are waiting for the views of the commander-in-chief and the defense secretary and the chairman of the joint chiefs-of-staff to be implemented?

Part of what Maddow addressed in her speech was the case of Lt. Col. Victor Fehrenbach, who is expected to be discharged under DADT any day now. 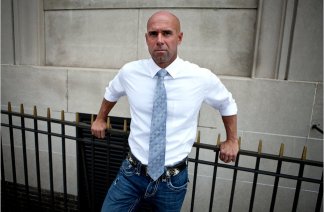 He would be one of the highest-ranking officers to ever be affected by the policy, and also pushing the envelope as far as what qualifies someone for a discharge (kind of like the case of Jene Newsome, who was discharged when police “saw her marriage license through her kitchen window”) because military guidelines state that accusations of homosexuality must come from “a credible source” and the sexual harassment suit that originally led to the investigation of Fehrenbach’s sexuality was dismissed. Reading that Fehrenbach was described as “a proven leader who raised morale in his unit” by superiors really puts Maddow’s question into perspective: Why are we doing this? Who is it helping? (@nytimes)

It turns out that when you donate $150,000 to a homophobic Republican candidate, an apology isn’t enough to make gay people forget about it! Target has said it’s sorry, but angry gay customers are threatening to oppose the construction of two new Target locations in San Francisco, where they have enough political power to bring Target’s expansion to a halt. “Among the bullets in our gun is their continued relationship with the LGBT [lesbian-gay-bisexual-transgender] community,” [the vice president of HRC] said. “Gay and lesbian customers are among Target’s most loyal customer base.” The company is seen by many in the gay community as “the progressive alternative” to Walmart.” Some wonder whether this will pressure other corporations to be more responsible about political donations, or just make them more likely to donate anonymously.

When we read this, the first thing we said was “Ohmigod, this feels just like reading that Newsweek article.“ William Black breaks down why conservative homophobes were so angry about the Prop 8 trial in California – because they don’t think they should have to provide any justification for their views (or enforcing them legislatively), and are actively looking for ways to avoid doing that. “The disaster he fears is any fair trial because it will expose the fact the attacks on gays are baseless. He recognizes that this will cause immense harm to those that wish to discriminate against homosexuals by exposing their bias and by demonstrating that gays are normal rather than demonic… Bradley was so convinced of the anti-gay forces’ inability to provide a rational basis for prohibiting homosexuals to marry that he proposed three strategies to restore the right to discriminate against gays… He knows that he could not demonstrate this claimed rational basis if a trial were held at which he had to prove his assertions.” (@huffpo)

David Hansell is the acting head of the Administration for Children and Families at the US Department of Health and Human Services. He is also gay. Many conservatives are upset about this because it means that Hansell is now in a position to put gay juice in the water, like fluoride, and turn all of American’s children into Broadway stars and softball players respectively. “From what I can see, our government has been infiltrated from top to bottom by a bunch of pervert butt plumbers and carpet cleaners… They are a minority with speical rights to sexually dominate the adults and children society now. We thought feme-nazi Dykes were bad. Just wait. Hetersexual men and boys are going to suffer even more.” WATCH OUT, HETERSEXUALS! (@holybullies)

An article from the LA Times that breaks down for you exactly what the future of Prop 8 looks like: where it’s headed next, and what it will take for its defenders to save it in court. (@latimes)