While it’s OK for straight actors to play gay (as Jake Gyllenhaal and Heath Ledger did in Brokeback Mountain), it’s rare for someone to pull off the trick in reverse. De Rossi and Harris do that on TV, but they also inhabit broad caricatures, not realistic characters… As viewers, we are molded by a society obsessed with dissecting sexuality, starting with the locker-room torture in junior high school. Which is why it’s a little hard to know what to make of the latest fabulous player to join Glee: Jonathan Groff, the openly gay Broadway star. In Spring Awakening, he showed us that he was a knockout singer and a heartthrob. But on TV, as the shifty glee captain from another school who steals Rachel’s heart, there’s something about his performance that feels off. In half his scenes, he scowls—is that a substitute for being straight?

BTW in Spring Awakening, Groff played the heterosexual lover to Lea Michelle‘s character… and they even had sex on stage! So, Ramin, how exactly did that coupling work out so hearthrobby… but in GLEE, it’s no longer believable (to you)?  And I’m sorry, but did you even see Promises Promises? Have you seen ANYTHING on Broadway, Ramin? ‘Cause there’s a lot of gay men playing straight, just saying. They’re also playing lions, phantoms, and cartoon characters. Crazy! Acting is sooooo funny that way, huh?

The article also selects Cynthia Nixon, Kelly McGillis and Anne Heche as examples of actresses who were with men during the height of their popularity and therefore the audience “accepted” them in their hetero screen roles. This is factually inaccurate, but does that even matter?

If an actor of the stature of George Clooney came out of the closet tomorrow, would we still accept him as a heterosexual leading man? It’s hard to say. Or maybe not. Doesn’t it mean something that no openly gay actor like that exists?

Riese’s Special Comment: This Newsweek writer, Ramin Setoodeh, is a mysoginistic self-loathing asshat who also coincidentally loves ass-sex. I know! Weird, right, that an out gay man would be such a ‘phobe? Setoodeh has a serious job at a respected newsmagazine and he is talking the conservative crazy. And you know who reads Newsweek? Everyone. Because they always have it at the gym, the dentist, and in the waiting rooms of America. Children, teach your parents well – Ramin’s agenda is not our agenda.

Let’s look at some of Ramin’s prior work for Newsweek!

– In this piece Ramin enlightens us about the real reason we lost the same-sex marriage vote in Maine last year: Adam Lambert‘s mascara & lip gloss, Kurt’s soprano solo of “Defying Gravity” on Glee and the “flaming fashion assistant” Marc from Ugly Betty. The article is so kindly titled Kings of Queens, and I hate it:

“… if you want to be invited to someone else’s party, sometimes you have to dress the part. Is that a form of appeasement? Maybe. It’s not that gay men and women should pretend to be straight, or file down all their fabulously spiky edges. But even Rachel Maddow wears lipstick on TV. The key is balance. There’s so much more to the gay community than the people on TV (or at a gay-pride parade). We just want a chance to live and love like everybody else. Unfortunately, at the rate we’re going, we won’t get there until the post-post-gay generation.”

– All that stuff you heard about there not being enough ladies in Hollywood? What’s that you heard? Only 7% of the top 250 grossing films were directed by women? Only 8% written by women? Only 17% included female executive prouducers? WELL Ramin is singing a different tune in this pre-Oscars article: “Hollywood might be a boy’s club, but the Oscars are all about the girls.” Who knew? I love trend pieces based on one or two examples, projection and opinions stated as facts.

–  In which he likens the critics who disliked Sex and the City: The Movie’s overly commercialized product-placement-heavy boy-crazy regressive overpriced love story to the critics who disliked Hillary Clinton and her campaign:  Sexism in the City: What’s up with this vicious bashing of the “Sex and the City” movie?. Ramin loved SATC: The Movie, he found it to be a great uplifting film for women that made women queens of the box office.

–  In Taking the Wonder out of Wonderland, Ramin explains why he hated Alice in Wonderland. See, Alice’s character has “unfortunately” changed with the times; he preferred 1903’s “children should be seen and not heard” Alice or “perky Shirley Temple” Alice from the 30s. His primary concern with Tim Burton‘s film (which we loved! See Alice in Lesboland: A Wonderland for Feminists, Revolutionaries & Your Mom!) echoed in the review’s intro and conclusion, is as follows, and really doesn’t make much sense (and utilizes the strange condescending misogynistic tone he can’t seem to get enough of):

INTRO: “One of the best running gags in [the original] is that our little ingénue is constantly eating. When Alice falls through the rabbit hole, the first thing she does is drink a cherry-tart liquid and devour an entire cake labeled EAT ME. When she meets the hookah-smoking caterpillar, he offers her a mushroom and she nibbles on it for quite some time. No wonder she gets the munchies. But food is really just a setup….”

CONCLUSION: … Alice [in Tim Burton’s movie] is beginning to look malnourished, just like all the teen starlets you see on magazine covers. In Burton’s film, she doesn’t eat very much at all. She bites into what looks like an Atkins-size cupcake and drinks a few potions, but she’s apparently lost her sweet tooth on the way down the rabbit hole. Alice is starving, despite the fact that the movie is a feast for your eyes.”

I don’t even know. It’s like he thinks he’s being sensitive to women for mentioning “the teen starlets on magazine covers” who wound our egos while simultaneously judging our female lead entirely based on her body size and food consumption, ignoring virtually every other aspect of the movie?

Basically Ramin takes his opinion, changes the “I thinks” to declarative statements of facts, and turns them in as articles, and then your parents read these articles at the dentist.

After going through several archives of consistently offensive work to compile my special comment, I googled Ramin’s name, seeking hexes or curses perhaps placed in his honor, and I found something just as good: AfterElton has been hating on this dude forever and they didn’t like the article this week either. (@newsweek) 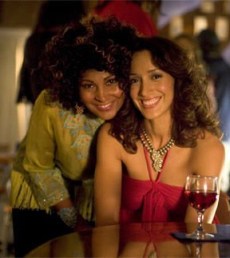 Baby Girrrrrrrrrrrl, did you know that Kit Porter has written her memoirs? She talked about it with Dani Campbell in her Autostraddle Interview! Apparently, there is some pretty crazy shit in there, including the revelation that she and Richard Pryor broke up in part because his cocaine use had led to a dangerous buildup of the drug in her vagina. Really, Papi. (@jezebel)

Melissa Etheridge finally opens up a bit about her breakup from Tammy Lynn Michaels: “It’s been a long time coming. It’s hard, as any of these things are. It’s hard to do it in public because there’s no easy sound bite to say, this is what happened and so this is what’s going on. And even if I did, the perspectives would always be different so there’s a lot of sadness. And yet, she’ll always be in my life because we have two children.” (@okmagazine)

Johnny Weir appeared on The Wendy Williams Show and responded to Evan Lysacek’s claims that Stars on Ice didn’t invite Weir to participate in the tour because he’s not good enough. “Even if they asked me today, I wouldn’t do it,” Weir said. And Evan… he’s a slore.” Get it? A combination of “slut” and “whore.” That’s so fetch! (@advocate)

Chris Colfer (Kurt) talks to The New York Post about the future which he loves!

PW: One of the big plans for season two is introducing a boyfriend for Kurt, any idea if you’ll have a say in casting?
Chris: I have no idea…. hopefully I have no input, because I’m very vain and the only input I really want to give is that I need to be the better looking half of the couple. I don’t want to be the weak link or have people think, “What’s he doing with Kurt?”

PW: Are you excited to portray the next step in an emerging gay’s journey?
Chris: I really am and I get more and more excited every day. I know it’s going to bring up so much more great stuff with Kurt & Burt – I live for the father/son scenes. It’s so special. And I think there’s going to be a lot of good comedy stuff that’s going to come out of it as well, which is good because I feel like so much of what I’ve done has been dramatic. I want to stretch my comedy legs as well.

Last week, Ellen talked about a mystery animal that Portia saw outside their home, and she’s determined to figure out what it was. Today she brought Portia on the show to talk to a sketch artist and a mammalogist.