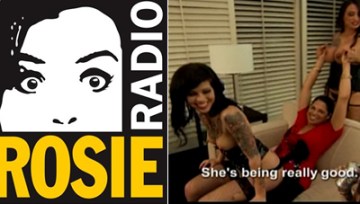 If you’ve been keeping up with our Real L Word free-publicity-extravaganza you’re already familiar with Rosie O’Donnell‘s confusing take on The New Lesbians. Well, today she interviewed her favorite representative of this new and unusual species of lesbian: Rose Garcia. Take a moment to let that marinate.

The interview exposes Rose as an intelligent, well-spoken and charming individual which makes her image as an emotionally abusive pseudo-cheater even sadder than we thought. Rosie is particularly taken with Rose’s loving family and has her delve further into her background shedding some light on her strained relationship with her mother.

Putting it lightly, Rosie O’Donnell is fascinated by and obsessed with this show. She not only wants an invite to Nikki & Jill’s wedding in October but actually wants to appear on an episode of the non-existent second season with Whitney and Rose as Rosie’s guide to the land of alcohol guzzling, womanizing LA lesbians. Can’t wait!

Although Rosie promised listeners that she would nail Rose for her treatment of her long-suffering girlfriend Natalie, she shied away from that topic, instead putting Rose in the slightly awkward position of having to convince us that Mikey doesn’t have a problem with the drinky drink.

Does this change your opinion of Rose Garcia?