In the pilot of Freeform’s new summer drama, The Bold Type, the editor in chief of Scarlet says to the people attending the magazine’s 60th anniversary gala that yes, it’s a fashion and beauty magazine, but it’s not just a fashion and beauty magazine. “Here’s the next great mascara, to give you bigger eyes to see the world,” she says. “Here’s a fabulous pair of jeans; now, go climb a mountain.” It’s a recurring theme in the show’s first two episodes, the Scarlet staff — including our main characters: newly promoted writer, Jane; social media director, Kat; and executive assistant, Sutton — pushing back against the idea that a “women’s magazine” can’t be a feminist magazine. 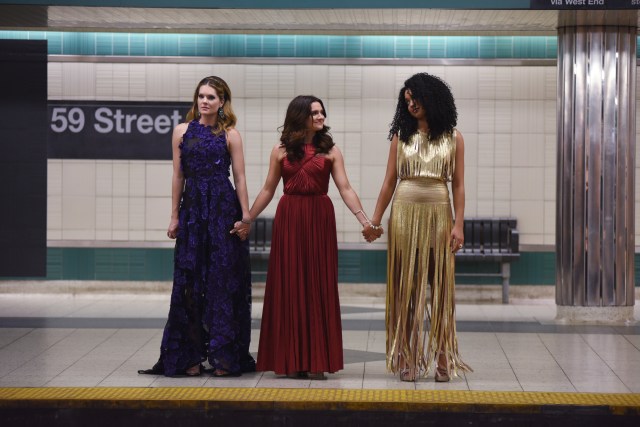 This is way too clean and dry and well-lit to an actual NYC subway station, FYI.

Social media director Kat takes Adeena’s skepticism as a personal challenge. She visits her in her studio, where she’s photographing Muslim women holding signs that describe their life experiences and interests in a way she hopes will reveal their humanity to a country steeped in Islamophobia. Adeena defies Kat’s claims that Scarlet is a political publication, and Kat challenges Adeena right back. They dance around each other, both unapologetic in their claims on feminism, and finally find common ground in the “Mount Up and Ride” cover story vibrators, which pique Adeena’s interest when she visits Scarlet‘s office because they’re illegal in her home country (which the writers never describe beyond a vague mention of the Middle East).

As Kat helps her disassemble and pack up the sex toys like contraband, they talk about why Adeena still wears her hijab and whether or not Kat is queer. Kat says she’s not, but there’s something humming between them and they both know it. By the end of the night, Adeena is so charmed she agrees to let Scarlet publish her photos.

And then she gets arrested in the airport when she arrives back home.

Kat’s not the only one with intersecting work and personal crises. Jane has trouble executing her first assignment as a Scarlet staff writer. Her first pitches fall flat and the one Jacqueline latches onto — how to stalk your ex when they’re not on social media — means Jane has to confront her first real heartbreak, literally, and find answers to all the questions she’s been pummeling herself with since her boyfriend left her on her birthday in the middle of Grand Central Station. Sutton is trying to navigate a blossoming (secret) relationship with one of the board members. 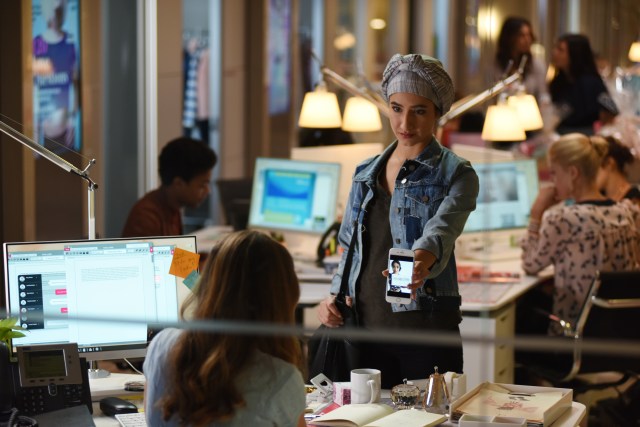 Is this your friend? The bisexual social media director who’s absolutely bisexual?

It’s rare for a pilot to bring even one character arc to a satisfying conclusion, as everyone usually get bogged down in expository dialogue about their clunky decisions, but The Bold Type manages to sketch out Kat, Jane, and Sutton; color in the lines of their characters; and take all three of them on a journey that ends in personal triumph. By the episode’s end, it’s hard not to feel invested in all three of them, and in their friendships with each other. Also, miraculously, in Jacqueline’s relationship her magazine and the women who work for her. You think you’ve seen her character a dozen times before, just another paint-by-numbers Miranda Priestly. And sure, she’s a boss and she’s not sorry for it, but the power she has over the women who work for her is freely given. She’s so much more than stone cold ambition.

The show’s second episode, “O Hell No,” which aired back-to-back with the pilot last night, expands on the groundwork it laid in the first 42 minutes. Kat visits Adeena’s art show when she comes back to the States and does another “I’m not queer but I’m definitely saying I’m not queer too much to not be queer” waltz with her. Jane struggles to get out of her own head and preconceived notions about what a “real” writer is. She doesn’t want to be just another sex columnist. Sutton has dreams of becoming more than an assistant (and a girlfriend), but they’re not specific; she hasn’t found her path forward like her best friends. And Jacqueline is still full of sage advice and unblinking, eyebrow-popped gazes when she’s waiting for an answer to the incisive, gut-check question she just asked. 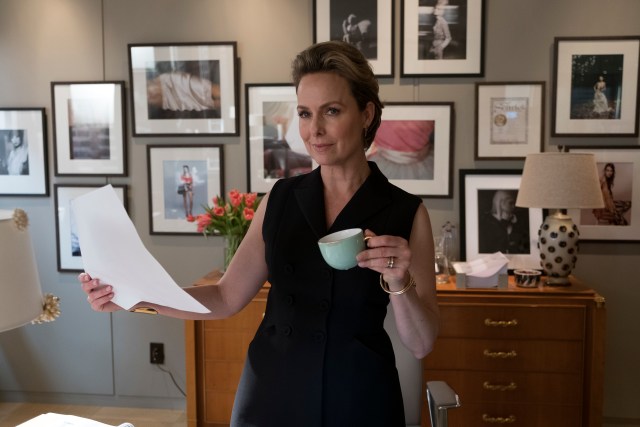 The Bold Type‘s ability to pull off so many small feminist victories in just two episodes is fun to watch; that those feminist victories exist in this format is extra exciting. Freeform’s TV shows are focus grouped to absolute death. Read The New York Times review of the series if you need proof. And what Freeform discovered on their recent deep dive into What Young Women Want is exactly what the fictional Scarlet magazine strives to give to its readers: “It’s feel good, it’s sexy, and it’s just the right amount of political.” Kat, Jane, and Sutton pep talk each other with SnapChats of Elizabeth Warren captioned “Persist!” The magazine company they work for is called Steinem. They promise, right out loud, to crush the patriarchy. When Jacqueline addresses the people gathered for the 60th anniversary gala, she says, “You are the women and the men who work at Scarlet.” It tugs on your ears because you’ve heard the “men” before the “women” all of your life. Every feminist has to start somewhere.