“Mia McKenzie’s The Summer We Got Free answers Toni Cade Bambara’s question “do you want to be well?” with its own. Do you remember what I was like when I was? The novel won’t let you go as it surges forward with truth only fiction can tell. I was eager for answers as I followed a trail of not breadcrumbs but whole pieces of toast slathered in butter that makes you moan or as I did, read passages aloud and neglect sleep for want of the next savory morsel. The Summer We Got Free is the product of a girl child grown up in the stories of June, Alice, Zora, Pearl, Gloria, and even Octavia, told in palimpsestic time where McKenzie’s own life doesn’t overlap with her characters but it doesn’t even matter. Ava is the black girl who reminds us that we are the ones we’ve been waiting for, to the delight of some and the displeasure of others. McKenzie’s masterful weaving of narrative belies an inaugural effort yet it is clearly an afrofuturistic vision of healing transformation and an affirmation that we have what we need. The text is saturated with an effortless queerity and a brush of magical realism that show what’s possible when you focus off center. I’ll be thrusting this into the hands of everyone I know as I return to it myself to remember I can get free again.” – Moya Bailey 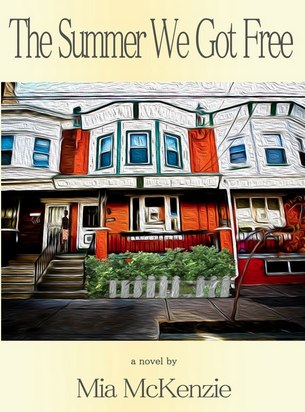 I had hoped this blurb for the back of the book would suffice; I was nervous about saying more. The Summer We Got Free hit me on such a personal level I didn’t want to go deeper publicly lest I have to say how this book touched me to my core.

The Summer We Got Free is the first novel from Mia McKenzie. It tells the story of Ava, a girl whose fire warms up everyone around her, but who becomes a woman whose spirit has been tamped down by trauma. Through flashbacks, readers come to understand the social forces that propelled Ava to turn inward and we delight in the queer spark that reignites her passions.

Ava has a twin brother Geo and an older sister Sarah. They are the progeny of George and Regina, class mobile Black folks in Philly who move into a new neighborhood. Ava suffers the trauma of losing her twin brother, a friend, and becomes a pariah in her community at a young age. These events change her, contributing to the Ava to whom readers are first introduced.

I don’t dare give away too much but the story kept me. The last sentence on page seventeen was what hooked me. “Black as forever, Ava would say of her, years later. Black as always.” This text is but a sample of the rich description and vivid imagery McKenzie brings to the work. The novel is littered with beautiful word arrangements that had me rereading passages again and again.

I’m being a bit vague as so much of what makes the ride worthwhile are the twist and turns you don’t see coming. The Summer We Got Free is a story of family, of generational healing and the power of queerness. I was pleasantly surprised by the magical realism elements. It was yet another example of the risks McKenzie takes as a first time novelist.

I was left with a feeling of fearlessness on the part of the author. McKenzie is not afraid to take her characters to the truths only they can reveal. There’s no holding back. To paraphrase author Yolo Akili, this work is able to achieve so much because it is builds on the legacy of so many feminist foremothers and brothers but the decidedly queer elements of the text push it further. Only a Black Queer woman could have written this book and gotten her characters free as McKenzie does. You will undoubtedly see the influence of Morrison, Butler, Bambara, Baldwin, and so many others in McKenzie’s writing style.

While it’s easy to laude this book ad infinitum, I did have some concerns. Namely that for such a queer book, we mostly glimpse the unsatisfying lifeless sex of straight identified characters. I mean, it makes sense within the logic of the story but a little more queer loving would have been nice. I guess I’ll just have to wait for some femslash fanfiction. And mostly I just wanted to know more, what happens to Ava’s husband and what really happened to Geo?! These unresolved loose ends don’t spoil the story but leave me slightly unsated like a good book should.

The Summer We Got Free is well on its way to join the ranks of canonical Black Queer literature. It’s a finalist for the Lambda Literary Award as well the impetus for an Atlanta wide QTPOC book club. I can’t implore you enough get this book! Or as I did get nine and spread the love! Make this the summer that you (and yours) get free! In the meantime, here’s an interview with the author.

AUTHOR INFO:  Moya Bailey is a scholar of critical race, feminist, and disability studies. Her current work focuses on constructs of health and normativity within a US context. She is interested in how race, gender, and sexuality are represented in media and medicine. She is the co-conspirator of Quirky Black Girls, a digital collective of strange and different Black girls. She is a blogger and digital alchemist for the Crunk Feminist Collective. She also co-curates the #transformdh initiative in Digital Humanities.

Moya has written 1 article for us.