When it comes to applauding global gay rights, Canada is always on the podium, winning an award without even trying. Ever since we started performing gay marriages almost a decade ago, queer couples from far and wide have been tying the knot at a steadily increasing rate. We’re at the point where we’re creating museums to recognize how much this simple act has changed the Canadian landscape. In Québec, gay adoptions are being seen the new normal. But gay marriage and children aren’t the be-all end-all. There are other pressing issues like tolerance and, more importantly, acceptance to worry about. Even with protections in place, some laws still can’t dissuade some people from being bigots.

A recent survey of 800 Québecers showed that even though 90% had no issue with gay marriage, 40% were uncomfortable seeing Real Life Homosexuals. While government agencies could simply applaud the acceptance rate, Québec leaders focused on making homosexuality more palatable for the public. Though they couldn’t put kissing lesbians on every street corner, they did find a way to let people see PDGay for themselves. 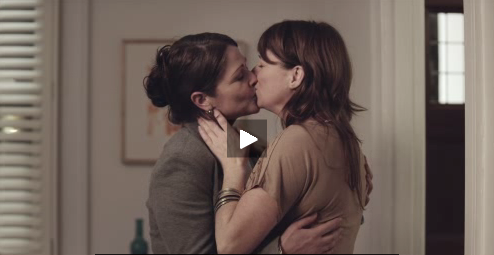 Does that change what you thought 20 seconds ago? Fight Homophobia

Starting in 2011, Justice Québec drafted the Government action plan against homophobia to figure out how to combat the H word. Amid the 40 recommendations, it focused on four major issues: establishing an office to fight homophobia, creating a university research chair position, increasing financial support for community LGBT organizations and raising awareness of homophobia and sexual discrimination around the province. They met two goals in 2011 by establishing the Bureau de lutte contre l’homophobie and appointing Université du Québec à Montréal’s Dr. Line Chamberland as the research chair under a $475,000 five year grant. Between 2011 and 2012, the government spent $590,000 funding crisis help centers, pride celebrations, as well as school and community outreach programs. Now it’s time to make it a home run.

Justice Minister Bertrand St-Arnaud, the minister in charge of the fight against homophobia made a press release on Sunday.

Québec is being recognized internationally for its respect of fundamental rights and freedoms, regardless of individuals’ sexual orientation or sexual identity. However, there’s still a long way to go before social equality is on par with social equality.

In the release he announced a new ad campaign that will run from March 3rd to the 31st, asking people to self reflect on their own prejudices. In two commercials airing on French television networks, a man seeks his partner at the airport and a woman walks in on her surprise party. Both actors show a glimmer of recognition in their eyes as they pause before a man and a woman, giving the viewer a moment to wonder which person they’re smiling at. In the English radio ad, the listener eavesdrops on a couple’s evening plans.

(SIGHS) Honey, do we have to go to your parents’ place for dinner tonight? I mean… your dad’s just gonna to take me upstairs and show me some new stamp he bought for his collection…right… and besides we were just there like… what… 4 days ago?

(SMILING) Nice try! That was 2 weeks ago. Now get your coat.

The viewer soon realizes that none of these pairings represent heterosexual couples, leaving the announcer to ask, “Does this change what you thought a few seconds ago?”

The ad campaign relies on simple scenarios and self-reflection instead of hard-nosed tactics trying to shame the viewer into coming around. Although Montréal has the second highest population of gays in Canada, the island only represents 45% of Québec’s population. While it’s easy for us to say that anti-homosexual viewpoints are wrong, sometimes it’s a simple case of ignorance instead of venomous bigotry. In a province often divided by language, economics and geography, it can be challenging for people to access the education they don’t even realize they want.

Bureau de lutte contre l’homophobie heeded both calls by creating Lutte Homophobie and Fight Homophobia as complementary websites to service both populations. A quiz surveys how open-minded viewers are by putting them into different scenarios where they might be confronted with the face of LGBT. Would it matter if your child’s schoolmate had two mothers? What if your coworker hadn’t always been a woman? What do you think when you see two men in a bus shelter sharing a bench and a kiss?

This doctor has always been bisexual. via Fight Homophobia.

For people that realize they’ve been going about their lives in a misguided way and seek change, the site’s information and resource pages let people know what they can do to make a difference. From trying to destigmatize bisexuality and the inclusion of trans* in the DSM to recognizing that POC might not identify with a predominantly white LGBT community, the site offers insight and outreach for people living throughout Québec. Instead of asking “Why were you so wrong?” it asks, “Where can we go from here?”

As we’ve all unfortunately seen, people don’t react well when you call them out on their shit. The sites simply remind everyone that gay people are around, and (in an infinitely more polite way than I could ever say) they had better fucking deal with it. This year the campaign works on visibility and next year they’ll tackle the more controversial issues of same-sex parenting and overall acceptance. Even though giant displays of PDA, gay or otherwise, will probably never be welcomed, a few more couples should feel free to hold hands or give each other a peck without being asked to leave. Because really, discrimination should be the only thing that bothers you.