When I heard that there was a film at Sydney’s Mardi Gras Film Festival that centered around a fat-positive synchronized swimming team in Melbourne, my fingers tripped over each other in their haste to find the “buy tickets” button on the festival website. As I said to my friends who I went to see the film with, “If they just set it in space, this film would be *made* for me.” 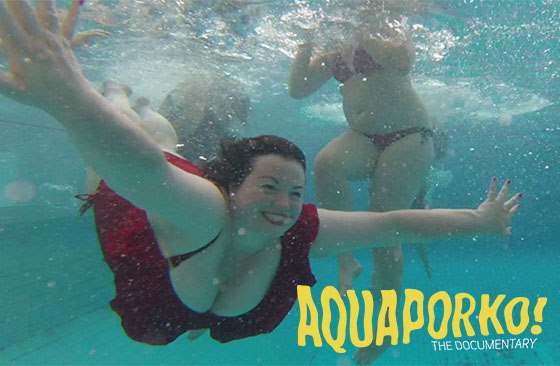 I have strong feelings about body politics. I love exercise and think more people should do it, but I don’t that changing the way your body looks should be the main goal. I believe that health comes from joyful movement, not from a scale or a measuring tape. The greatest bearers of our culture’s obsession with beauty culture are fat women. We live in a society that pathologizes their bodies and sees them as diseased, disgusting, asexual, inhuman.

I also have strong feelings about synchronized swimming. I first started synchro, as we call it, when I was eleven years old. I’m still not quite sure if the main reason why I joined was because I was enthralled by the sport or the coach’s daughter, but I stayed because of the love and camraderie I felt from my teammates.

I swam on two teams during my six-year career. The first was populated with homeschooled conservative Christians, but they accepted me despite my liberal leanings and public school education. This was during a time in my life when I was enduring daily abuse from my classmates and the fact that the girls at synchro practice saw fit to put their trust in me sustained me through those difficult years. 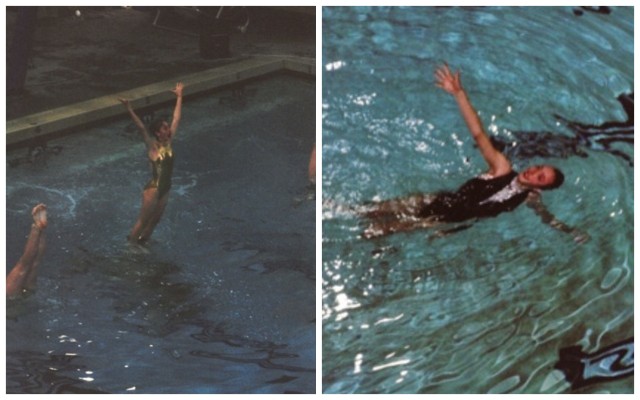 I joined my second team after my family moved from Olympia to Kirkland, a suburb of Seattle. I had two choices at that point: I could join the super-serious-business team that was closer to my house or the more laid-back team up north in Mountlake Terrace. I decided to go with the second. It was my perfect team, full of beautiful weirdos just like me. My coach from that team is like family – she even came to my wedding.

Competing for me was never about winning gold medals, because I didn’t have a chance of that. (The only routine I ever swam at a national level finished at second-to-last place.) For me, meets were an opportunity to show off my skills and see how much I could impress the judges this time. It was about spending time with my friends from other teams. It was about doing something beautiful with my teammates.

Aquaporko is a synchronized swimming team for voluptuous, curvy, big boned and/or fat people. Its aim is to provide a place where fat folks can enjoy the pool with other like-minded, like-bodied people. The documentary shows some ‘Porko practices and their watershow, intercut with conversations between the filmmaker and the team members about fat acceptance, identity and what it means to them to be a queer fat femme. 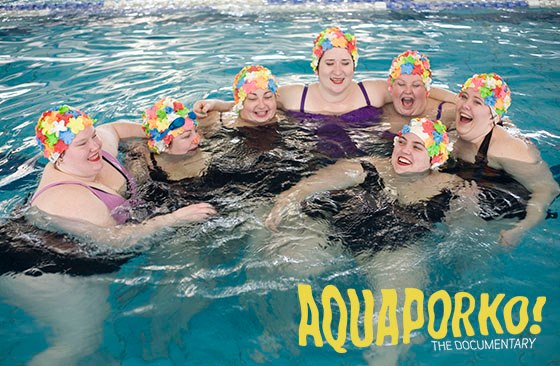 The women who swim in Melbourne’s Aquaporko team don’t compete. They are completely self-taught. They perform in watershows wearing floral caps in a pool shared with families at open swim. Their routines would not pass muster at a competition – I’m pretty sure I saw some feet on the ground, which is grounds for disqualificiation under FINA rules. This film would have pissed me off as a thirteen-year-old synchro fanatic. Thirty-year-old me recognizes that that’s not the damn point.

In the film, the women talk about what the team means to them. They say it helped them gain acceptance of their bodies. They say it helped them regain their feminity. One woman even said that after participating in Aquaporko, she went swimming at the beach for the first time since she was a kid. But one thread that kept coming up was that while these women joined Aquaporko to find a group of like-minded people to swim with, they stayed because they loved being surrounded by strong women who loved them unconditionally.

I know what it means to be outcast, but for different reasons. My middle school classmates treated me like sub-human garbage for living my little androgynous life, for being more interested in science fiction and playing the flute and synchro than boys and Seventeen Magazine. These women are treated similarly simply for the fact that their bodies are so far outside the (nearly impossible) standards that our society deems acceptable.

For all of us, synchro provided a place where everything falls away except for what our bodies can do. Where you can find acceptance and sisterly love in a float pattern, arms linked around legs, eight bodies become beauty. These women tell the camera that synchro changed their lives, and I believe them because it saved mine.

Aquaporko! was a lovely film. The joy that these women had swimming together was infectious. My face hurt by the end of the film because I had been smiling for the whole half hour. I wasn’t the only one who felt that way, either – Aquaporko! won the Mardi Gras Film Festival Audience Award for Best Documentary.

If you want, you can buy an Aquaporko t-shirt (sizes start at XL!) from the film’s Pozible campaign. And if you’re a queer fat femme living in Sydney or Melbourne, there’s an Aquaporko team near you.

Aquaporko! is having an encore showing of their film at the Red Rattler on Sydney on 10 March. It is also showing at the Melbourne Queer Film Festival on 18 March. So if you’re in Sydney or Melbourne, or if and when Aquaporko! comes to a film festival near you, I strongly recommend watching it especially if you like watching a bunch of fat women loving themselves and supporting their friends. You should also check out the film’s website for more info!