As part of our No Justice, No Pride programming, our trans subject editor Xoai Pham has curated a four-part series called the Principles of Pride. The series unpacks the foundational values that clear a path forward for the LGBTQ movement, values that would make our ancestors proud. This is the fourth in this series; you can read the first three here.

She’s taking time out of her day off work to speak to me about her lifetime of service to marginalized communities. Just yesterday, she had attended an event in support of her friends donning high heels. “I’m so sore! I can’t wear heels all day and be okay like I used to.”

A quiet day was rare for Ceyenne growing up. Much like her experience in jail, Ceyenne’s childhood was regularly defined by those around her. Her parents were not supportive of her gender expression. She was sent to all kinds of psychologists and religious leaders who repeatedly reinforced the message that there was something wrong with her. At one point, she was forced to live with a minister’s family so he could attempt to fix her. “I felt the pressure of their shame… There were no terms for transgender. All of the slurs that could be fed by a parent — I got them all.”

Ceyenne fantasized about suicide regularly as a young person because she felt there was no way out of the hell she was living in. That desperate need to escape led her to run away many times. She lived on the streets, where she’d meet people who became the family she needed.

“I kept running away because I felt safer. I felt at peace. Even though I was homeless and had all the elements against me, I felt safer out there than I did at home,” she remembers.

She experienced homelessness sporadically all throughout her teenage years. Even before she became an adult in the eyes of the law, she had lived through so many of the circumstances and statistics that advocates regularly cite when describing the plight of Black trans women. Ceyenne’s life illustrates the trap that Black trans women are born into — a web of violence from family members, institutions, and government agencies that confines a person into a cycle of neglect and abuse.

After the deaths of Tony McDade, Riah Milton, and Dominique “Rem’mie” Fells, the frustrations had reached a boiling point. A march was organized for Black trans lives in Brooklyn on June 14th, where Ceyenne was a featured speaker.

“For every girl that died, the police should be ashamed of themselves. For every time we had to bury one of ours, they need to be ashamed of themselves,” Ceyenne said to a historic crowd of about 15,000 people. Many have noted that this was the largest turnout they’ve ever seen for Black trans lives. At the march, Ceyenne was able to announce that the organization she founded — GLITS, Inc. — had almost reached their goal of raising one million dollars to buy property to house Black trans women, especially those who were exiting prison and with nowhere to go. She has since met her goal. She signed the papers for a building with twelve units on June 18th.

A million dollars is no small sum, and it all started with a dream that Ceyenne had for Black trans people to be able to take ownership of their lives. She has become the parent that she desperately wanted as a child. She is imagining futures that so many thought impossible. Like so many of the Black and Brown trans women who organized the first rally and march that became what we know as Pride, she is building a world from scratch because she was given nothing. As a hostile government continues to encourage discrimination against trans people, even reinterpreting laws in the latest attempt to sever trans people from their healthcare, Ceyenne is doing what mothers should do: protecting their children from harm.   Ceyenne’s advocacy reminds us precisely why abolition of the police and prisons is not only possible, but absolutely logical. If billions of dollars went into Ceyenne’s dreams rather than police departments, we’d all be much better off.

While many people grow up being taught to view the police as heroes saving neighborhoods from violence, Black trans people and sex workers have long seen the cops as the origin of violence, itself. “Keeping prisons the way they are is the worst thing, but you throw policing into that — the people that bring us to jail? So many times I’ve heard of girls who’ve been molested or raped while being arrested… and nobody is doing nothing about it,” Ceyenne reminds us. Earlier this month, a new video was released depicting the moments before Layleen Polanco died of a seizure while in the custody of Rikers Island jail. In those last crucial moments that determined whether she’d live, corrections officers are seen on video laughing among themselves.

As the movement to defund police continues to evolve, we must look to Ceyenne as the answer to where we could be without police and prisons. She makes the criminal justice system obsolete through her work to save her people. She reminds us that trans elders have always been caring for our community without the need for police. She reminds us that we already have within ourselves what we need to protect and care for one another.

As trans people who are so accustomed to losing our chosen family before they become elders, Ceyenne is setting a blueprint for what it means to live fiercely and claim a stake on your life. Because of her advocacy, more of us will be able to grow into the elders that we see in her.

I ask her, “Twenty years from now, how would you like your ideal day to start?”

She smiles immediately and says, “Music.” She chooses “Deliver Me” by Le’Andria Johnson as her morning song: So I’m speaking for all of you listening / Starting here, starting now / The things that hurt you in the past won’t control your future / Starting now, this is a new day. 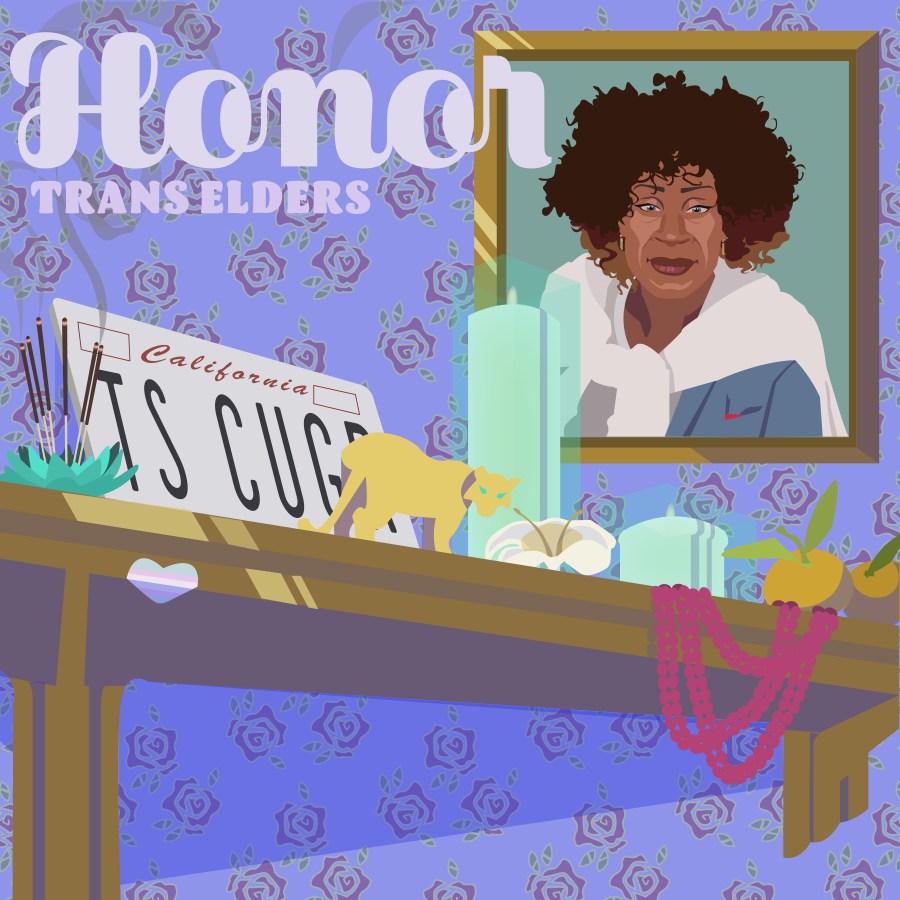