Previously on Pretty Little Liars, Caleb and Spencer completely disregarded Sheriff Toby’s instructions and went rooting around in some random criminal’s storage unit. They found mountains of evidence, a barrel with probably a dead body inside, and one full hazmat suit. They also found out that Sheriff Toby does not like to be crossed! And that Caleb still fits just fine inside some air ducts! And that the storage unit was rented in Hanna Marin’s name! Emily and Talia continued their awkward lesbian mating dance, cloaking their lady-lovin’ pheromones in food metaphors and chit-chat about Ezra Fitzgerald’s butt. Hanna found herself in the know about a terrible love triangle between her mother, a man of the Lord, and her formerly dead former best friend’s formerly drug-addled brother. And Aria was waylaid by a receipt for coffee. 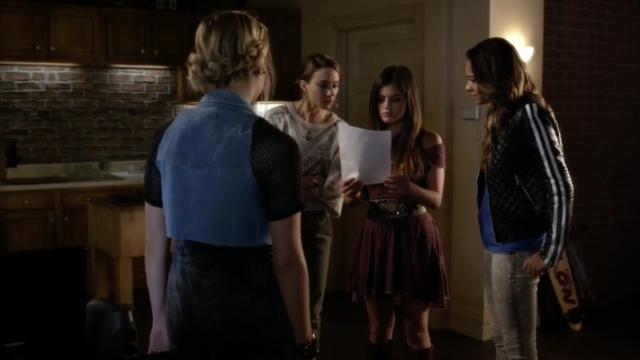 Thank you all for coming to the first official reading of the Sparia Fan Fiction Coven.

BSC HQ. Hanna is mad! Mad, mad, mad! Someone has rented a storage unit in her name and there are bloody clothes and shovels and possibly Mona’s body stuffed into that storage unit, and the Liars want her to just leave it alone! They keep saying “Holbrook this” and “Alison that” and if Hanna tries to move all that evidence, she’s going to get everyone arrested for Mona’s murder. Hanna wisely points out that if she leaves that shit alone, it is going to be her, by herself, who is arrested for Mona’s murder, so she’s got to do something.

Aria: This is your fault in the first place for visiting Ali in prison and making her angry and now she’s retaliating by framing you.
Spencer: Wait, who the what with you visiting Ali in prison?
Caleb: Spencer, hey. Hey. Remember when we destroyed that knife that time when I almost barbecued my noggin? That was smart, right? How smart are we, Spencer? So smart!
Hanna: Everyone in this room sucks, except for Emily. I’m leaving!

The next morning, at the New Brew, Emily and Aria drink a lot of coffee and talk about how they didn’t sleep very much due to thinking about Mona’s body in that barrel. Y’all know I’m messing with you. That’s why Emily couldn’t sleep. Aria couldn’t sleep because she was dreaming about A plastering her Talmadge essay all over Ezra’s cabin so that when he rode the ski lift home from a long day of selling books, he would find the story she wrote about how this very cabin is the place she discovered her high school English teacher/lover had been stalking her and her teenage friends for a minimum of two years because he was obsessed with writing a True Crime novel about their dead teenage friend. And when he found that essay about how his stalking and manipulating messed up Aria’s whole high school life, his feelings would be hurt. 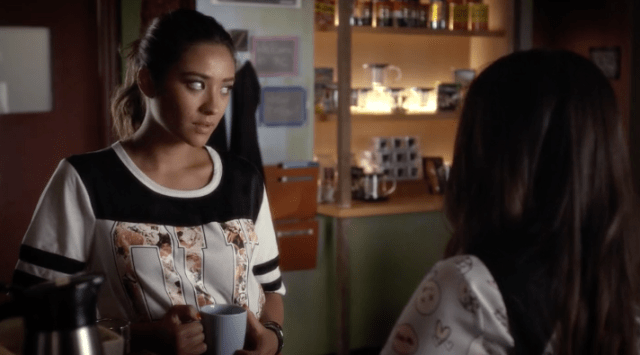 If Emily ever wrapped Aria up in her warm, magical embrace, that girl would come so undone it would take years to put her back together.

Once Aria is gone, Talia wheels out a pastry she made for Ezra because she heard his main thing besides creepin’ is cake. Emily is like, “Your obsession with cooking food for Ezra and staring at his rock-knockers leaves me with the impression that you think he is available when he is decidedly not!” Talia says it really is just a simple dessert that she whipped up in no time because she is an excellent chef and also she’s sorry to have encroached on Emily’s turf. Talia’s face says mostly she is sorry that she misread Emily’s disinterest in Ezra and will therefore not be slumping her lady-lumps. Oh, Talia. Relax. You came at just the right time. The best Emily for casual hookups is the slightly unhinged, heartbroken Emily who can open her own goddamn car door and will choke you with an empanada if you won’t just fucking put it on your mouth and eat it. And that’s the Emily you see before you, amped up, additionally, because the conduit of adrenalized hyperreal energy in Rosewood is no longer with us, and so the air is even more frenzy with folly than usual.

(Also, Talia, how old are you? Please be age-appropriate! You’re making me nervous!) 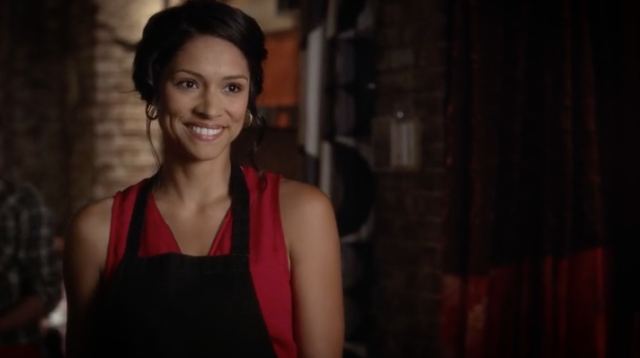 Hanna and Ashley are also having a tense conversation this morning. Hanna wants Ashley to tell Ted about sleeping with Jason but Ashley says that is not a thing she is going to do because she consulted with her wine about it last night and her wine advised her against it. She says the only people who know about the sex-shenanigans are Hanna and Jason, and if anyone else finds out, she’s still got some noodle dollars stashed away and she’ll just bribe them to STFU. She legit says, “If you want to help, forget it!” Which is terrible advice to give your child in any universe, but especially in this one where an omnipresent cyberterrorist is keeping a video record of literally everything everyone ever does.

Down at the precinct, Sheriff Toby is working his way through Alison’s case file. She is 01 years old, according to these records, but what strikes Toby as odd is that Holbrook was there when Ali passed her lie detector test, when Holbrook himself is a known liar who kisses blonde-headed teenage girls on the mouth and does not take care of his sick father even though he’s on a leave of absence to take care of his sick father. 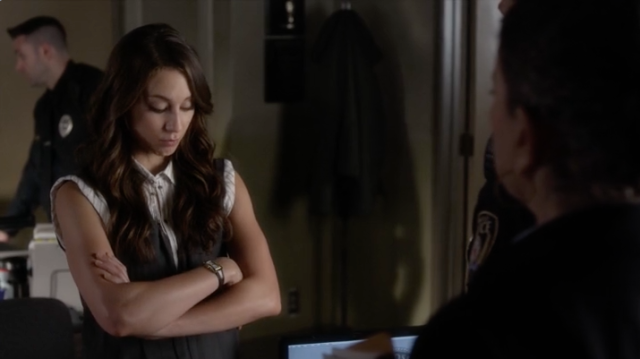 Yes, I think this outfit could be gayer. I could have worn it with one of my hats.

These are revelations he shares with Detective Tanner, but Detective Tanner has no time for his nonsense. First, she shoos Spencer — who shows up to try to reconcile with Toby because she keeps committing crimes behind his back when he has explicitly told her to stop being a criminal — away to school. Then, she tells Toby he has only been a cop for six minutes and unless he wants to leave this thankless, low-paying job that is destroying the most important relationship in his life and go back to the lucrative, low-stress career of being a millionaire teenage woodworker, he better put the brakes on his “little research project.”

Aria cannot take it anymore. She gives Ezra a copy of her Talmadge essay and explains the whole thing about Jackie Molina so he doesn’t get blindsided by his own cash register. I give Aria a lot of shit, but she has figured out one thing the other Liars still cannot wrap their mindgrapes around: The only power A has over the Liars is their own dumb secrets. I mean, well, that and the ability to read minds, be everywhere and nowhere, and bewitch buildings to come to life and attack their occupants. But mostly the lies. Ezra hugs Aria and kisses her head and says it’s a really good piece of writing and there’s no need to feel weird about what he did to her because he doesn’t feel weird about what he did to her, and so no one else should have a problem with it either. 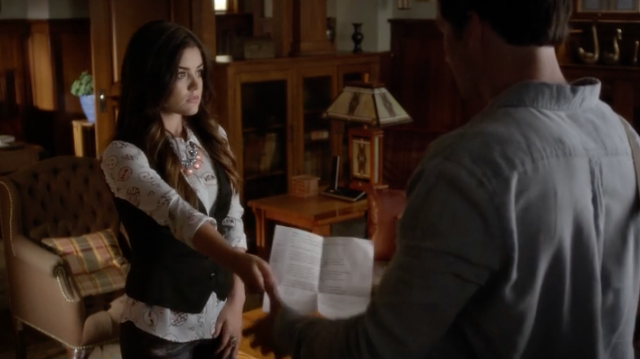 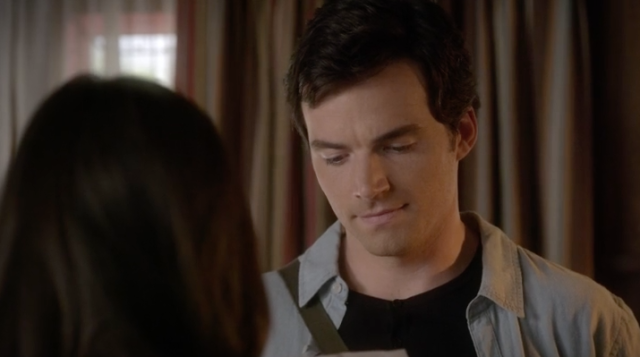 You seem to know an awful lot about scissoring for someone who has never scissored.

When Caleb arrives at Hanna’s house, he finds her stuffing a gym bag with the kind of supplies you use to hide murder weapons and dispose of dead bodies. He has already “corrupted the files” of the storage unit place, so no one’s going to be able to trace it to Hanna, but she goes, “Well, for all I know Ali stuck a piece of my bubblegum to Mona’s shoe and so my DNA is all over her, which means your ‘corrupted files’ are useless.” He scowls at her because he knows “bubblegum” isn’t the reason Hanna’ DNA was all over Mona. But he agrees to help her anyway.