Obviously, they get locked in there and A turns on some liquid nitrogen and Aria starts yelling maybe my favorite thing that has ever come out of her mouth: “SPENCER, WHAT’S HAPPENING?! SPENCER, WHAT DO WE DO?!”

Spencer’s like, “ELSA IS ATTACKING US! WHAT DO YOU THINK IS HAPPENING, ARIA? LIQUID NITROGEN IS FREEZING OUR BRAINS!” 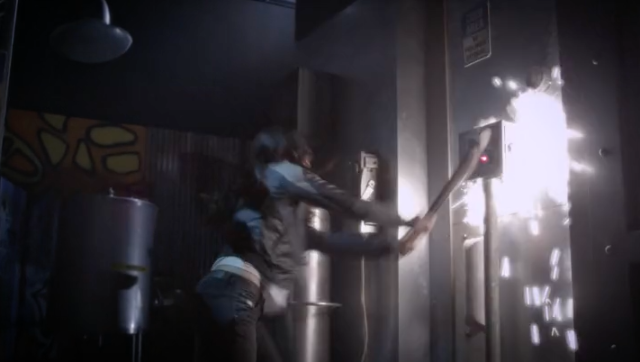 My kingdom for a mannequin leg!

Sadly, they do not have some tongue-wrasslin’ good times like what Ron and Hermione finally did down in the Chamber of Secrets when they thought they were going to die. But happily, Emily Fields is well-versed in the fine art of Smashing Shit to Pieces by her (ex-)girlfriend Paige McCullers, so she picks up this giant pipe wrench and starts wailing on the ice box control panel until it explodes and knocks her unconscious and frees Spencer and Aria. #SaveSparia is the hashtag that appears on the screen and it is the first time I have ever felt affection for ABC Family’s official hashtag maker. (I’ve been holding a grudge for #PoorEzra for a while.)

Rosewood Town Square. Ashley gives Jason a list of headhunters so he can find someone whose skillset includes, like, “crafting first-brand personalities for haunted properties” to replace her. (Also, “headhunter” re: Jason is the best joke this show has made since “CTRL+A.”) Jason tries to French Ashley right out in public, but she politely declines. Then she goes home and drinks a whole bottle of Pinot while trying on that engagement ring and taking it off and trying it on and wondering where Ella is these days. 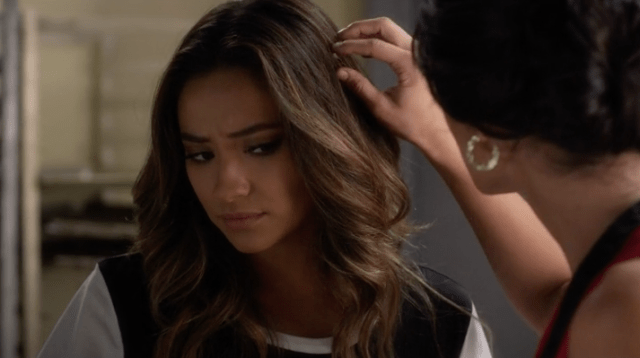 Your hair is so big. 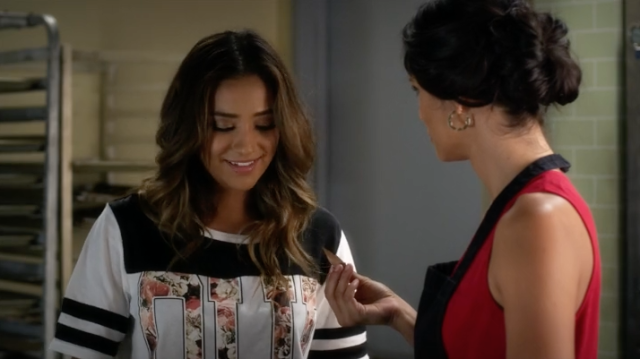 Yeah, I keep my secrets in there.

Emily Fields is the only person on earth who would spend the afternoon saving the lives of two of her friends while trying to track down a third friend to stop her from moving a dead body and still show up to close the coffee shop where she works. (You can take the Canadian out of Canada, but you can’t take the Canada out of a Canadian, I guess.) When Emily walks into the kitchen, Talia tells her to come on in and pull up a chair; it’s just her and her apples in here. Emily looks rough, so Talia’s feelings kicks up a notch and she decides to help boost Emily’s confidence. First, she picks the leaves (??) out of her hair (!!), and then:

Emily: I’ll just go wait in the Lolita section until you’re done.
Talia: Wait, no. C’mere. You had one bad cooking experience. Everyone does. Just stir these apples for a second and I think you’ll be surprised at what happens.
Emily: [Stirs the apples]
The apples: [Burst into flames]
Emily: Nope! That’s exactly what I thought would happen!
Talia: Shit, sorry. I thought these were Red Delicious apples, I didn’t realize I’d used Thunder Blast ones.
Emily: No, for real, I’ll just wait outside.
Talia: I hate to see you leave but I love to watch you go.
Emily: What?
Talia: Nothing.

Up at Capote Cabin, Ezra gives Aria a journal with her initials emblazoned into it and then explains that her essay was actually true and a lot of cool things are going to happen to her in college and he should know because he was in college just ten years ago, becoming obsessed with Alison DiLaurentis, and he doesn’t want to deprive Aria of a life-changing experience like that. She’s like, “We’re not breaking up!” And he’s like, “I think everyone is breaking up this season, to be honest.” 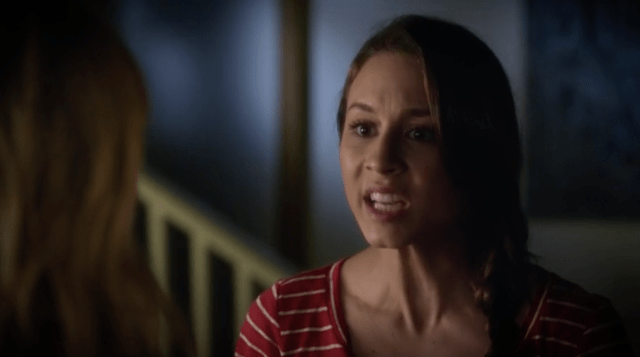 You know how much I love destroying evidence! Why would you go without me? I’ve had a shitty day, Hanna! 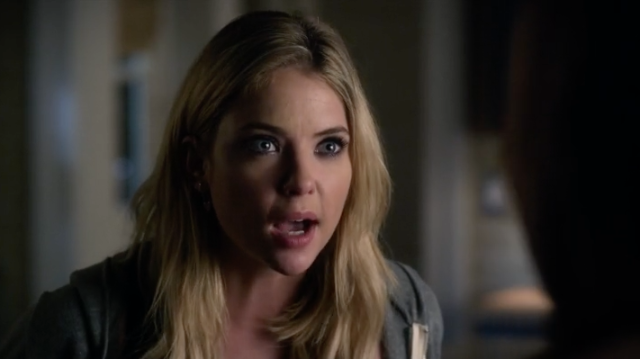 Don’t take it out on me! Aria’s the one who put that Ezria fan fiction on her Tumblr!

Hanna comes to Spencer’s house and they fight about whose side Toby is on anyway. Hanna breaking into that storage unit to save her own self put Toby’s ten-minute career in jeopardy, and Spencer is furious about that. In addition to which, when the Liars go off-book without Spencer’s permission, someone is for sure going to die. Hanna’s eyes get teary and she shakes her head a little bit, all, “Wow. You really do still think this is season one, don’t you?” She pulls her unopened acceptance letters to Yale and UPenn out of her pocket (who has the time to read through acceptance letters to all the Ivys, honestly) and tosses them on Spencer’s kitchen counter before walking out the door.

Spencer seriously has to go lie down on her fainting couch for a minute.

At the precinct, Sheriff Toby ignores a call from Spencer and gets down to the nitty gritty details of being a cop with Detective Tanner. She tells him he took an oath and now is the time to start spilling the Liars’ secrets like the blood they spill all over town!

At New Brew, Talia presents Emily with homemade mashed potatoes and this little fact: The reason she kept feigning interest in Ezra’s buns was to see if Emily also had an interest in Ezra’s buns and if she did not have an interest in Ezra’s buns, Talia could begin her second phase in determining if Emily is, in fact, more interested in beans, and the flicking thereof. Emily thinks that’s a very convoluted way of finding out if someone in Rosewood is gay because everyone in Rosewood is gay. Their conversation is swiftly interrupted by a team of lesbian ninjas descending from the ceiling, black ops-style, to deliver Talia a “Welcome to Rosewood, You Queer Woman of Color” swag bag. In it: body armor, a couple of flair guns, military grade walkie talkies, freeze-dried food, a slingshot, a straight-edged razor, edible do-rags, beef jerky, beeswax, directions to Out of Town, and an inflatable life jacket. 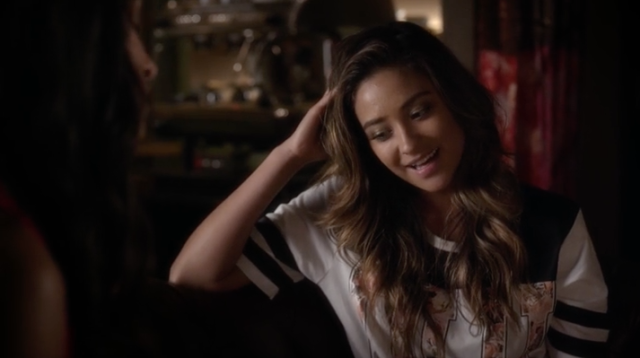 I’m surprised to hear you say you’re into me. 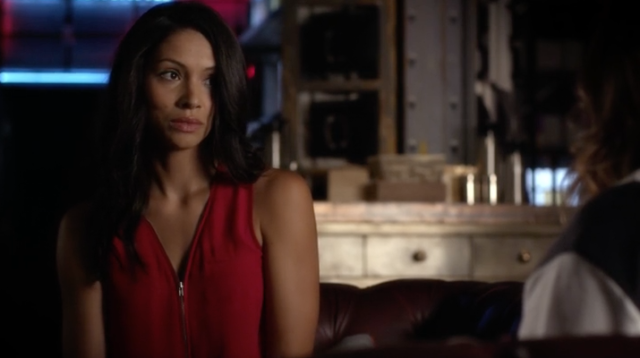 BSC HQ. Hanna rushes to Caleb’s to tell him she’s ready to take the fall for everything that happened with that storage locker, including breaking and entering, murder, and lying to a police officer about having to pee. He says if they go down, they’re going down together, and if they both end up in jail, at least they’ll be content in the knowledge that the neither of them are free. That’s … not romantic, dude. She says, “I’m dangerous!” And he just hugs her, instead of consoling her with that fact that he also is dangerous on account of he is cursed with perpetual death.

Aria goes home and reads the Rosewood High yearbook, the slogan of which is a wonder to behold: THE BEST YEARS OF YOUR LIFE. If I were teenager in Rosewood and I thought that was true, I would lie down in the street and give up. Everyone in the yearbook has extra curriculars under their name except for Aria. Because the only club she joined over the years was the one at Hollis where you torture blind girls with their own pottery. 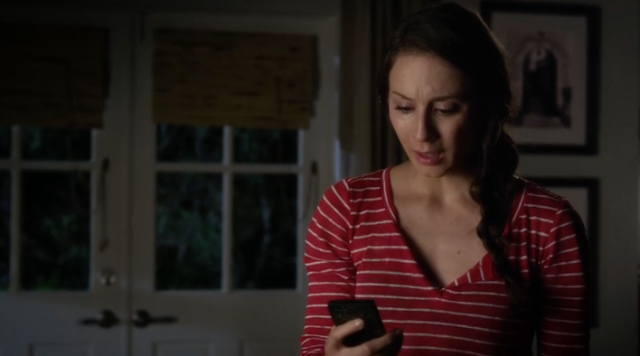 She deleted all the Sparia fic? 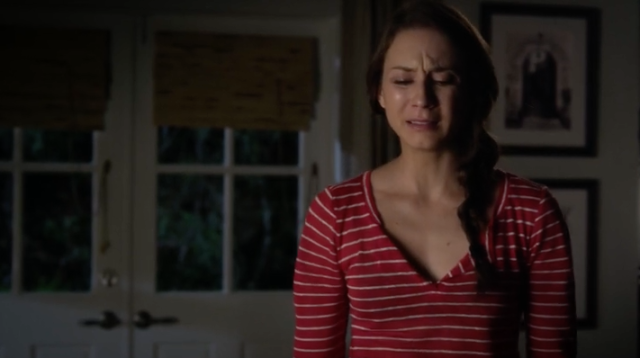 Toby finally calls Spencer and she yells at him for a good long time about just what did he think he was doing going to that storage place without telling Spencer when he knew how worried she was that Hanna was going there to move a dead body. She tells him to come over so she can yell some more, but he’s all, “Oh, I’m drowning in paperwork and have to work late and blah blah blah I’ll call you some time in the future.” And then he gets into the truck Spencer bought him by pawning her own sister’s engagement ring and drives away! TOBY CAVANAUGH! YOU GO BACK TO BEING A CARPENTER THIS INSTANT!

The Risen Mitten skips around Boo’s Boos ice cream factory and squeals with delight when he finds the full handprint of one of the Liars inside the freezing chamber.