For several years, LGBTQ Idahoans and their allies have been fighting to add the words “sexual orientation” and “gender identity” to the Idaho Human Rights Act, which provides protections in the workplace, housing, transportation, education and public accommodations. The classes currently protected under the IHRA include “race, color, religion, sex or national origin.” There are also protections for age and people with disabilities. On Monday, the Idaho House State Affairs Committee heard testimony on why they should bring House Bill 2 (known as HB2) to the full House for a vote. 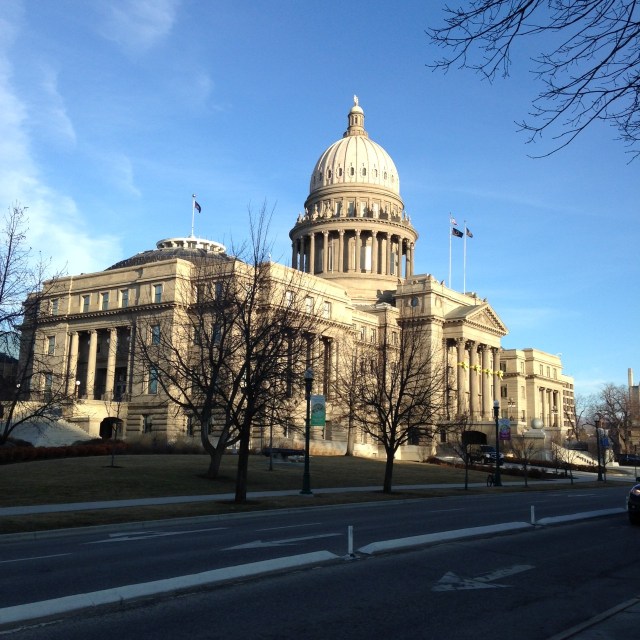 The Capitol Building in Boise on Monday afternoon.

I had a chance to travel to Boise and add my testimony in support of HB2. The hallways were packed well before signups to testify started at 7:30 AM, with people coming from across the state to speak. The energy was palpable, and you could see the excitement on the faces of LGBTQ Idahoans who were finally getting a chance to tell their stories.

I write about LGBTQ issues for a living, but going in front of a committee of House members and a crowd half-full of people who have taken time out of their lives specifically to argue why I don’t deserve human rights is a completely different monster. Bringing my own personal testimony before the committee left my hands shaking and my stomach sitting down in my feet all morning. After hearing claims that there are no cases of trans people facing workplace or housing discrimination, I cited some statistics from The National Center for Transgender Equality and Injustice at Every Turn proving otherwise before going deeper into my personal story.

In a practical sense, this move will have a real impact in making sure that the many LGBTQ Idahoans will be legally assured a fair chance at the same quality of life that other Idahoans have. But it’s more than that, it’s also a symbolic move that will show LGBTQ Idahoans that our state sees us as being equal to everyone else from our state.

It’s hard to not have your humanity recognized by your own home, by your fellow Idahoans. And really, that’s all we want. We’re asking for so little, just the acknowledgement that we are human beings and that we deserve the same basic rights as everyone else.

The knowledge that my state, that my government, refused to protect me, or really, even acknowledge my basic humanity, was one of the things that kept me in the closet for so long. I was so afraid that as soon as I came out I would lose my job and not be able to get a new one, that I would try to find a place to live and be refused, that I would try to live a normal life and I would be denied that I started to lose all hope. Staying in the closet caused me to fall into a deep depression that peaked with me standing in front of my bathroom mirror holding a handful of pills ready to kill myself.

I was lucky, I’m still here and I was able to see a glimmer of hope for a better future for a trans woman like me. Many LGBTQ people don’t see that better future. We can look to examples like the seventeen year old trans girl Leelah Alcorn in Ohio. When she looked around at society and thought about her future, she didn’t see any way that she could be happy or successful. And so she took her own life.

It’s our job to make our world, our country and our state a better place for all the other Leelah Alcorns out there. We need to ensure that people like her, and people like me, and people like all those you see here testifying in favor of adding the words to the Human Rights Act, have a bright and safe future here in Idaho. A future that offers security, opportunities and a fair chance at a good life. We already have so much going against us, we don’t need our own home state to be against us too.

Others arguing in favor of the bill told their own heart-wrenching stories of discrimination, bullying and fear of oppression. Several people talked about family members or friends who had to move out of state or even committed suicide due to the extreme discrimination and bullying they faced for being gay or transgender in Idaho. Many more told personal stories of how they themselves were discriminated against, abandoned by family and friends and ostracized to the point of suicidal thoughts. 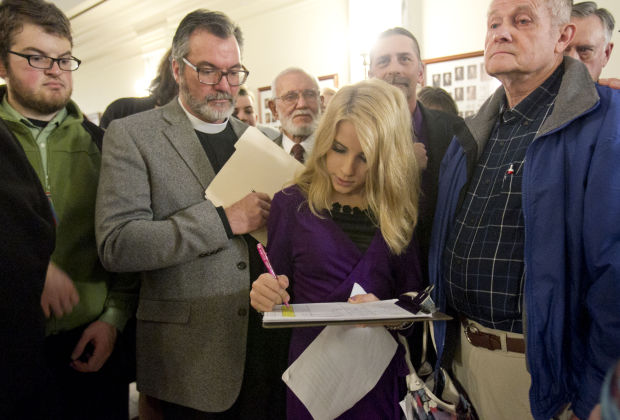 DW Trantham signing up to testify. Photo via Katherine Jones, The Idaho Statesman.

Transgender Idahoans asked to simply be treated like human beings and to be allowed to go to the bathroom in peace, which seemed to be the big concern from opponents. DW Trantham, a 13 year-old trans girl from Boise, said that she and others like her want to live in a state where they are equal “not just in our hearts and minds, but in the laws.” She added, “Imagine if I was your daughter or granddaughter; what sport team would you want me to play on? What clothes should I wear? What bathroom should I use?” After Boise Chief of Police Mike Masterson testified in favor of the bill, Rep. Brent Crane asked him if the bill would allow transgender people to use the bathroom of their gender identity. Masterson simply replied, “They do that now.”

Most opponents of the bill argued that their rights as “Bible-believing Christians” would be infringed upon if they were forced to not discriminate against LGBTQ people. This is in spite of the bill’s exemption for religion and the fact that the Biblical support for LGBTQ discrimination is specious at best. Several people representing lobbying groups including the Family Research Council also came from out of state to offer their testimony, although they seemed to forget where they were and started to argue that these protections should not be added in “Utah” or “Ohio.”

Things really went off the rails in the evening, when opponents of the bill started to show their true colors. Nearly every trans person who was mentioned was misgendered, and both trans and gay people were called “abominations” and “sinners.” The very first person to testify compared LGBTQ people to pedophiles, Nazis and those in Communist Russia. Others said that “we could literally have a gay vs. Christian war” and “500 years ago Christians were burned at the stake for their beliefs, and it looks like that may happen again.” People around me in the crowd had to leave the room or were brought to tears because of the hate and vitriol that was present in the testimony of the anti-HB2 speakers. 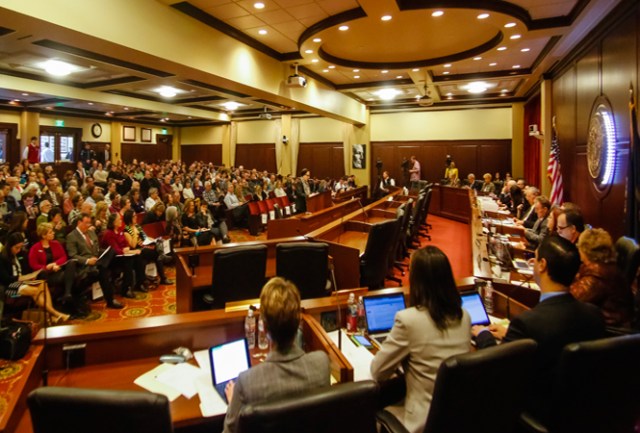 The packed hearing at the Capitol Building. via lgbtqnation

Shortly after several opponents of the bill ranted about how they don’t want “men in the women’s bathroom” with their daughters and wives, Danielle Lundgren, who is a trans woman and a Sheriff’s Detective who works to combat domestic violence and crimes against children, talked about how trans women like herself pose absolutely no threat in bathrooms and as someone whose job it is to protect women and children, she absolutely would not support a bill that placed them in danger. She then asked where opponents of the bill want her to go to the bathroom if she’s not allowed to use the women’s room, or if they just want her to stop going to the bathroom altogether.

Although many of the representatives on the panel seemed like they would rather be somewhere else, a few of them, notably Rep. Paulette Jordan and Rep. John McCrostie were very attentive and asked questions that showed they were both knowledgeable on the subject and passionate about fighting for equal rights in Idaho. It was extremely refreshing to see that even just a few of those elected to represent us care about our rights.

While hearings like this may seem like they ultimately end with nothing getting done, they actually do accomplish a lot. For one, LGBTQ people across the state of Idaho were able to see just how many people support them enough to show up at the Capitol Building at seven in the morning and sit through hours of testimony. The growing number of people who show up in support of the bill also serves as a reminder to state lawmakers that even if they ignore this issue right now, it’s not going away any time soon. The packed hallway and multiple rooms needed to accommodate the overflow of audience members proved that we are here to stay and we are getting stronger. 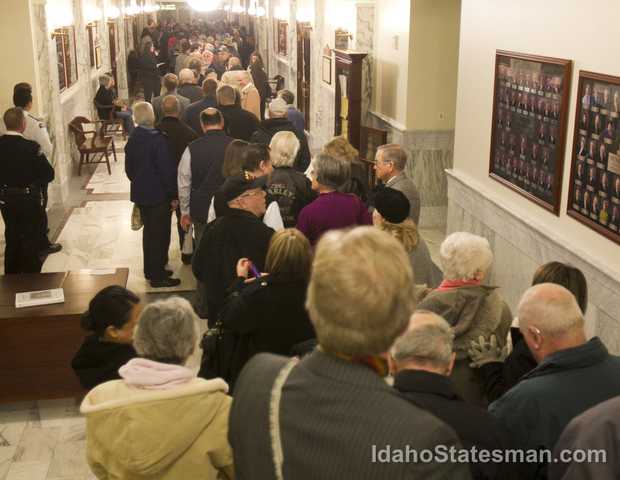 The packed halls before the hearing. Photo via The Idaho Statesman

Testimony started on Monday morning at 8AM and went until 11:30AM. It was picked up again that evening from 5PM until a little after 8PM. Testimony continued the next day and is going to open up again on Wednesday. After public testimony is done, the committee can either kill the bill right now or send it on to the full House for a vote, either with a recommendation or not.