One she’s gone, Caleb fashions a key from a soda can, climbs up into the rafters and through the air ducts — a top-notch #BooRadleyVanCullen shout out; thank you, Bryan Holdman! — and shimmies on down into the locker. Inside, are just bags and bags of evidence, labeled and organized and bloody. There’s this like hazmat suit that Spencer definitely thinks is a live human being, and so she brazenly goes charging head first at it. But mostly there is a barrell and she and Caleb are pretty sure there’s a dead body in there, Breaking Bad-style, and that the dead body belongs to Mona Vanderwaal. 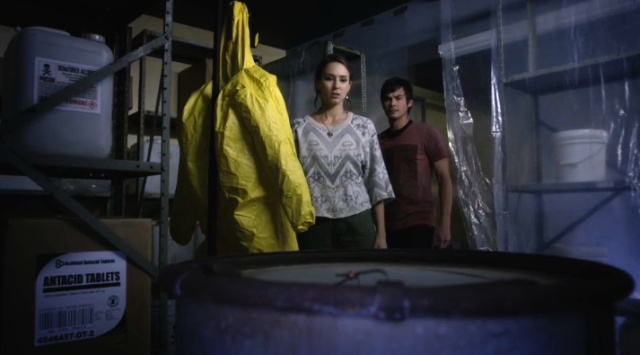 Do you think it could be monkeys? The only thing I’m better at than hide-and-seek is Barrel of Monkeys.

Pastor Ted: I need to ask you something about your mother.
Hanna: Ugh. Yes. The answer is yes. The grossness of the fact of it nearly blinded me like a firecracker right in the retina, but yes.
Pastor Ted: What?
Hanna: What?
Pastor Ted: Are you on the wacky weed, Hanna? Jesus can help.
Hanna: Um, no. What did you want to ask me about my mom?
Pastor Ted: Oh! I want to marry her!
Hanna: She robbed an elderly lady! She killed a fake architect! She blew my formerly dead former best friend’s brother! Just kidding, yes, of course. Marry that woman; I won’t even puke on the dress.

That went well, I think. 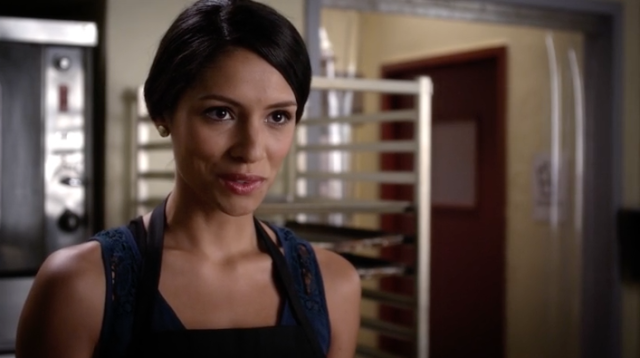 And then I’ll teach you how to make shoelace pasta with actual shoelaces! 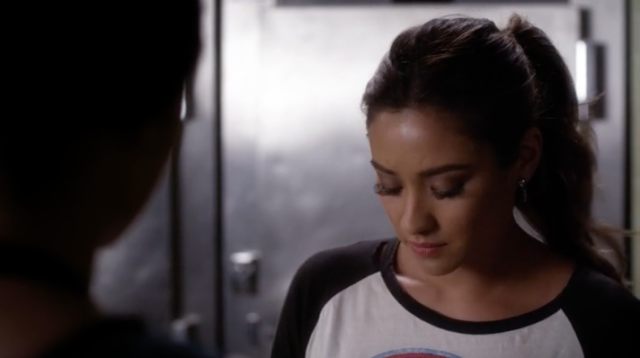 Paige looked so cute in shoes.

Talia has decided to ease up on pulling Emily’s metaphorical pigtails and do food metaphors with her now instead. She’s like, “You’re obviously attached to that shirt because of the naked person who used to be inside it, but have you ever heard of ropa veja, which literally means ‘old clothes soup’ but isn’t as disgusting as that sounds? What you do is put all these ingredients in a pot, right, and each one represents a relationship feeling. Pork which represents the substance of companionship and tomato broth which represent the blanket of comfort. There’s peppers for sexiness, and vinegar for fun, and onions because no one is perfect. So, like, you combine all the ingredients together and it is a delicious stew, but also a potion to cure a broken heart.”

Emily’s eyes are like, “You are one weird lady, but I’m for sure going to rebound with your pretty face.”

Somehow Aria ends up at a florist and gets hoodwinked into delivering some flowers? It’s pretty funny. This lady just comes out of the flower shop yelling at her to shut her mouth and run her buns over to Ashley Marin’s and drop of these roses. When Aria arrives, Hanna shuffles her upstairs because A is the one who sent the flowers, like a fake out from fake Jason thanking Ashley for the intercourse. A’s plan doesn’t work, though, because Hanna takes the flowers and shoos Aria away, and then Pastor Ted breaks open this face-sized peanut butter cookie and there’s an engagement ring inside. It’s like my favorite TV proposal I’ve ever seen. Not the cookie thing, but the next part. Ashley Marin looks right into this preacher’s face, the only man in Pennsylvania who is not a pedophile, and goes, “Naw, man. I want to marry my wine.” 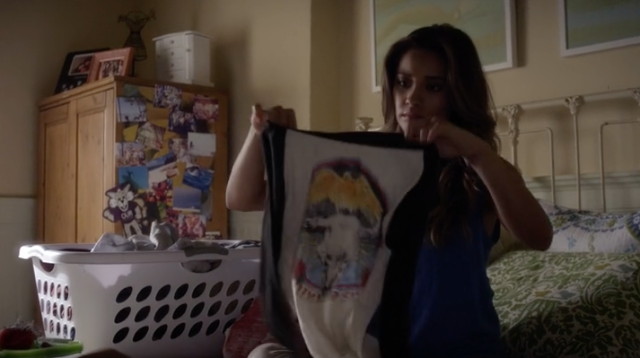 Maybe I’ll sew some puffy drapes and throw them in this package for good measure.

At home, Emily sews up the hole in Paige’s t-shirt and sticks it in the envelope with her goggles and bike parts and probably a letter that is just Tegan and Sara lyrics. I imagine you when I was distant / Non-insistent / I follow suit and laid out on my back / imagine that / A million hours left to think of you / And think of that. And then she goes to Predator to pick up her paycheck. She says she’ll just grab it from the back, but Ezra will not be denied an opportunity to exercise his authority over teenage girls! While he goes to fetch the check and bends over his desk to sign it, Talia wanders up and comments on how great Emily looks when she’s not wearing ratty secondhand clothes. (Talia! You are good at empanadas but terrible at compliments!) She points at Ezra, all, “Dat ass, amirite?” And Emily is like, “… sure?” And that’s how Talia knows Emily is a homosexual and will be putting the groove-moves on her, starting ASAP.

I am happy to have another (presumably) queer woman of color on the TV, and I know she is a woman of color because Pretty Little Liars has been listening to us. And I also know there’s a real fear that if Emily goes too long without a love interest, we’re going to start crying foul. I think these writers care about us an awful lot, you guys. I hope Talia is Emily’s own age or Emily is 18 or whatever is not illegal or predatory! I hope they have such a fling! I hope Emily finds her smile again! And then I hope Paige comes home for prom and it goes just like the fanfiction I have been writing in my own head, but probably it will not because that fanfiction is rated M for Mature. 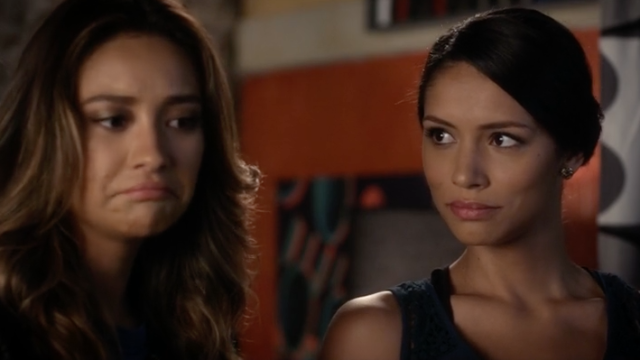 I’d pretend to be trying to get over my ex-girlfriend for a chance to give you a five-second Frencher.

Toby and Caleb go back to his place to freak out about what’s in the barrel, about their fingerprints being all over the barrel, about how neither of them can talk to their boyfriend about the barrel because he is a police officer now. And then Spencer goes home to play Scrabble with that officer. They feel happy to be in love and not under A’s literal gun right this second, until a text comes through on Spencer’s phone from Caleb about the body in the barrel and Toby loses his shit. He’s all, “Why do you keep jeopardizing my career by breaking the law!?” And she’s like, “No! Why are you jeopardizing my entire life’s work by being a police officer?!” Toby storms out.

I wonder if everyone is breaking up this season?

Stupid Johnny comes back to Spencer’s house to get an egg or something for his sewage painting, weaving a hippie thread about skipping college to work on a Platypus milk farm or whatever “real world” thing, and Spencer gobbles his bullshit right up. Ugh! Spencer! STOP IT. You are too good for everyone, but you are especially too good for this clown. 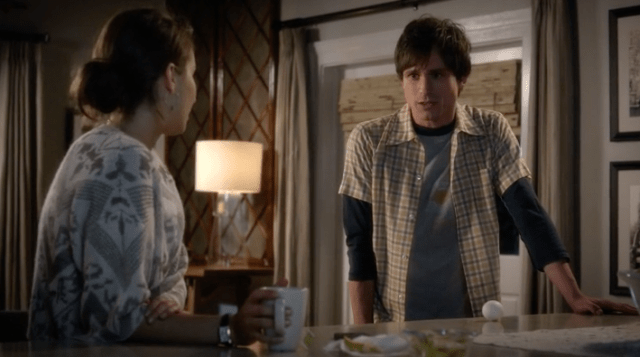 Valedictorian? That’s cool, I guess. I was voted Most Likely to Be the Worst.

Okay and here’s the creepiest thing A has ever done on this show. Caleb rushes to Hanna’s to talk about the storage unit with the evidence and the body in the barrel and check out this shit: The storage unit is rented in Hanna’s name! That is so messed up! It is so perfect! I still have the heebie-jeebies about it two days later.

The Risen Mitten breaks into RPD, hacks into the server using Holbrook’s login, and helps him/herself to a sack of caramel candies. Welcome back, you dastardly gloves! You mischievous gauntlets! 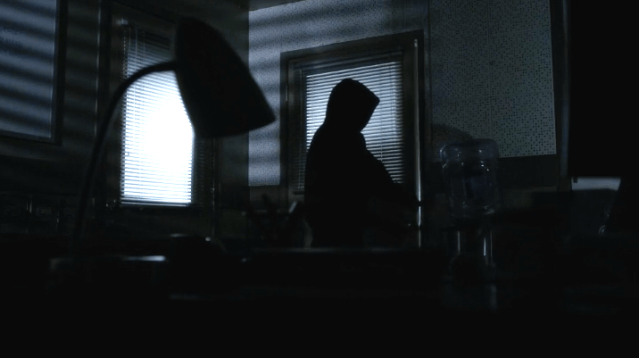 One badrillion thank yous to Nicole (@PLLBigA) for the screencaps. Follow her on the Twitters and learn everything you never knew you wanted to know about Pretty Little Liars!

Next page: #BooRadleyVanCullen tweets are back!