Previously on Pretty Little Liars, Toby went to Build-a-Badge to get himself outfitted as a police man, something no one thought would cause problems in his relationship with Spencer, despite the fact that Spencer is under investigation for at least one felony every minute of her life. Caleb and Spencer decided Officer Toby was harshing their vibe, in terms of being hooligans, so they cut him out of the Scooby gang and baked a bloody knife without him and so there. Emily tried to poison the town with empanadas. And Hanna visited Alison in jail because with Paige gone and Mona dead and Alison behind bars, it’s a dude-heavy world out there and Hanna needs her lady-fix. 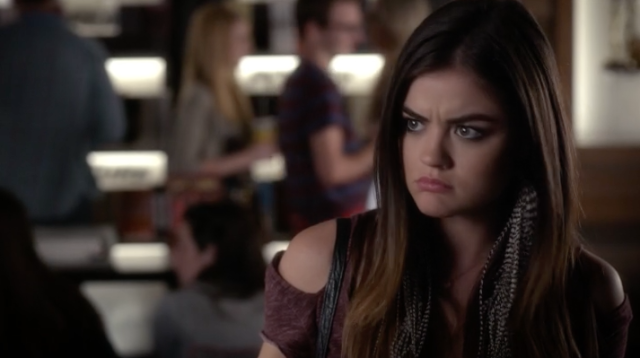 No, what’s Regretsy? I’ve never heard of it.

At Predator Candy Store & Book Shoppe, the Liars debrief last week’s shenanigans, namely that Caleb nearly roasted his brains in a kiln, Hanna found deer guts inside a teddy bear instead of Holbrook, and Aria got into college by telling the truth about Ezra even though she still thinks she was telling a lie about Ezra. Emily is wearing one of Paige’s old t-shirts and wringing her hands about this envelope she’s going to mail to her with like swim goggles and spare bike parts and her broken bleeding heart. The Liars offer to take it to the post office for her, but Emily says she needs to do it herself so she can let Paige go, since Paige asked for space and so now Emily isn’t even going to California for spring break.

The Liars make the strangled, awful, terrifying sounds of a nest full of motherless baby sea otters being attacked by a fire-breathing demon monster from hell’s darkest abyss.

Wait, no. That was me. I was the one making those noises. 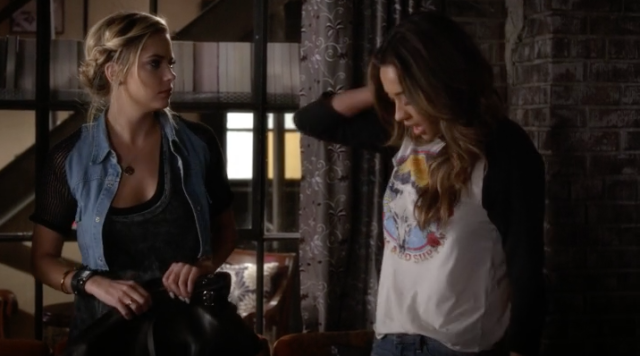 This old thing? Gosh, I don’t know where it came from. I don’t have any idea who ripped a hole in the neck of it while trying to take it off her girlfriend during a frantic, fifteen-minute quickie while someone’s mom was at the grocery story buying popover ingredients.

Hanna’s like, “Can I borrow that baseball shirt?” And Emily slaps her in the face. Everyone besides Emily is dressed so crazy today! Hanna is wearing a sleeveless denim vest onto which she has crocheted little black scarf-sleeves for her shoulders. Aria is wearing those season one pheasant feather earrings that we never could figure out if they were attached to her ear lobes or like woven into her hair. I remember Googling about it back in 2010 and one of Google’s auto-suggestions was “aria feather hair extensions.” Spencer is wearing this blocky poncho sweater with an 8-bit video game background stitched onto it. Actually, my girlfriend would really love that sweater. I’m going to lay off the sweater.

Aria orders a coffee and instead of a receipt with dollars and cents printed on it, what she gets is a receipt with some of A’s very best nonsense printed on it. It’s her entire Talmadge essay, in cash register type. Superior A troll move. It doesn’t even make sense. I love it so much. There’s an extra note at the bottom about how lying stays on your permanent record, which is a pretty dumb threat: everyone knows if you want to wipe out your permanent record, you just print it out and throw it in the creek, or shred it in the garbage disposal, or bury it in the yard at a frat party. 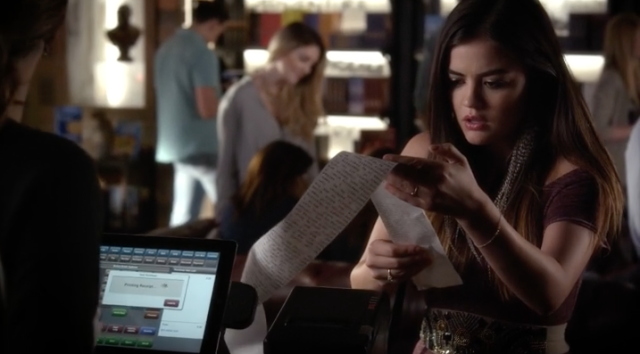 I got a little carried away in Michael’s, okay? Jewelry doesn’t make itself, Emily.

Hanna comes home to find her mother making smoochy faces on Pastor Ted’s cheek. Hanna is scared to walk into the kitchen, though, because she knows Jason was getting smoochy faces on his pecker last night and that’s just not a thing she needs to see. Her relief is three-fold when she summons the courage to follow the giggles: It is a man of the Lord in her kitchen, there are no peckers in sight, but there are waffles. She tries to whisper-grill her mom about Jason getting dressed while walking down the stairs just ten hours ago, and Ashley goes, “I pretended not to know Caleb was living in the walls for half a season; you can pretend you didn’t see what you saw last night.” Hanna thinks that is a thing she can do. (Spoiler alert: She cannot.)

At Predator, bossy Talia has some bossy feelings about how to make coffee which she bossily bosses at Emily. Tallia is, as the saying goes, all up in Emily’s nut; and her interest in Emily’s nut is, very obviously: crackin’ it. What Talia does not know is that if Emily was the kind of girl who was turned on by a beautiful woman getting tyrannical on her about pedantic tasks, she would be pregnant with Spencer Hastings’ baby by now. She would be pregnant with two of Spencer Hastings’ babies by now. She would be living in Maine on a maple syrup farm selling hand-knitted vegan cardigans on Etsy while her and Spencer’s twelve children watched old episodes of Mathnet and Spencer wrote her memoir, Running With Shovels, in the kitchen on a vintage typewriter. 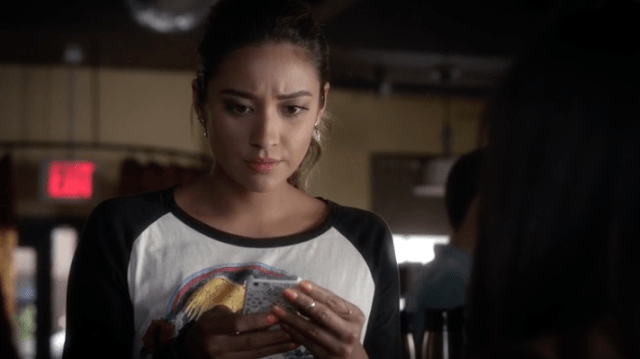