As President Obama’s presidency comes to a close, there’s no question that we’re looking back on eight years of some of the most partisan times in recent political memory. Even though John Boehner is no longer speaker and we didn’t have his pained, resentful expression right behind Obama to remind us of his party’s feelings on the Obama administration, we remember all the infighting, the Herculean efforts of the Republican-controlled House to block any Democratic legislation, the slander against the President (and his citizenship!) by Republican-controlled media. 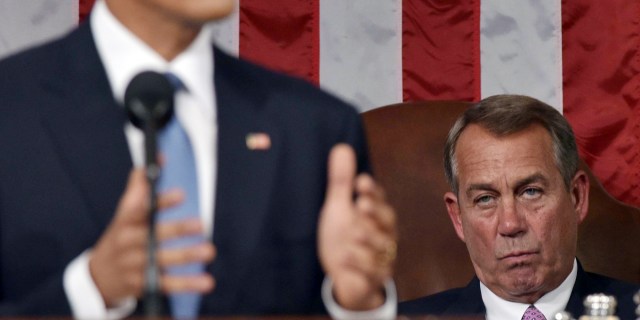 So it’s notable, then — especially in the middle of a heated, mudslinging Presidential nomination race — that President Obama’s last State of the Union address had so much to say about bipartisanship, about working together. Digs at Republican failures were passed up for nods to bipartisan efforts that had succeeded and even some that haven’t, like No Child Left Behind (which was recently replaced with Every Student Succeeds legislation). Sincere-seeming (probably?) references to working with Republicans were made: “I also know Speaker Ryan has talked about his interest in tackling poverty. America is about giving everybody willing to work a hand up, and I’d welcome a serious discussion about strategies we can all support, like expanding tax cuts for low-income workers without kids.”

What’s also notable, though, is at the same time that Obama was promoting cooperation and unity in one of the most divided times in our history, he was also doubling down on the issues themselves. With only one year left in office and a lot of elected representatives working against him, there’s likely a limit to what he can accomplish in his remaining time as President. But not only did he reiterate his commitment to plans outlined in previous SOTUSes, like two years of free community college and new medical technology to combat cancer, he also talked about new plans, like cutting college costs and accelerating development of clean energy.

Divisive issues, like climate change and healthcare, were carefully couched in rhetoric based not in party terms, but the language of objectivity. For instance: “Look, if anybody still wants to dispute the science around climate change, have at it. You’ll be pretty lonely, because you’ll be debating our military, most of America’s business leaders, the majority of the American people, almost the entire scientific community, and 200 nations around the world who agree it’s a problem and intend to solve it.” And: “Let me start with the economy, and a basic fact: the United States of America, right now, has the strongest, most durable economy in the world.” The idea, it seems, is to offer a kind of out: if supporting clean energy or healthcare can be extricated from loaded political narratives, could the Americans who consistently vote against their own interests be persuaded to break the habit? 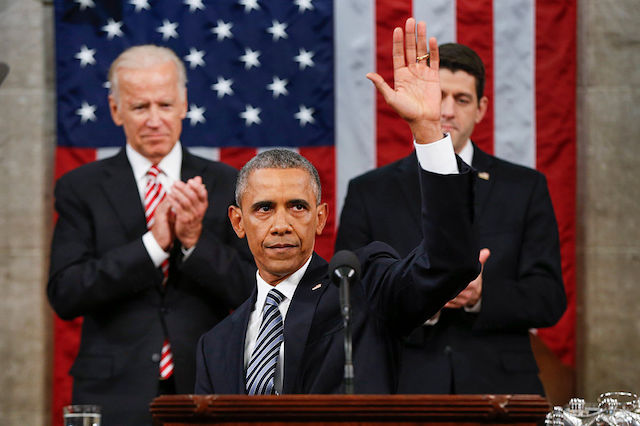 WASHINGTON, DC – JANUARY 12: President Barack Obama waves at the conclusion of his State of the Union address to a joint session of Congress on Capitol Hill January 12, 2016 in Washington, D.C. In his final State of the Union, President Obama reflected on the past seven years in office and spoke on topics including climate change, gun control, immigration and income inequality. (Photo by Evan Vucci – Pool/Getty Images)

Well, probably not; one address from someone that many Americans have already been primed to distrust isn’t likely to break through the sound and fury of decades of media programming from FOX and others. But it does set a possible tone for Democratic candidates to take up. So far, candidates on both sides of the aisle have been somewhat skittish about their platforms, showing a willingness to tweak or even totally revamp positions depending upon what other candidates or voters seem to be thinking that week. With all the confidence of a second-term President who has been Over It for some time now, Obama tacitly offers another option with this address: stick to your guns. (Although maybe not the best turn of phrase, since guns and gun violence merited very, very little mention in this address despite being a much-discussed topic right now.) Offer facts, and trust voters to make their own decisions about them.

As we’ve come to hope for from second-term Obama, the address also contained some solid one-liners that reminded us of why many of us voted for him. He reminded us that “Food Stamp recipients didn’t cause the financial crisis; recklessness on Wall Street did,” and that “It’s sure not the average family watching tonight that avoids paying taxes through offshore accounts.” He also addressed Islamophobic and xenophobic attitudes, although without naming any names:

That’s why we need to reject any politics that targets people because of race or religion… When politicians insult Muslims, when a mosque is vandalized, or a kid bullied, that doesn’t make us safer. That’s not telling it like it is. It’s just wrong. It diminishes us in the eyes of the world. It makes it harder to achieve our goals. And it betrays who we are as a country.

There’s no real reason to be optimistic that the general political climate will become as sober as Obama’s address seemed to suggest it should, or that we will cease hearing paeans to the various aesthetic qualities that potential walls could embody anytime soon. But if this SOTUS is one of the last tangible public offerings of Obama’s term, it will, I think, stand as a pretty good monument to it.