In preparation for the Catholic Church’s 2014 Extraordinary Synod on “The Pastoral Challenges to the Family in the Context of Evangelization,” the Vatican has issued a preparatory document to bishops that has sent eyebrows skyrocketing all around the world. Formally released on Tuesday, the document contains an overview of current Church teaching on the family, as well as broad discussion of some of the unique challenges in today’s society. More unusually, it also includes a 39 question survey with instructions that the bishops share it “immediately as widely as possible to deaneries and parishes so that input from local sources can be received.” Questions delve into numerous hot button issues including same-sex marriage, birth control, polygamy and forms of feminism “hostile to the Church.”

Some of the questions about same-sex couples include:

Though the wording on some of the questions leave much to be desired, the fact that these issues are even up for serious discussion is remarkable. This survey is the latest in a series of indications that the church under Pope Francis may be preparing for serious change. Since his appointment in March 2013, Pope Francis has sent numerous signals that he is ready for a major shift on social issues – at least in dialogue, if not eventually in doctrine. He has repeatedly called for tolerance, specifically stating that gay people should be integrated into society, not marginalized. Last month he wrote a private letter blessing a gay and lesbian Catholic group, and recently, speculation has been mounting that he may be the first pope ever to appoint a woman as cardinal. (On the other hand, the Vatican seems to be working to dispel this rumor, with one Vatican spokesperson announcing “This is just nonsense.”) 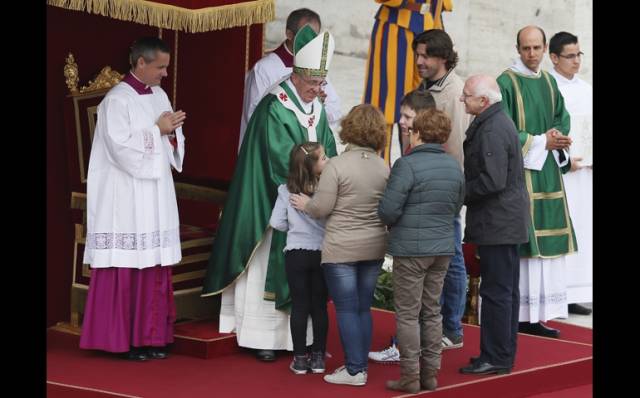 Pope Francis greets a family as they present the offertory gifts during a Mass for families Oct. 27 in St. Peter’s Square at the Vatican. The Mass was the culmination of the Year of Faith pilgrimage of families. (CNS/Paul Haring) via NCR Online.

Within the Catholic Church, the Synod of Bishops is a relatively new tool, created in 1965 as part of the Vatican II reforms in order to “provide a deeper interpretation of divine designs and the constitution of the Catholic Church” and foster unity and cooperation of bishops around the world. Under normal circumstances, these meetings are held every couple years and focus on special regional issues (past examples: “Netherlands,” “America,” “Middle East”) or “ordinary” general themes (“Preserving and Strengthening the Catholic Faith,” “The Formation of Priests in Circumstances of the Present Day”). Occasionally, an “extraordinary general session” of the synod may be called to “deal with matters which require a speedy solution.” To date, there have only been two extraordinary general sessions, one in 1969 and one in 1985.

The 2014 Extraordinary Synod, held October 5-19, will be the first of two extraordinary synod meetings planned under Pope Francis. The first will be attended by a select group of about 100 people, including the presidents of all episcopal conferences. The second, held in 2015, will be much larger, opening up to include experts and Catholic families.  Responses to the preparatory document are to be submitted by the bishops by the end of the 2013 calendar year. 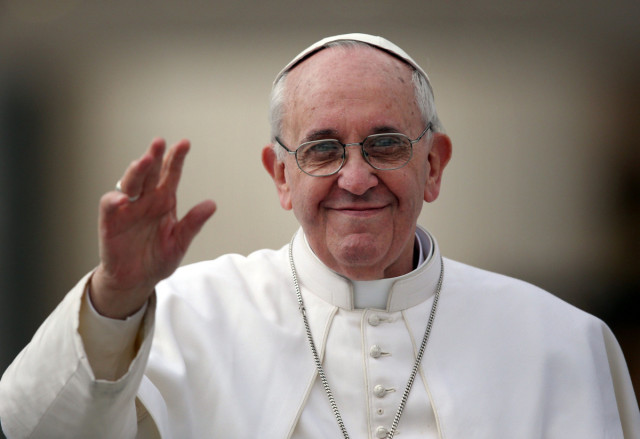 Although the preparatory document went out to bishops on October 30, there seems to be little consensus on how it should be interpreted, or how the questionnaire should be distributed. The Catholic Church in England and Wales has set up an online survey to collect responses, and welcomes Catholics outside of their districts to respond as well. In the United States, no public forum has been set up, and in fact a letter written by the US bishops’ conference’s general secretary Monsignor Ronny Jenkins only asks for bishops to provide their own views, with no mention of even seeking the views of the people in their parishes.

Still, it’s early, and there are two more months for the bishops to prepare their submissions. Preliminary meetings to go over the results are expected to take place in February, and there’s ample opportunity both prior to and after the submission date for the Vatican to issue clarification. Given Pope Francis’ record so far, there seems to be plenty of reason for at least guarded optimism. Keep an eye out.