Pope Francis made history this morning in a news conference with something many Catholics never expected to hear: Gay clergymen should be forgiven and have their sins forgotten. “If someone is gay and he searches for the Lord and has good will, who am I to judge?” Francis remarked in Italian. “We shouldn’t marginalize people for this. They must be integrated into society.”

Since his appointment in March 2013, Pope Francis’ papacy has placed a lot of emphasis on reconnecting with the poor and marginalized groups. Particularly in comparison to predecessor Pope Benedict XVI, he is seen as a more conciliatory and socially progressive leader. Still, his stance on LGBT people has been fairly orthodox — he’s against gay marriage, for example, and he’s really, really against gay adoption — so his remarks today about being nonjudgmental came as a surprise to many. 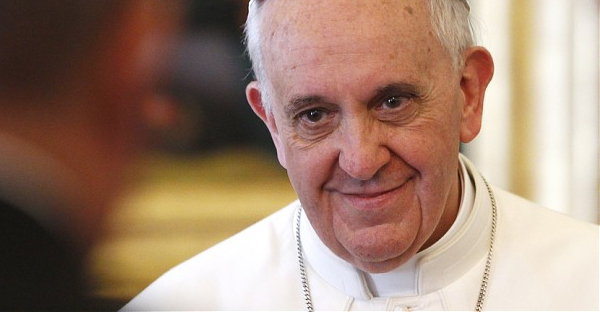 “It’s a real departure from the rhetoric that has been coming from the previous two popes,” said Marianne Duddy-Burke, Executive Director of DignityUSA, in a phone interview. DignityUSA is a group that works for respect and justice for people of all sexual orientations, genders, and gender identities in the Catholic Church. “They tended to talk about us as ‘a threat to civilization’ and ‘doing harm to children’ and ‘effectively disordered.’ People were really surprised, I think, by just being shown a little respect.”

Church doctrine is not determined solely by the Pope, so the statements Pope Francis made today do not necessarily mark a change in doctrine or policy. But as the head of the Church, the position that Pope Francis takes is very influential. Duddy-Burke hopes that the change in tone he’s initiated will be echoed by Catholic bishops and cardinals. “The church as a whole is much more welcoming than it used to be decades ago, but the leadership is way behind and still living in an outdated place,” Duddy-Burke stated. Still, she said, ordinary churchgoers have often been in the lead on rights issues because they know (or are themselves) LGBT people.

Pope Francis’ news conference came at the end of a week-long visit to Brazil for World Youth Day. This year, over 3 million young Catholics took the pilgrimage to Rio de Janeiro to celebrate and reflect on their faith — including points of contention. On the first night, protesters gathered along the papal motorcade route for a same sex kiss-in. While Pope Francis has not issued any direct comments on this, he did make a speech emphasizing the theme: “Go and make disciples of all nations.” This seems poignant when spoken in a country that has seen identification with Catholicism fall from 90% to 65% in the last 40 years; top-down messages of inclusivity can only help the situation.

Whether the Church picks up Pope Francis’ message and runs with it remains to be seen. Regardless, Duddy-Burke expects the road ahead to be a long one. “The reality is that [LGBT] Catholics are in committed relationships, are having intimate sexual relationships, just like everybody else,” said Duddy-Burke. “Those relationships have the same kind of goodness that any other relationship has, and until that is fully recognized by our church, we still have a lot of work to do.”