+ FUCK ME GENTLY WITH A CHAINSAW. TV Land is re-making Heathers, one of the best movies of all time, as a “comedic anthology,” with queer writer/director Leslye Headland at the helm. In the reboot, everything will be hella gay:

TV Land’s take is described as a black comedy that takes place in the present day. It features a new set of popular-yet-evil Heathers — only this time the outcasts have become high school royalty. Heather McNamara (originally played by Lisanne Falk) is a black lesbian; Heather Duke (Shannen Doherty) is a male who identifies as gender-queer whose real name is Heath; and Heather Chandler (Kim Walker) has a body like Martha Dumptruck.

The Hollywood Reporter‘s unnecessary hyphenation of “gender-queer” and utilization of “real name” instead of “birth name” and their tacky employment of “a body like Martha Dumptruck” aside — there is not a thing on this planet I am more stoked for than Heathers who are a black lesbian, a genderqueer person and a fat girl. HELL YEAH FEMINIST HEATHERS.

35-year-old director and playright Leslye Headland (Sleeping With Other People), who has an undercut and is engaged to actress Rebecca Henderson, told THR that she saw the film for the first time in her 20s, and “related with it so much. I can’t believe they got away with so much. The movie was a huge influence on an entire generation and it’ll be nice to introduce this to a new generation.” 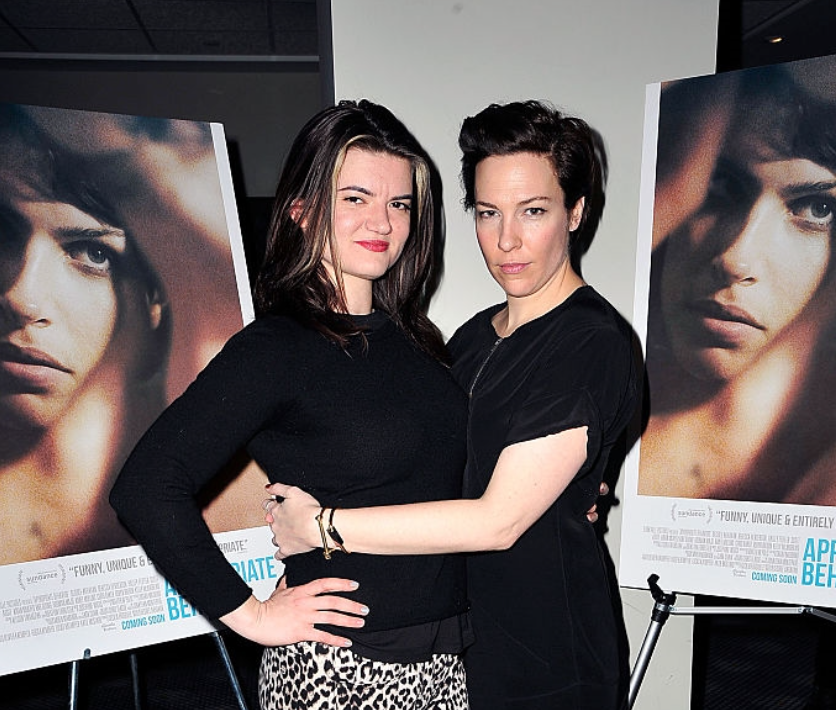 Leslye Headland and Rebecca Henderson at the “Appropriate Behavior” premiere

Headland was tapped earlier this year to direct an untitled Weeks/Mackay lesbian-straight duo comedy for ABC which ultimately did not get picked up by the network. Her play “The Layover” is currently running Off-Broadway — a play sparked by her fascination with Patricia Highsmith’s psychological thrillers. (Highsmith is the lesbian author of “The Price of Salt,” which inspired Carol.)

In a New York Times profile last month, Headland talked a little bit about coming to terms with her sexual orientation:

Ms. Headland wrote the play shortly before she began dating Ms. Henderson, when she still felt “unwilling to be openly — I don’t even know — gay, bi, not straight,” she said. The characters in the play aren’t honest about who they are, because neither was Ms. Headland. “I was so scared for so long to be out, and I don’t know why,” she said. The play emerged in part from a deep unhappiness she felt at the time, a sense of irreparable emptiness.

She also told The Times that “I’m in a wonderful relationship. I can’t wait to get married. I love her. But love is ephemeral, love is fleeting, love is a very terrifying thing.”

Stories Not About Heathers

+ Sarah Paulson is taking Marcia Clark to the Emmys! So if Sarah Paulson wins, they’ll go up there together, and then everybody’s feminist hearts will explode.

+ So many people are gay! It’s just a matter of time before we all gather our machetes and our sexual identities and just set fire to the place, you know? Anyhow, today in “Everyone is Gay”:

+ Ann M Martin, who wrote one of my favorite lesbian protagonists ever, Kristy Thomas, and also Mallory, who is gay, IS ALSO GAY. Read Heather’s article about it here.

+ One of fashion’s up-and-coming-it girls, Selena Forrest, told New York Magazine that she loves girls and only dates girls. If she had to pick a label she would pick bisexual. Read all about that here.

+ Mary & Jane, a new MTV show about best friends named Paige (Jessica Rothe) and Jordan (Scout Durwood) running a weed delivery service, is not about queer stuff. But it’s also not not about queer stuff, as an over-paginated article from AfterEllen disclosed. The two actresses teased sexual tension between the two ladies, with Scout declaring, “We have those moments, but they’re a little more light-hearted. They’re less sincere. Because everybody’s gay. I think guys have this kind of bromance genre now, and that’s fine, now it’s becoming a thing, and it’s great. I think we’re kind of like the femme bromance. So even though it’s not sexual, it’s everything but. Like it’s emotional.” Ummmm… okay???

Vogue had this to say about the program: “At its best it’s got something of the charm of a Pineapple Express mixed with that of a stoner-baiting Taco Bell commercial. At its worst it’s a lifeless, flat buddy comedy.”

+ The creator of Last Tango in Halifax says it was a mistake to kill off their lesbian character Kate (Nina Sosanya) in a car crash, which happened after Kate married her partner, Caroline. “It was a shock. I didn’t realise how attached the audience had become to that relationship and to those two characters,” she said in an interview at the Edinburgh TV Fest. “I found [the criticism] hard and I regretted it. I do think I made a mistake. I wished I had found a better story.”

+ Sia and Maddie Ziegler’s new music video, which features a verse from Kendrick Lamar, is a tribute to Orlando. It’s very intense.

+ Hollywood is bad at trans stories, here are some films you can watch instead. (Also these!)