It is a stone cold fact that pop culture representation of marginalized communities affects the real lives of people in those communities. On a personal level, humans have an intrinsic need to see themselves represented in stories; it’s how we figure out how to move through the world. On a broader level, depictions of marginalized people on TV and in film inform the way our culture views and treats minorities. GLAAD confirms this year after year with the research they put into their Where We Are On TV reports. Support of marriage equality in the United States, for example, rose in almost direct proportion to the number of gay characters on TV, and when GLAAD surveyed Americans who’d changed their minds about same-sex marriage, they found that “knowing” a gay TV character was commensurate to knowing a gay person in real life (and people are much less likely to support anti-gay legislation when they know a gay person).

It’s because of this irrefutable reality that trans women are, once again, being forced to speak out against a major film that will feature a cis man playing a trans women. The film is called Anything and it’s based on Timothy McNeil’s play of the same name. In it, a grieving widower falls in love with a transgender sex worker. That transgender sex worker will be played by Matt Bomer. Mark Ruffalo is the executive producer.

Before we dig into this specific film, let me just throw some numbers at you. According to a months-long deep dive Riese did earlier this year, of the 105 trans women we’ve seen in all of TV history, 59% of them have been subjected to hate speech, 68% of them have been intentionally misgendered, and almost half of them fall into the “deceptive trans person” trope. Prior to 2001, a trans woman had never played a trans woman on TV. Since then, only 20% of fictional trans women on TV have been played by actual trans women, and the most popular and critically acclaimed TV and films about trans women — Transparent, Dallas Buyer’s Club, The Danish Girl — all star cis men in the leading trans role.

Stories don’t happen inside a vacuum, so it’s important to contextualize those bleak numbers with what’s happening in the real world. 2016 has already seen the murder of at least 19 trans people in the United States, which means we’re on track to break last year’s already record-breaking year of reported trans murders. (We wrote more obituaries for murdered trans women last year than recaps for any single TV show we cover.) North Carolina implemented HB2, but it wasn’t an isolated incident. Over 50 anti-trans bills were introduced into state legislatures this year. Many of them were “bathroom bills,” but others tried to halt transition-related healthcare for incarcerated trans people or deny trans people the basic rights to their vital records.

That’s the world Matt Bomer and Mark Ruffalo’s new movie is landing in.

On Twitter earlier this week, Her Story actress and co-writer Jen Richards — who auditioned for a role in Anything — articulated the problems with casting cis men to play trans women. 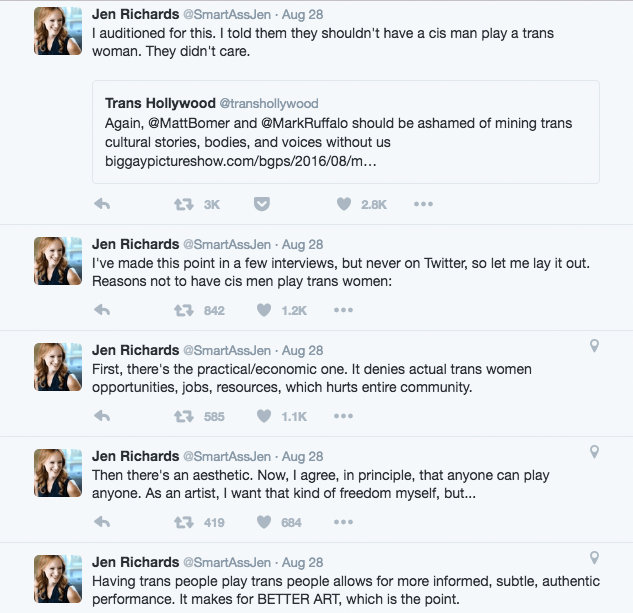 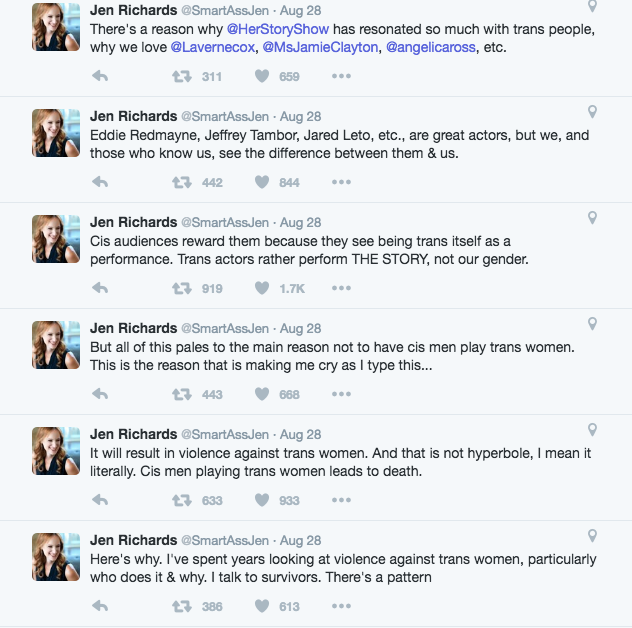 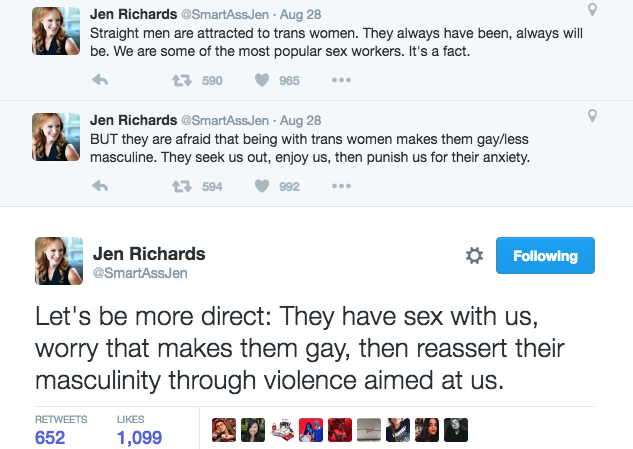 She posted a video — that Laverne Cox retweeted — to unpack the discussion further. In it, she reiterates that it is most often Black and brown trans women, often those who are poor, and often those who sleep with men, who are the most at risk for being murdered.

Both Ruffalo and Bomer seem surprised by the backlash to anything, which feels a little disingenuous given that even the most cursory research would have shown him how troubling it is to the trans community when cis men play trans women. But while Bomer has taken to blocking all dissenters on social media, including very well known trans actors and activists, Ruffalo seems more open to a conversation. At the end of her video and her Twitter statement, Jen Richards asked him to reach out to her.

There are other encouraging things about the response to Anything.

Firstly, the outcry has been pretty universal and plenty of mainstream media outlets have picked up on the story, including The Hollywood Reporter; they published an op-ed from GLAAD’s Nick Adams titled “Matt Bomer and Men Who Play Transgender Women Send a “Toxic and Dangerous” Message.”

But the most encouraging thing of all is that so many trans women can assert their rightful place in this conversation. Jen Richards declaring that she is the co-writer/co-EP/co-star of the Emmy-nominated web series Her Story at the beginning of her video is a huge deal. The bottom line in Hollywood is the bottom line. It’s all about the money. And so the argument goes that you can’t have a trans woman starring in a movie about trans women because there are no trans actresses, or that there are no trans actresses with names that are big enough to get studio funding. Trophies change the conversation. Her Story centers on the experiences of trans women, includes trans women in every step of the production process, and now it is nominated for an Emmy Award. Laverne Cox has also been nominated for an Emmy Award. Critical success isn’t reserved for cis men telling trans women’s stories. Trans actresses do exist and they are talented enough to pull down major award show nominations.

Anything has already been filmed. It will be in theaters. As will Michelle Rodriguez’s film, (Re)Assignment. Hollywood is not running out of ways to make movies than endanger trans women, but it is running out of excuses. The trans women who are being rightly lauded for their acting and writing and directing and producing are making damn sure of that.