Oo-de-lally, oo-de-lally, golly, what a week. In case you missed it, Orange Is the New Black‘s season four trailer is intense as heck and Deadpool‘s Brianna Hildebrand has a girlfriend. Below is the rest of the queer pop culture news you need in your life today.

There’s nothing I love more than a good celebrity profile. (Caity Weaver’s GQ profile of Justin Bieber is hands down the best one I’ve read in 2016.) This week, we’ve got two queer gems: Variety talked to Kristen Stewart (which Stef mentioned in No Filter, but I want to talk about even more) and NoTofu talked to Sarah Paulson (it was “raw and real”).

Here are the top ten things from each profile.

+ She drinks champagne over ice like some kind of Liz Lemon while contemplating her life and the mysteries of the universe.

+ She thinks the Twilight sequels are “a little splattered against the wall.”

+ She doesn’t “fucking know” what Chris Hemsworth was thinking making that Snow White and the Huntsmen origin story.

+ She knows she has a sort of “heavy energy.”

+ “I’m not hiding shit,” she says. “And I’m very obviously …” She leaves the last word of that sentence in ellipses.

+ She wants to be part of the LGBT movement without using the word “gay.”

+ She let the paparazzi follow her with her girlfriends because she wanted kids to see her kissing another girl and feel okay doing it too.

+ She “talks fast, laughs easily, and she thinks about things deeply.”

+ She didn’t mean to out herself, she just really wanted to kiss her girlfriend, Cherry Jones, when she won that Tony Award.

+ She knows one of the reasons you were so happy when she started dating women is because you thought she’d be alone forever with 500 cats.

+ She thinks everyone should be able to love “whomever you fucking well please.”

+ She doesn’t know how Marcia Clark did it either, tbh.

+ Every time she has auditioned for a leading role with brunette hair, they ask her to dye it blonde.

+ She only knew OJ Simpson from the Naked Gun movies(!!!) (before his trial).

+ John Travolta did the dances from Grease and Pulp Fiction for her, on command, on the set of The People vs. OJ Simpson.

+ Are you watching Samantha Bee’s new talkshow, Full Frontal? You should be. It’s very good. This week she dragged Harriet Tubman haters and tackled anti-abortion centers. Emily Nussbaum also wrote a great review of the show in this week’s The New Yorker.

+ Hello, Golden Girls Funko figures are here. (Thanks for the heads up, Nic!) 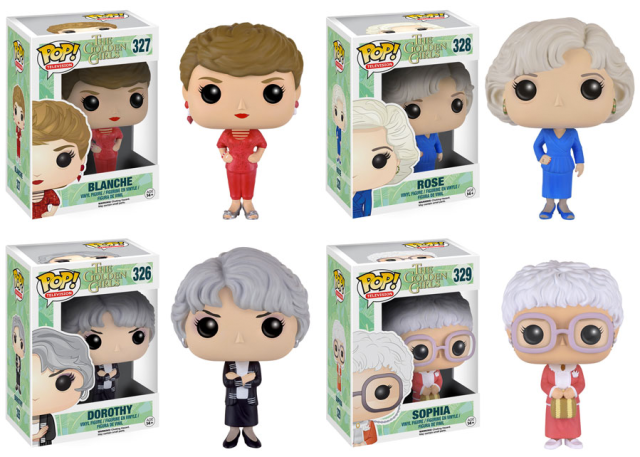 + Scream (and gaymo Audrey) will be back for a second season starting May 30 on MTV. The trailer is finally her. (It’s gross!)

+ What we have here is an adaptation of Sarah Waters’ Fingersmith.