When I was a teen most of the lesbian media I consumed was not lesbian media at all. While closeted cis queers sneakily watched The L Word or Kissing Jessica Stein, I was too afraid of seeming like a pervy dude to view anything so specific. Instead I leaned into cinephilia, scouring the canon for work about women, latching onto anything with hints of queerness.

These films were rarely by women, and even more rarely by queer women. I cherished work by gay men such as George Cukor, Rainer Werner Fassbinder, and Pedro Almodóvar, men who expressed their own shamed femininity through ciphers of great actresses. But unlike these gay male filmmakers, my interest in women went beyond identification. 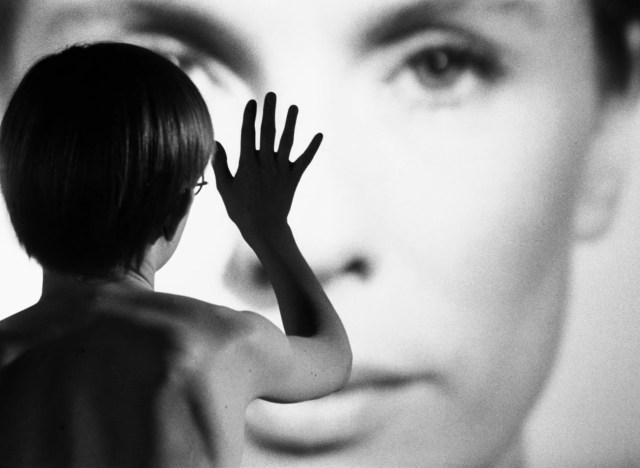 I was what we call an “egg”

Considering this exposure, it’s no surprise who my favorite filmmakers were at age 14, before Criterion released any Chantal Akerman, before I saw Jane Campion’s Bright Star and had my world changed forever. My biggest cinema obsessions were François Truffaut and Ingmar Bergman.

Truffaut’s interest in women was othering (Jules and Jim compares its female lead to an elusive statue), but Ingmar Bergman was different. While ostensibly cis and straight, Bergman felt like a combination of the gay men casting women as themselves, and the straight men casting women as objects of desire. His very first film, Crisis, is a female coming of age story, and another early film, Thirst, not only is from a woman’s point of view, but features a supporting character who is explicitly a lesbian. That came out in 1949!

Bergman notoriously cycled through muses, cycled through girlfriends, his troupe of actors acting as actors and as his dating pool. He was married five times, had nine children, and often had overlap between these relationships and all the others.

Liv Ullmann and Bibi Andersson were two of his greatest muses, two of the greatest actresses in cinema history, probably two of Bergman’s greatest girlfriends, and the leads in his greatest film: Persona. Bergman is present, as writer, as filmmaker, as minor male character, and, most importantly, as the two women. His desire for both of them, his desire to be close to them, to be them, becomes their desire for each other.

This is not a lesbian film. It is merely a film starring two women bursting with sexuality. And when I was 14 it was my favorite film of all time. 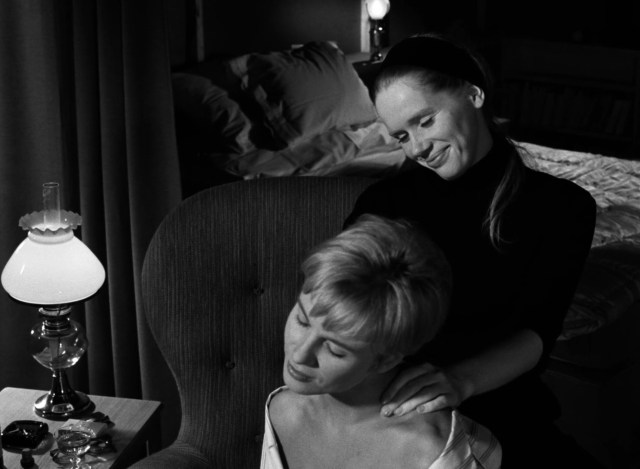 Persona is an odd film. It combines narrative with avant-garde in a way that could be called Lynchian were it not made a year before Lynch first touched a camera. The plot is simple enough. Elisabet Vogler (Ullmann) is a famous actress who mid-performance loses the will to speak. A young nurse, Sister Alma (Andersson), is assigned to be her caretaker, and the two eventually seclude themselves in a beach house. Alma talks, Elisabet listens, the two get closer, and closer, until it all implodes.

But unlike some of Bergman’s other chamber dramas, this is not mere theatre. In fact, the film starts with film: the interior of a projector, spools of celluloid, the opening frames of a reel, and then the most visible penis this side of Euphoria. It’s only a few frames. Blink and you’ll miss it.

Due to the imagery, the repetition of scenes, and the shifting of identities Persona is one of the most written about films in cinema history. Essays have approached the film as a metaphor for creation, a deconstruction of gender roles, a portrayal of global existentialism, and, yes, a lesbian love story. When I was 14 I greedily read all of this, still immature enough to think of art as a puzzle to be solved.

In middle school I spent a large portion of my time on a site called The Auteurs, a now defunct forum adjacent to Criterion, where I formed friendships with anonymous cinephiles and learned more than I ever would in film school. One of the only other members who was around my age, and one of the only members I’m still in touch with, was also a closeted trans girl. We discussed Persona and I remember writing an essay-length post explaining how the narrative reality of the film is that Elisabet is the only person to exist, manifesting Alma like a lesbian Tyler Durden. 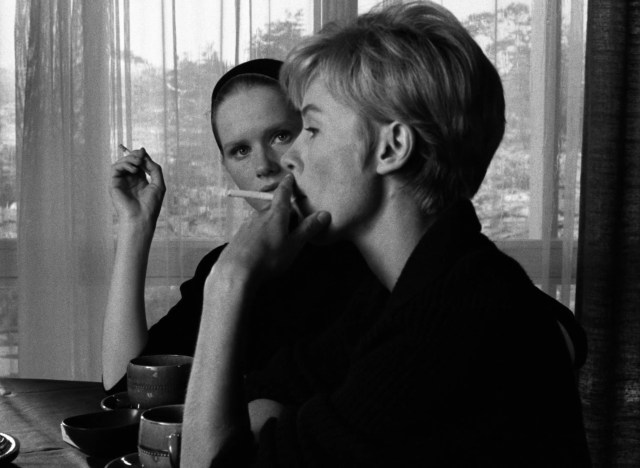 Oh this is why I date smokers

Before they whisk away to a private island, there’s already a tenderness between the two women. Alma sits on Elisabet’s hospital bed discussing art and Elisabet looks up at her lovingly. Then she slides her hand onto Alma’s arm, a gesture between lovers or close friends, not a patient and nurse.

Alma monologues to herself about Elisabet while she applies lotion on her neck and face. She rubs her skin sensually before pronouncing every single syllable like she has honey in her mouth: El-is-a-bet Vog-ler.

At the beach house, Alma tells Elisabet that she believes providing for others gives life meaning. Elisabet caresses her cheek in response. Later, Elisabet gives Alma a massage, her dress hanging off her shoulders, as Alma tells Elisabet no one has ever listened to her before. Not like this, anyway.

The sexuality between the women increases and increases, slowly crossing boundaries, until it culminates in the scene.

Alma is drunk in a chair. Elisabet lounges on her bed smoking. And Alma talks. Alma tells a story. She was on vacation with her fiancé and one day he went into town. She decided to go to the beach alone where she met Katarina, a woman from a neighboring island. They sunbathed side-by-side naked. Two boys approached them and Katarina said to let them look. “Katarina lay there next to me the whole time, with her breasts and thick thighs,” Alma says, visibly getting flustered like she’s back in the memory.

Katarina calls one of the boys over. She removes his jeans and he gets on top of her. Then Alma asks if he’s going to come to her too, and, prompted by Katarina, he does. He falls on top of Alma completely hard. He grabs her breast so much it hurts and then Alma cums almost immediately. She says the way his seed sprayed inside her was unlike anything she’d ever felt. She says she came again and again while Katarina held him from behind. Then Katarina uses the boys hand on herself. “When she came she screamed like a banshee,” Alma laughs as she languidly leans over for a cigarette.

The other boy is shivering in the sunlight. Katarina calls him over and goes down on him. He bends over and kisses her back. Then she gives him her breast. This gets the first boy excited and he and Alma have sex again. Then they go swimming. And part ways.

This story lasts for five minutes of the film’s 83-minute runtime. 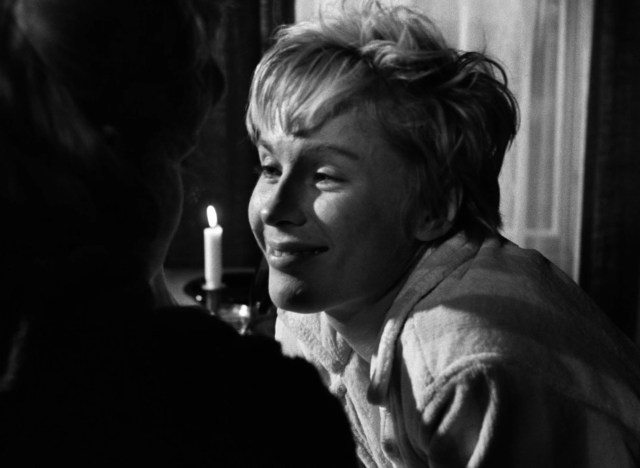 Back in the kitchen, Alma pours more wine, she leans her face dangerously close to Elisabet. As she starts to doze off, Elisabet finally speaks. “Go to bed. Or you’ll fall asleep at the table.” Alma perks up not trusting her drunk ears. Instead she repeats Elisabet’s words as her own. She leans in once again, this time even closer. Elisabet would need only pucker her lips for a kiss. She doesn’t. Alma laughs to herself, like a closeted college girl lusting for her roommate. And she goes to bed.

The two women face the camera. Elisabet pushes back Alma’s bangs. Alma reaches back and lets her fingers slip through Elisabet’s long hair. Elisabet closes her eyes in pleasure. They lean against each other, necks twisted, becoming one. 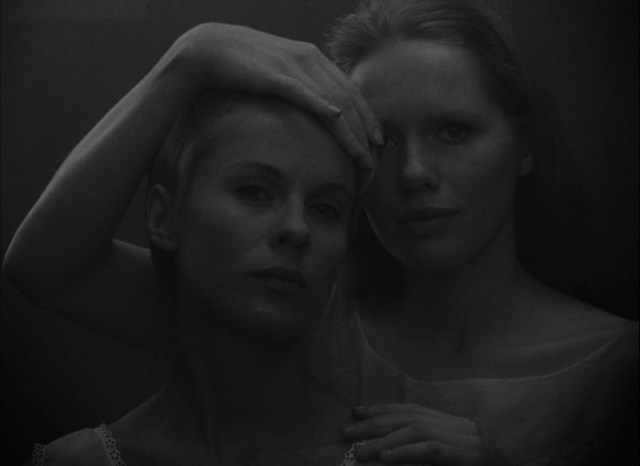 “I think you’d look great with an undercut.”

Andersson died this past April at the age of 83, twelve years after Bergman. Soon after Bergman’s death at a retrospective, Andersson said of the genesis of the film: “He saw our friendship, and he wanted to get… inside of it. Involved.”

This explains the warmth of the first half, the recreation of love between women, platonic and sexual. And it explains the harshness of the second half, Bergman’s tantrum. If he cannot find a way into this relationship, he doesn’t want it to exist. And in a way that came true. Andersson was Bergman’s muse, and girlfriend, for years leading up to Persona. And she and Ullmann were close friends. But while making the film, the dynamic shifted. Soon Ullman would be Bergman’s muse, and girlfriend, his most famous, most successful. And Andersson would become a secondary character in both their lives. 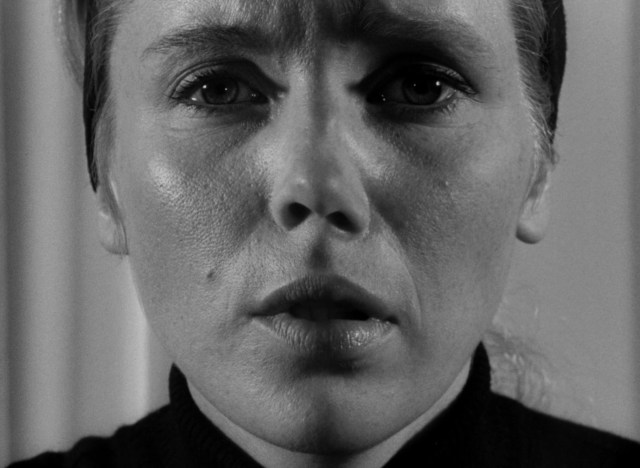 After the film’s opening montage, we appear to be in a morgue. We see close-ups of elderly faces, aged out of gender. And then we see a teenage boy. He comes back from the dead and begins reading A Hero of Our Time by Mikhail Lermontov, famous for depicting the superfluous man, a literary trope that describes someone filled with angst who does not fit into social norms. He puts the book down and places his hand on the camera lens. The angle shifts and we see he’s actually placing his hand on some sort of screen. The screen is filled with an image of Liv Ullmann’s face. Then Bibi Andersson’s face. The boy desires.

If anything Persona is about Bergman’s desire to control the two women, not to be them, or even be with them. It’s about his belief that they’re more or less interchangeable, pawns for his artistic and personal obsession. But when you’re a 14-year-old trans girl it’s very easy to mistake this obsession as your own. The boy who wakes up in the morgue does not grow up to be a controlling man. She gets to instead be the woman of her dreams.

Drew has written 154 articles for us.