It’s no secret that Dear White People has a checkered history with its depiction of queer black women. In both the Netflix comedy series, which premiered its third season on the streaming network earlier this month, and the original film that the series is based on, openly gay director/writer/producer Justin Simien has created a world that is  incredibly smart and stylized. His depiction of being a black college student at a predominantly white university is sometimes too on the nose with its satire, but is ultimately always a fresh and loving tribute to smart ass, political, and pop culturally aware black kids in their early 20s (obviously I can relate). However, black lesbians and queer women have consistently fallen short.

In the first season, ‘90s legend Nia Long guest starred as Professor Neika Hobbs, a lesbian-identified professor of African American history who is engaged to Monique, but is having a secret affair with a male undergraduate student. That sounds awful and gets worse! Though the trend is very slowly turning, it’s still rare to see a black woman in a romantic relationship with another black woman on television. In that sense, Neika and Monique were making history. So was both disappointing and impactful that Neika spent the season hooking up with her male student on-screen without ever showing the romantic relationship between her and her (appropriately aged, NOT A STUDENT) woman fiancée. Yeah, that’s not a great start.

In the show’s second season, the TV series seemingly attempted to correct these early mistakes, this time focusing on two separate lesbian plots that were much smaller, but better executed. In the first of those two plots, Lena Waithe (who also helped to produce the original Dear White People film) guest starred in a parody of VH1’s Love and Hip Hop franchise. In the second plot, a supporting character in the series, Kelsey Phillips, comes out as a lesbian to her roommate Coco. Up until her coming out scene, Kelsey had largely served as Dear White People’s comic relief thanks in part to her Hillary Banks-style valley girl vocal inflection and love for her dog, Sorbet. Her coming out scene is subtle, but it’s certainly no joke and signaled a broader future development for her character.

Now in its third season, Dear White People takes even greater swings at black queer women’s representation – further developing Kelsey into a three-dimensional character that’s independent of her roommate and one-off jokes, while also facilitating the coming out of another established character. Brooke Morgan is a media studies undergrad whose main character traits up to this point have been: being nerdy, being very annoying, being an excellent student journalist, and having lots of random hookups with men. Brooke and Kelsey start regularly crossing paths at the campus coffee house where Brooke works as the manager. Their courtship is a slow burn over the first half of the season. It’s sweet and dorky and by the third or fourth time they were on my laptop screen I was physically drawing little invisible hearts over their faces with my fingers! Squeee!!! Little black nerdy girls in baby gay love!! SO CUTE!!

I loved everything about how unexpected and awkward Brooke and Kelsey were together! I love that Kelsey, who’s been primarily known as being ditzy, rich, and sheltered starts to fall in love with a student who has to work her way through school. I love that Brooke and Kelsey both drive everyone around them absolutely bonkers, but they don’t mind each other’s most irritating traits. I love that because of Kelsey, Brooke starts to come out to herself as sexually fluid (she never gives herself a label) and that because of Brooke, the audience learns new layers about Kelsey that would have otherwise been left as broad, unexplored strokes. During their build up, everything around them just feels pink and bubbly and caffeinated. It’s a welcome romantic reprieve on a show that often leads the one-two punch of its jokes with heavy politics first. 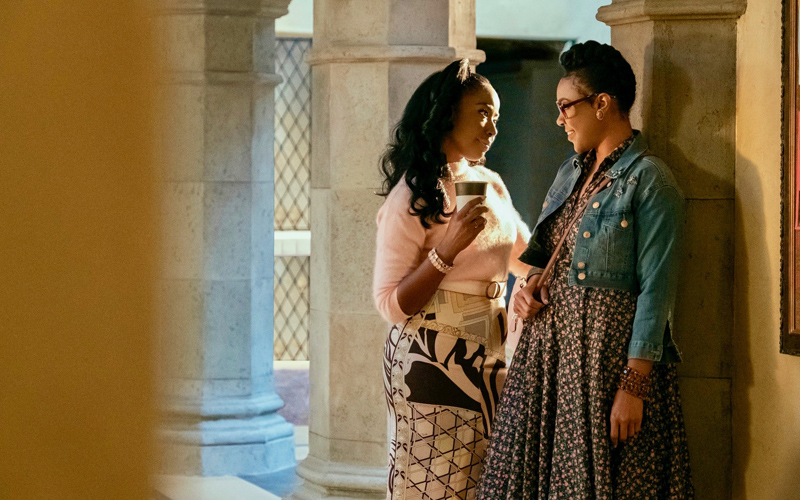 Given Dear White People’ past, I was worried that Brooke’s sexuality was being set up for the worst of biphobic tropes. And Kelsey, who is looking for a longterm romantic relationship, is wary of being a mere college “experimentation” for Brooke, which really didn’t do much to assuage my fears. Without veering too far into spoilers, I will say that the two have surprisingly mature conversation about their specific wants and needs before taking their romantic relationship to the next level. Even though they don’t end the season together, that’s because their relationship helps Brooke grow and realize new truths about her own goals and desires, not because she’s written as some cruel or untrustworthy “evil” bisexual whom lesbians should stay away from. A door is left open for a fourth season friendship (or maybe – if I’m selfishly lucky – a romantic rekindling!) between them. Admittedly it’s a delicate tightrope to walk, but I think Dear White People ends up on the right side of that history.

Dear White People’s greatest strength has always been its willingness to dive into black interiority. By that I mean, Dear White People not only showcases that blackness is not a monolith from the outside looking in, but also within that black diversity, each character has their own unique set of motivations and worldviews. There’s quite literally no other show like it on television right now that’s willing to dig deep into black psyches. Which is why I was delighted that in its third season, the show made a deliberate point out of building out its LGBT characters. Dear White People has always had a strong, fully developed, central gay character in Lionel – the male lead of the original film and an early protagonist for the series. This year Lionel finally makes gay friends and develops a queer crew that includes – D’unte, the flamboyant grad student who becomes his mentor (Griffin Michaels, in the season breakout role. You won’t forget him!); Genifer, a trans woman student played by trans actress Quei Tann; Michael, an HIV+ student who eventually becomes Lionel’s love interest; and our very own darling Kelsey.

There’s a scene where the crew is hanging out together in Lionel’s room as Kelsey is first deciding what to flirt text to Brooke early in their relationship. I had to pause it. It’s a small thing, maybe not even noticeable if you aren’t black, and queer, and used to never seeing yourself on-screen. There were five queer black kids together, just chilling on a bed, limbs in a pile and laughter abundant. FIVE OF THEM. TOGETHER. I had chills. No matter how many times I may have lived it in my own life, I had never actually watched it before displayed in front of me. Not in a major series. Not even once. That moment? It’s a gift of recognition that I’ll cherish.

Laverne Cox also guest stars this year. Her character, Cynthia Fray, is a filmmaker visiting campus and serves as surprisingly fun Ava DuVernay/ Spike Lee hybrid. Cox is gifted as always, but I have found her guest work this year to be incredibly strong – both here and in A Black Lady Sketch Show. Including Cynthia Fray, there are a grand total of seven black LGBT characters on this season of Dear White People. That’s not to be overlooked, it makes this the largest number of any black cast this side of the black gay classic Noah’s Arc, which aired a full thirteen years ago!

On top of everything else mentioned, you can expect to find thoughtful and complicated meditations on the impact of #MeToo in black communities, along with some very funny (even if a little dated already) satire on The Handmaid’s Tale, Elisabeth Moss, Scientology, and white feminism. I’m not sure that Season Three of Dear White People is it’s strongest season, it finds itself lost and meandering for the entire first arc before settling in and ending the season on firm ground. Still, it’s positively its gayest season by a mile – and hey, that’s not nothing!