First a quick note: today is PRIME DAY on Amazon, when there are lots of sales for Prime members. If you shop on Amazon today you should use this link OR if you decide to join Amazon Prime today you should do so via this link so that instead of giving all your money to a corporation, you can give all your money to a corporation and they will give a percentage of it back to us! There you go.

+ This month Marie Claire took their turn offering the world a “revealing” interview with press-wary probs-queer starlet Kristen Stewart. After reading the passage,  “Stewart drops her head, tugs at the hem of her simple black sweatshirt. Fans away a mosquito. Yanks a fallen tube sock from its cotton pool in her Converse sneaker,” our Executive Editor Laneia noted, “i would read an entire post just on these things.” The magazine hits newsstands July 21st and hopefully contains lots of information about Alicia Cargile. HAHAHAHAHA 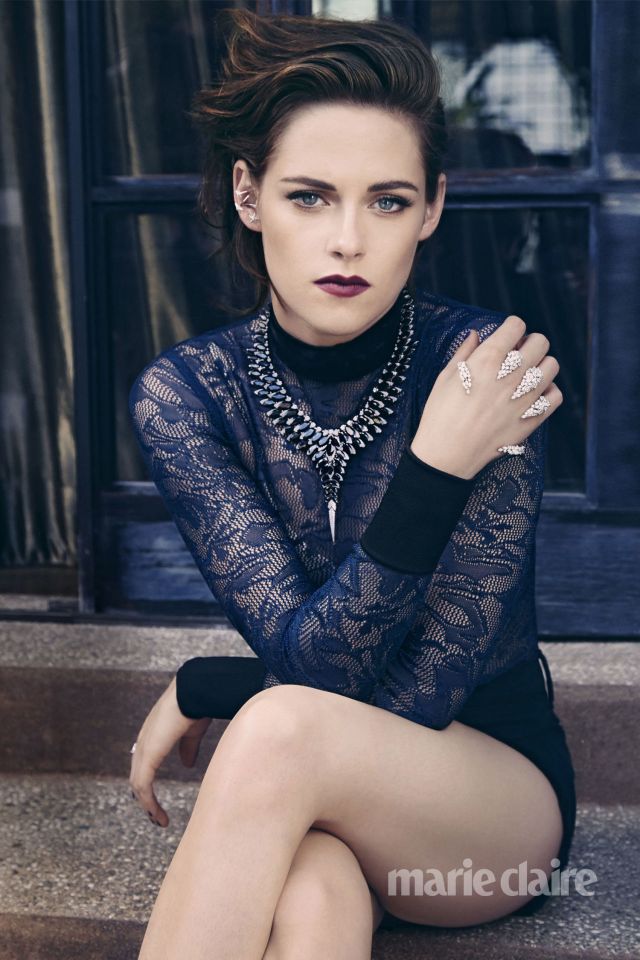 + Laverne Cox has some words about cultural appropriation, following that time that people saw “Watch What Happens Live” and then awful things happened, live, causing Laverne Cox to be roundly criticized throughout the media for not striking back when a rich white cis man called a black teenager a “jackhole.” Kara Brown at Jezebel has one primary feeling about this, which is “Andy Cohen is working my last fucking nerve.”

Andy Cohen, shut the fuck up. You don’t know what the hell you’re talking about. What entire wealth and fame of the Kardashian Klan has been built on emulating black women in a more marketable white body while fetishizing black men. Kylie Jenner’s dumbass cornrows not only looked ridiculous, but continue a pattern of her wearing blackness like a costume.

+ Carrie Brownstein and Corin Tucker give advice to the fine young cannibals of Rookie.

+ Speaking of marriage, Glory Johnson would like $20,000 a month in spousal support.

+ You should be crushing on Brandi Carlile.

+ Remember Anyone But Me? Welp, you’ll be able to see LOST SCENES from your fave lesbian webseries starting September 1st on Hulu and September 15th on YouTube. Rachael Hip-Flores and Nicole Pacent, Autostraddle’s Top Critters of 2009, will be reprising their roles as Vivian and Aster:

In response to the continuing outpouring of requests from our fans and the many newcomers to the show, we brainstormed and came up with an inventive idea to expand the series by writing and producing ten scenes that, although they stand alone, could have been a part of specific episodes over our three seasons. And we’ll tease the audience to watch the entire show again, so they can see where we imagine these new scenes might have appeared but were never placed. We’ll be shooting in L.A. Allison Vanore and PJ Palmer return as Producers.

+ Flavorwire saw “I Am Jazz” and they liked it.

+ What it’s like to be a contestant on Master Chef.

+ Trans actor Tom Phelan, who plays Cole on The Fosters, talked to The Hollywood Reporter about his role and his personal background:

Has seeing portrayals in media made your everyday life any easier given that the subject is less taboo than it used to be?

Yes and no. I think it’s very important for people looking for depictions of themselves in media, but I think as far as real, concrete change, it’s not going to do a lot. To be perfectly honest, I don’t think the most violent trans misogynists are going to be watching The Fosters. We’ve come a long way with being in the public eye, but in terms of lessening violence, there hasn’t been a lot of change. Media representation is great, but it’s not going to promote visible, genuine change. Media representation is for the community and for young trans kids and it’s for people looking to see themselves. I don’t think it’s for the rest of the world. Its primary function is to serve as a looking glass so that people who feel lost and confused can look and see themselves.

+ Anna Pulley would like to know why Orange is the New Black won’t admit bisexuals exist. Also if you are “scary looking,” then you could be on the show.

+ Um, so HBO is doing a six-part mini series by David Simon, creator of The Wire, about a young mayor in 1960s Yonkers tasked with implementing federally mandated integration. Also Winona Ryder is in it. So you’ll want to check that out.

+ Sharon Van Etten wrote a song for Tig Notaro. Also, The New York Times saw Tig and they liked it.

+ The Oscar voting block is getting a wee bit more diverse.

+ Not a Pretty Girl: How Women Are Fighting Pop Culture’s Tyranny of Attractiveness

+ If you would like to watch the trailer for Amy Pohler and Tina Fey’s Christmas movie, Sisters, you absolutely can go ahead and do that immediately! You’re so lucky!

+ Troop Beverly Hills is a deceptively subtle take on glamour

+ All the lessons we learned from “Cluleless” 20 years ago. TWENTY YEARS AGO?!!