Anyone who listens to Dan Savage’s podcast on a regular basis has heard his frequent recommendation to young LGBTQ teens living in small or homophobic towns to flee to a more welcoming community as soon as possible.  The reality that teens have to find a way to survive until they are able to make a get away was of course influential in the decision to make the “It Gets Better” campaign.

Last year, one month after Savage began his campaign and in the wake of several gay teen suicides, Zack Harrington took his own life, as Rachel reported. 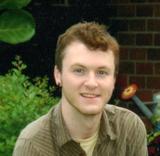 In junior high I lived in Southeastern Oklahoma, and I can attest to witnessing much sexual harassment, racism and homophobia. I haven’t lived in Oklahoma for over a decade, but last year I visited Oklahoma City where my sister currently lives, an hour from Norman.  I visited the town for her graduation from The University of Central Oklahoma, the same college where Harrington completed a semester of college before committing suicide. She has found a community LGBTQ friendly individuals, including several who are openly gay, but bigotry in the culture is still deeply rooted for many.

As Rachel’s article explained, immediately after Harrington’s suicide much fault was placed  on the Norman city council meeting which was held to discuss the possibility of October as gay history month, which took place six days before his suicide.    The Normal Transcript reports:

Some of those who opposed the proclamation claimed that members of the GLBT community would use it to infiltrate the public school system, essentially allowing the “gay lifestyle” to become a part of the curriculum. Others claimed that council recognizing October as GLBT History Month was a waste of their time. Some members of the audience even suggested that any council members voting in favor of the proclamation may have trouble getting reelected. Numerous residents also claimed the Bible was their guiding light, citing the ancient text as their primary reason for opposing the proclamation and the GLBT community in general.

Now there is debate whether Harrington even attended the meeting. Whatever the case,  the lack of community support for LGBT individuals verbalized by so many certainly impacted his final decision. On the anniversary of his son’s suicide Harrington’s father spoke with The Oklahoman about his increased involvement in speaking out for gay rights:

“We are Zack’s voice. He can’t speak for himself anymore, so I’ll speak for him,” he said. “People from all walks of life have contacted us, which really feels good, to be able to relate to someone … to have someone share things with you and feel like you’re helping them through something.” 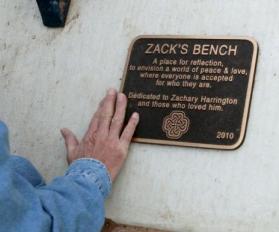 Photo by John Clanton, The Oklahoman

Harrington was fortunate enough to have support from close family members, but what of the lack of support from the community at large?  Reading over a recent council meeting  debating the use of the phrase “In God We Trust” attended by Harrington’s father it’s hard to ignore the power faith-based groups hold in the area.  What responsibility do the faith-based community,council members and teachers hold in assuring a safe space for gay teens?

A year later it’s both comforting and frustrating to read of a family continuing to fight for the rights denied their own son. When will we finally have the world that Zack Harrington needed?