Hege Dalen and Toril Hansen, a married lesbian couple, were having dinner in a camping area on the opposite shore from Utöya Island when they heard the gunfire.

“We heard the awful screaming, we saw young people running in panic into the lake,” Dale told the Helsingin Sanomat. 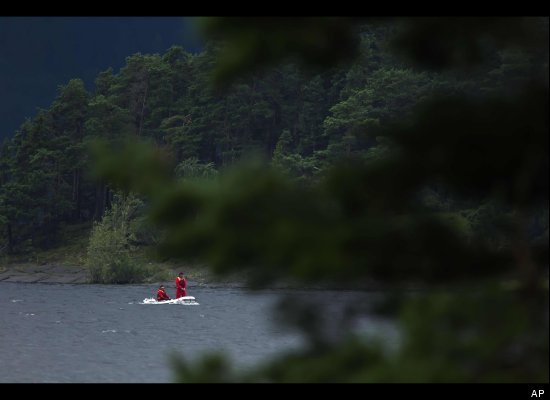 It happened nearly a week ago — July 22nd, 2011 — but for so many people in Norway and all over the world, it still feels like yesterday. 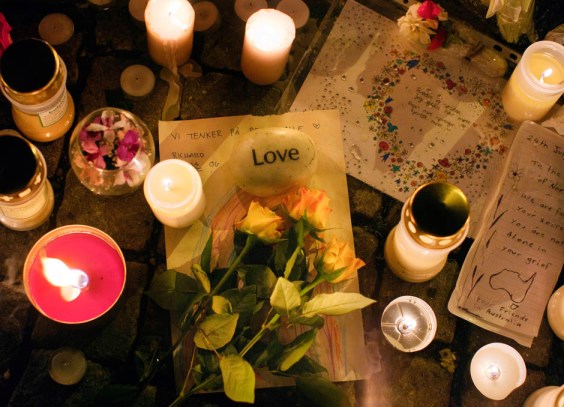 You know the story, or maybe you don’t: two hours before the couple heard the gunfire and the screaming and saw the children running and diving into the lake, a car bomb placed in a Volkswagen Crafter detonated in the parking lot outside Prime Minister Jens Stoltenberg‘s office. This was in Regjeringskvartalet, the executive government quarter of Oslo, where the Ministry of Petroleum and Energy and Ministry of Finance, among other important offices, are located. The explosion started fires in two buildings and the shock wave blew all the windows out, leaving the streets filled with glass and debris and the sky thick with a cloud of white smoke. Eight people were killed and ten were critically injured. 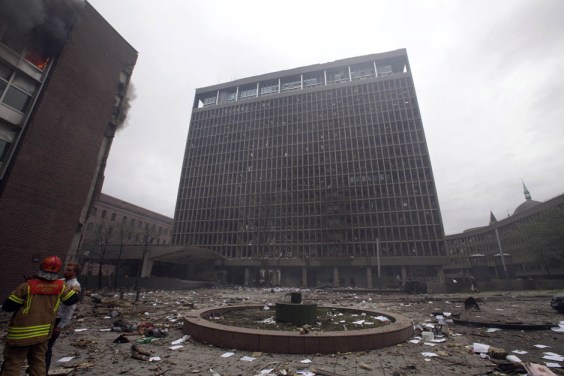 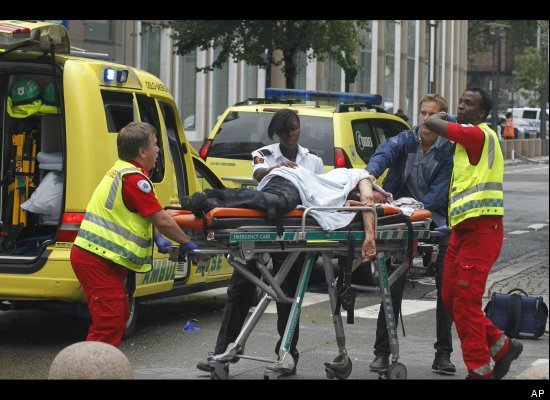 About 90 minutes before the bombing, Anders Behring Breivik, a 32-year-old Norwegian right-wing Islamaphobe extremist who enjoyed World of Warcraft, admired the Tea Party, watched women’s sand volleyball and (as aforementioned) really hated Islam, emailed a 1,500-page document entitled “2083 – A European Declaration of Independence” to 1,003 email addresses. He wrote as “Andrew Berwick,” a name aped from a 12th-century Norweigan king who led one of the Crusades. 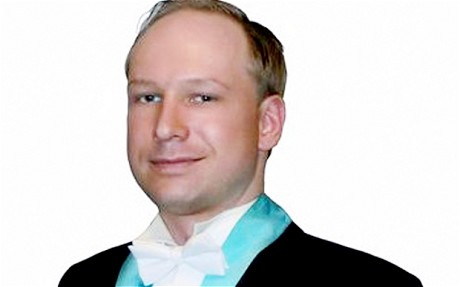 In his manifesto, Breivik claimed to be part of 12-man group “The Knights Templar,” a group which had allegedly been re-founded in London in April 2002 by representatives from eight European countries “for the purpose of serving the interests of the free indigenous peoples of Europe and to fight against the ongoing European Jihad.’” Breivik described meetings (impossible to verify) and claimed that his actions are part of a larger plan for ‘indigenous Europeans’ to take over Western Europe with a successful attack “every five to 12 years.”

“As a Knight you are operating as a jury, judge and executioner on behalf of all free Europeans. There are situations in which cruelty is necessary, and refusing to apply necessary cruelty is a betrayal of the people whom you wish to protect,” he wrote.

He encouraged his followers to “embrace and familiarise yourself with the concept of killing women, even very attractive women.”

Breivik blamed feminism for most of society’s ills, and declared that “ladies should be wives and homemakers, not cops or soldiers, and men should still hold doors open for ladies. Children should not be born out of wedlock. Glorification of homosexuality should be shunned.” 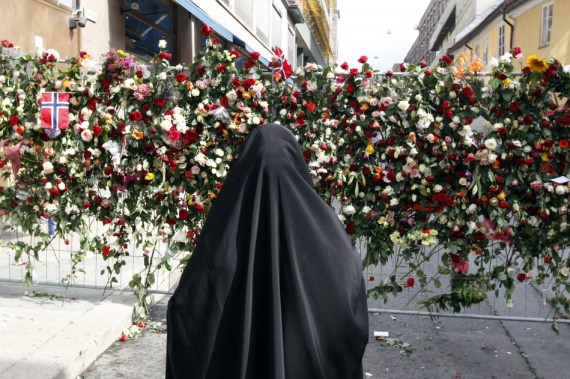 Breivik, who has estranged relationships with his father and stepfather, describes his mother and his stepmother as feminists and is critical of their politics: “I do not approve of the super-liberal, matriarchal upbringing though as it completely lacked discipline and has contributed to feminise me to a certain degree.”

He dedicates a solid chunk of his manifesto to how radical feminism has destroyed society and “paved the way for [his f*cked up totally wrong description of] Islam”:

In the big scheme of things, the truth is that European men have treated women with greater respect than the men of almost any other major civilisation on earth. And I don’t mean just in the modern age, I mean for many centuries. Yet we are the one group of men who are most demonised and attacked, whereas non-white men get treated with much greater respect. What white men see from this is that white Western women prefer men who treat them like crap, and disrespect men who treat them with respect. This isn’t exactly a smart way to behave if you want to be treated with dignity.

The truth is that any nation is always protected from external aggression by the men. The women can play a supporting role in this, but never more than that. For all the talk about “girl power” and “women kicking ass” which you see on movies these days, if the men of your “tribe” are too weak or demoralized to protect you, you will be enslaved and crushed by the men from other “tribes” before you can say “Vagina Monologues”. Which means that if you break down men’s masculinity, their willingness and ability to defend themselves and their families, you destroy the country. That’s exactly what Western women have done for the last forty years. So why are you surprised about the results? As you said, you can’t fool Mother Nature. Well, you have tried to fool her for a long time, and you are now paying the price for this.

He is predictably against gay rights:

Furthermore, it is only because traditional understandings of marriage have already been severely undermined that homosexuals are now laying claim to it. Gays to do not want marriage in the traditional mold (1950 version marriage), only the watered-down version that exists today.

Breivik claims to have avoided long-term relationships with women lest they jeopardize his mission. When he wanted sex, he’d hire a prostitute. How, then, does Breivik suggest his potential recruits explain their reclusive behavior to friends and family?

“Say you think you are gay and are in the process of discovering your new self. Your ego is likely to take a dent unless you are secure in your own heterosexuality, however, it’s an extremely effective strategy for stopping questions.”

Breivik testified: “a couple of [my friends] believe that I have chosen semi-isolation because of some alleged homosexual relationship which they suspect I am trying to hide, LOL.“ 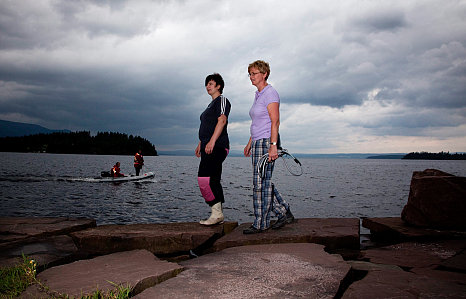 So, then, back to Hege Dalen and Toril Hansen, the lesbian couple who were eating dinner when they heard the gunfire and the “young people” screaming in panic and jumping into the lake.

Dalen and Hansen went outside straight away to their boat, pushing it into Lake Tyrifjorden and, with no knowledge of what was happening on the island and no guarantee that they’d make it there or back alive, drove the boat to where young wounded victims were struggling for their lives in the water. 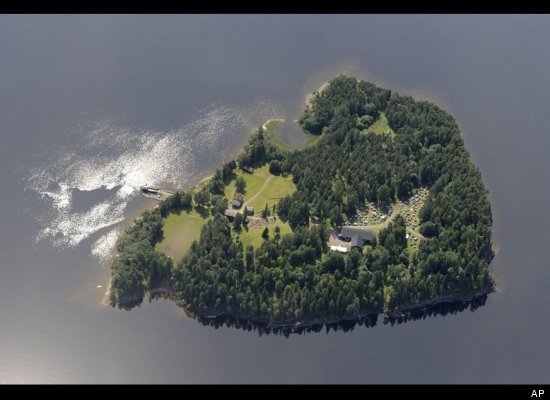 The children were some of the 600 who’d come to Utoya Island for the Norweigan Labour Party’s annual AUF youth summer camp. AUF, founded in 1927 and approximately 10,000 people strong, subscribes to an ideology of social democracy and democratic socialism.

About 90 minutes after the explosion in Oslo, Anders Behring Breivik arrived on Utöya Island. He was wearing a police uniform and he’d come expecting to see and consequently murder former prime minister Gro Harlemn Brundtland but she was gone by the time he arrived. He was running late due to construction at the Oslo Central railway station.

Breivik told the campers he was there for a routine check following the bombing in Oslo and asked people to gather around him, at which point he pulled weapons and ammunition from his bag and began indiscriminately firing weapons. He started out shooting people on the island and then later began shooting at victims who were trying to escape by swimming. 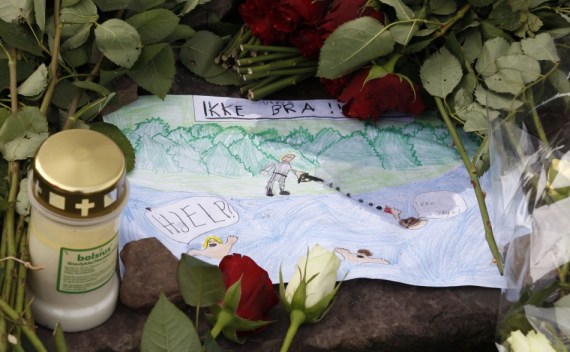 Dalen and Hansen noticed that bullets had hit the right side of the boat they used to rescue 40 young people. It took several trips.

Breivik spent more than an hour shooting kids on the island before Norwegian Special Forces arrived, at which point he surrendered. The Delta Force had traveled by car, didn’t have a helicopter, and were in a boat which broke down during the minute-long trip to the island. Many report that panicked calls from the island were ignored by the emergency operators still dealing with the bombing.

This was an unfortunate convergence of unfortunate situations on behalf of the Norwegian Special Force, described by The Baltimore Sun as “inexcusable bungling made worse by even more bungling.”

Despite some media criticism, the people of Norway “largely appeared to accept that the emergency services faced difficult circumstances in coping with the most deadly attacks on Norway since the second world war.” 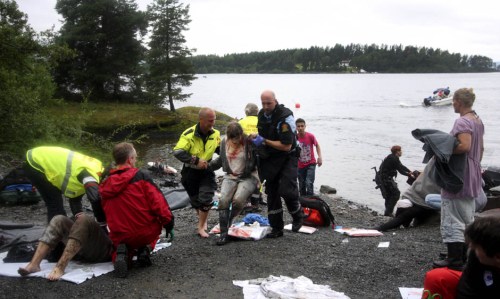 So it was up to people like Hege Dalen and Toril Hansen to save the children as it was happening. It was up to people like Marcel Gleffe, a German tourist who was having coffee with his family at a mainland holiday camp when he heard the gunshots. He immediately piloted his boat to the island where he rescued reportedly 20 people. Other campers got in their boats and rushed out to the island, together saving some 150 people.

“I just did it on instinct,” he said. “You don’t get scared in a situation like that, you just do what it takes. I know the difference between fireworks and gunfire. I knew what it was about, and that it wasn’t just nonsense. Cooperation with the police and rescue crews afterwards was very good, but it all came too late. The first time I was out I was all alone.” 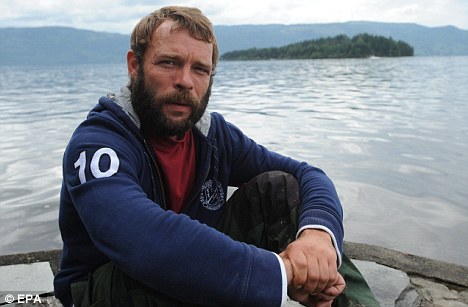 He added: “[The kids] were happy to get help, but they were unsure whom they could trust.”

Gleffe threw life jackets to kids in the water and after four or five trips and 20-30 rescued people, the police asked him to stop. 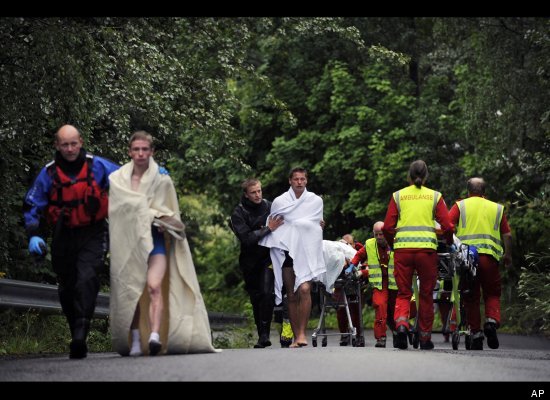 “We did not sleep last night at all,” Hege Dalen told The Helsingin Sanomat the day after the massacre. “Today, we’ve been together and talked about the events.”

And now in talking about the events — the lives cut short, the families broken, the politics derailed, the fucking ridiculously tragic heartbreaking catastrophic horror of it all — we’ll talk about Dalen and Hansen, too. 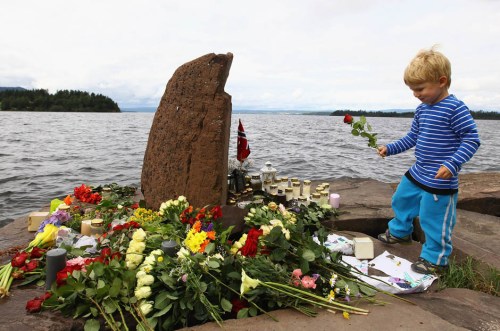 The current death toll is at 76. The number of confirmed dead is at 41 as of two hours ago, with 24 names revealed — 23 killed on Utoya Island and one on the Oslo Bomb blast. 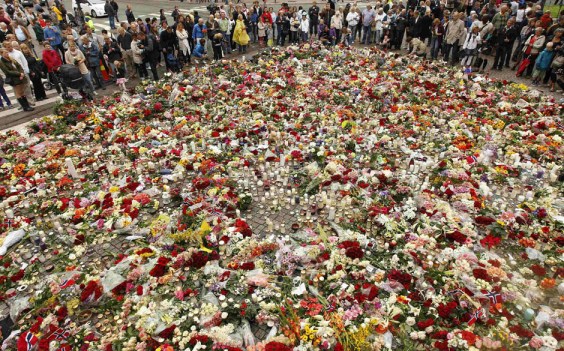 Breivik was wrong about almost every single thought he’s ever had in his insane head over the course of his entire life on this planet, but today, regarding the actions of this lesbian couple who rescued the children, it bears mentioning that the “girl power” he cites as inadequate forces for any society hoping to defend themselves against getting “enslaved and crushed by the men from other ‘tribes'” is precisely the kind of power that rescued at least 40 people from his crushing ammunition. 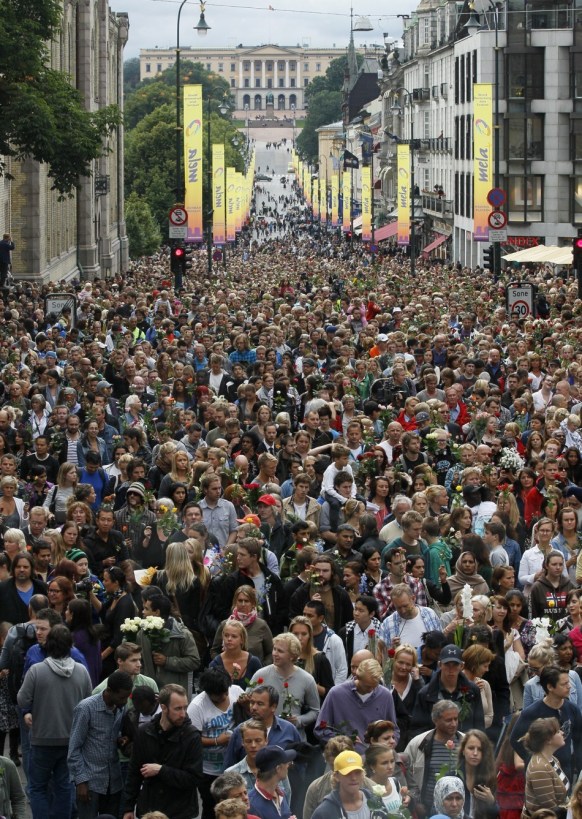 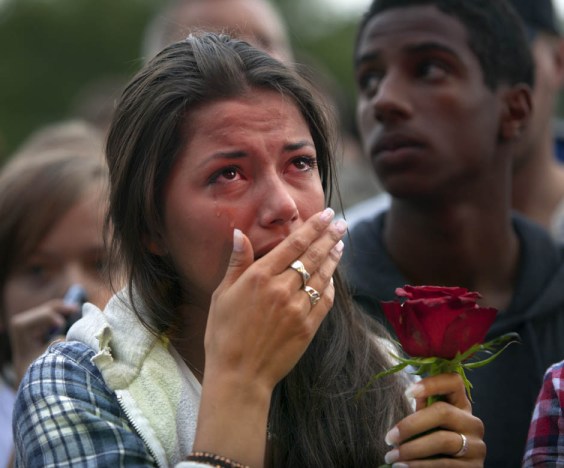 The New York Times is adding photos of identified victims as information comes in from the Norwegian Government.

Before you go! It takes funding to keep this publication by and for queer women and trans people of all genders running every day. And A+ members keep the majority of our site free for everyone. Still, 99.9% of our readers are not members. A+ membership starts at just $4/month. If you're able to, will you join A+ and keep Autostraddle here and working for everyone?
Join A+
Related:Daily Fixinternational newslongreadreally really really bad bad newsriese's pieces

Riese has written 2878 articles for us.