The following piece is a reflection on my experience of the male gaze as someone who is read as a femme white cis girl, and how my increased public visibility compares to when I was presenting as a normative cis boy. It is solely a discussion of my personal experiences, and of course shouldn’t be considered a representation of all trans* people or trans* women. I am fully aware of my “passing privilege” and recognize that trans* women of color and those who don’t “pass” bear the burden of even more unwanted attention, discrimination, and threats of violence when out in public.

It’s a foggy San Francisco morning and I’m late for work again. I hurry out the door and I’m halfway to the BART station when I notice that someone on a bicycle has been following me. I turn around to see a guy in a dirty sweatshirt making the “I’m eating you out” tongue and hand gesture. Ewww. I’m almost tempted to tell this creep that I probably don’t have what’s he’s looking for, but instead I turn and walk faster towards the station. Once on the train, I grab an open seat across from a man in a business suit who smiles politely but then won’t. Stop. Staring. At first I try to ignore him, hoping that he’ll lose interest. When that fails, I try staring back, making sure that he’s aware that I notice.  Still no luck — this only seems to encourage him. I eventually give up and hide behind the pages of the magazine I’m reading for the rest of the ride. When we arrive, I get off the train and head towards my station exit. At this point I barely notice that the eyes of several men I pass by drift in my direction. Welcome to my daily commute. 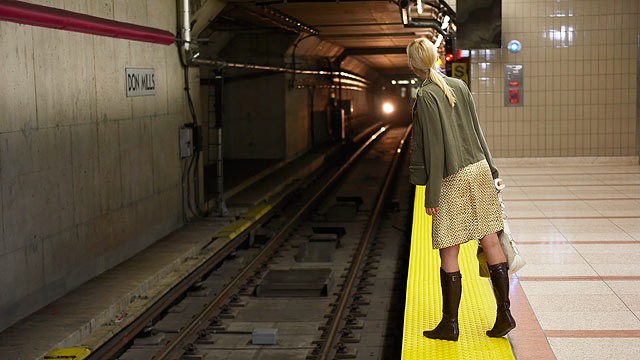 It wasn’t always this way. I used to be invisible in public when I was read as a heternormative white upper-middle-class cisgender boy. Looking back, it’s a privilege that I definitely took for granted. I never needed to be as aware of my surroundings as I do now. I didn’t have to think twice before walking by myself at night. I could go out to a bar without worrying about unwanted advances from strangers. Before transitioning, my only experience with the male gaze was from the sidelines. Growing up, I looked on as my guy friends ogled and objectified nearly every attractive girl they encountered. In real life, in magazines, or on screen, the socialization that I experienced broadcast the message that women’s bodies existed for male consumption. During my years in the frat, I’m ashamed to say that I remained silent when the “bros” gathered on the balcony to drink beer and harass any female that dared walk in front of the house. Desperate to blend in and dealing with my own internal struggles, I said nothing. I thought that this was just the way things were. After all, the entire Greek System seemed to encourage the notion that female bodies were a public commodity. Case in point: an annual tradition at my university is an event known as the “Running of the Girls”, in which all of the newly accepted sorority members sprint from the center of campus to their respective houses, in front of crowds of drunk cheering men. I remember watching this spectacle with mild curiosity, but having no idea what it must have been like for the girls being put through this ritual.

Years later, I think I can relate to how these girls felt. I’m not always subjected to overt sexual advances, but there’s never a day where I don’t get stared at. And just to be clear, I’m not trying to say that I think I’m so attractive that strangers simply can’t resist checking me out. Almost all of my female friends have the same experiences. Whenever I discuss this with them, the near universal response is: “Welcome to being a girl. Get used to it.”  I’m learning from first-hand experience that women in our society, in particular those whose presentation is femme, are much more visible in public.

“Don’t dwell on it too much,” my friends tell me. “After a while, you won’t even notice the stares anymore. You just learn to tune that stuff out.” Maybe they’re right. In time I’m sure that I’ll adjust to the attention. But for now, the increased visibility really fucks with my head sometimes; especially as a trans girl who only came out last December. I’m lucky to “pass” as cisgender. I’ve never had to deal with hurtful or inappropriate comments from strangers (about me being trans, at least). I haven’t been “clocked” or misgendered for several months. In spite of all this, I’m still prone to the occasional bout of overwhelming dysphoria when out in public. (I suppose that these moments of anxiety are to be expected, considering that I take the equivalent of dozens of birth control pills every day.) When this happens, it feels like I’m back on Day 1 of the transition and I want to hide under a fuzzy blanket until the feeling goes away. I want to be invisible. The last thing I need is for people to stare at me. Unfortunately, I haven’t been able to locate an off switch for the male gaze. It’s especially unnerving when I’m feeling anxious and I can’t determine what the stares mean.

At this point, I can tell the difference between a friendly smile and when a man is sexually interested in me. I know what a judgmental glare from someone who doesn’t approve of my girlfriend and I holding hands looks like. I also remember the looks of confusion I got when I first started experimenting with makeup and androgyny; you could see people trying to determine my gender. But often the stares are none of these. Not friendly, not sexual, not malicious; just blank. At first it really freaked me out, prompting my overactive imagination to come up with a dozen possible reasons for the attention. After talking to some of my male friends, I now realize that most of these blank stares are subconscious and unintentional. One trans guy described it to me like this: “I try to be super conscious and aware and not stare, but sometimes I don’t even notice I’m doing it. I’m just like Holy shit, who is that? Look at her! and then after a few seconds I realize what I just did and feel bad. Sometimes I feel like checking someone out is like a reaction that happens really quickly and can be hard to control.”  I guess that he has a point. To some extent, it’s human nature to stare. I’m guilty of it at times too, especially when I’m coveting a super cute outfit. And I’m sure it doesn’t help that my style trends toward bright colors, bows, and queer accentuated femininity. Can I really expect people not to stare when I dress like a 50’s housewife amid a sea of drab black pea coats? 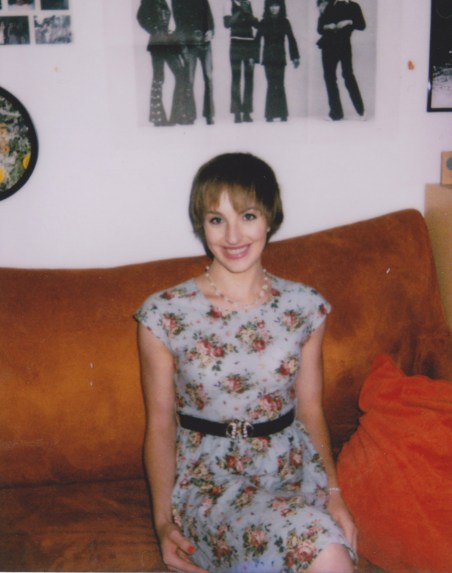 I haven’t only experienced this increased visibility when out in public. I’ve felt the effects of the male gaze online as well, but for an entirely different reason. I’ve tried to limit my online presence to primarily queer spaces, so I’ve been fairly isolated from the so-called “chasers”: men who are interested in me specifically because I am trans. However, a few weeks ago I discovered that my photo was being discussed on an erotic forum called “Tempting Transsexuals.” Sandwiched between the hardcore penetration images and close-up shots of genitalia was a  photo of me fully-clothed and sitting on a park bench. The person who posted the picture described me as “New TS Amateur Annika.” Apparently I was given the “amateur” label because although I have never been involved in pornography, the readers of that forum assume that it’s only a matter of time (because clearly all trans women’s bodies are there for their consumption).

As my hair grows out (since many straight men equate short hair with lesbian-ness) and the hormones continue to work their magic, I realize that invisibility is no longer an option for me. Fair enough; I can learn to tune out the stares like most of my friends do.   What really bothers me, however, is how much of an effect that male attention has on my mood and self-esteem, especially because I’m not even attracted to men. I dress and present the way I do because it feels comfortable and comes naturally to me. I certainly don’t do it to seek the approval of the male gaze. But I’d be lying if I said that I don’t feel flattered when guys hit on me.  I’m not exactly sure why. Maybe it’s a case of internalized heterosexism. It could be that it feels validating on some level, after years of hating my body and watching the boys my age obsess over the girls who I wanted so desperately to be. Whatever the cause may be, I realize that this need for straight male validation is deeply problematic and it’s something that I’m trying to be aware of. Though, I have to admit that the positive attention can feel empowering at times. It’s kind of fun to be able to get free drinks simply by batting my eyelashes, or having random strangers rush to open doors for me. Is it wrong to exploit the patriarchy for my own advantage while fighting to dismantle it at the same time? At any rate, I’m starting to realize that the male gaze is now a constant presence in my life.  Having now experienced public visibility from both sides of the societal gender binary, I can say that I had no idea just how different it would be. The increased attention can get annoying- but there’s no way that I would want things to go back to exactly the way they were before. Being a girl is too much fun!

Annika blogs at Transgender Express . Follow her on tumblr!