Spooky season is descending upon us — a time for horror movie marathons, fall themed beverages, orange candles boasting autumnal scents and a whole new month of television programs and movies with lesbian, gay and bisexual characters on Netflix, Hulu, Prime Video, Peacock, HBO Max, Showtime, Paramount Plus and Disney+. Unfortunately, this year our October is not the bounty I’d hoped it’d be, although I came across a bevy of new content for queer cis men, so that is nice for them. Furthermore, I feel like every time a queer show is cancelled, another one needs to be created. An eye for an eye, look it up! 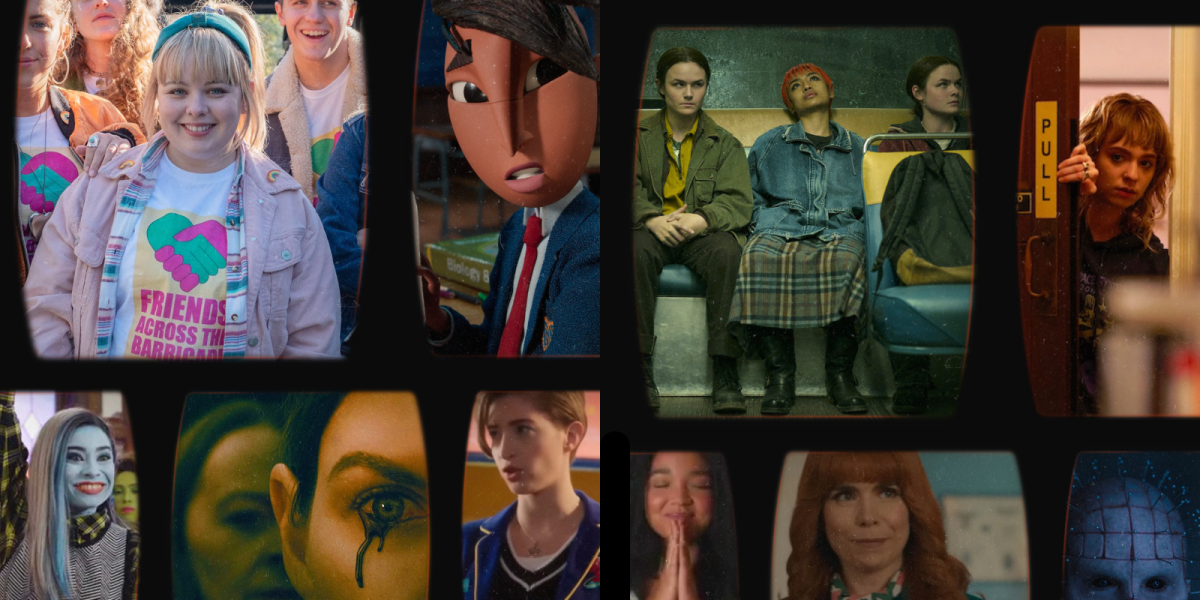 First of all I would like to say that I have spent an ungodly amount of time attempting to deduce if The Midnight Club or The School of Good & Evil have queer female and/or trans characters and I remain SADLY STILL unsure.

This classic based on Alice Walker’s novel is set in rural Georgia and is a raw emotional account of pain, passion and survival told by Celie, who seizes your whole heart with letters that trace her coming of age, falling in love for the first time and breaking free. The film de-gayed the story significantly, but subtext remains loud enough for the queer eye.

Queer comic Nicole Byer celebrates Halloween hosting a new season of home bakers battling it out for the Netflix crown.

Sadly it is our final season with the Girls of Derry and we can look forward to a little love interest for our dearest girl Clare in a show Heather described as “consistently one of the best surprises on TV.”

The conceit of this program starring beloved Bake-Off co-host and comic Sue Perkins is apparently that Sue will be “learn[ing] about Latin American people and their attitude towards authority, love and life by doing things that she never could or would do at home… in adventurous, shockingly legal and sometimes dangerous ways.” Honestly I do not love this premise!!

This is what our TV Editor Heather told me about Dead End: Paranormal Park: “Barney Guttman is the jewish trans queer teen guy who lives in the haunted house and he has a crush on his best guy friend, Logs (Logan). Norma is autistic and probably the best portrayal of autism i’ve seen/read praise about. She’s very queer in the comics but not queer on the show yet. Lots of speculation she will be this season.

Comic Fortune Feimster is a lesbian and she will be sharing stories about her life including “getting engaged, getting iced and getting a mind-blowing butt massage.”

This traditionally very queer-inclusive cartoon show will explore “a whole new slate of cringeworthy situations and heartwarming vulnerability” in its sixth season.

Henry Selick and Jordan Peele’s stop-motion horror comedy film features two scheming demon brothers, Wendell and Wild, who get 13-year-old Kat Elliot (Lyric Ross) on board to summon them right on back to the Land of the Living. Most importantly for our purposes here today: Wendell & Wild the first animated film to feature a trans male supporting character! Raul is played by trans actor Sam Zelaya and he’s the only boy at Kat’s Catholic School and Kat’s best friend. “This isn’t just inclusive children’s entertainment,” Drew wrote of the film. “It’s inclusive children’s entertainment that actually engages with the realities of the people it represents.”

Prime Video’s Offerings To the LGBTQ+ Audience In October 2022

“This film explores some of my favorite themes all in one glossy, campy, self-aware package: misandry, women being extremely gay together, principled revenge, and the triumph of aught culture.” – Erin Sullivan, “I Watched Lebianish Classic “Jennifer’s Body” and Now I Love Cinema!”

Queer Canadian TikTok twins Railey and Seazynn Gilliand star as Tegan and Sara Quinn in this adaptation of the legendary musical duo’s memoir, High School, set in ’90s Calgary, Alberta, and featuring Colbie Smulders as their Mom! It’s executive produced, co-written, directed, and co-showrun by Clea DuVall! It’s full of queer teen angst and awkwardness and first loves and heartbreaks and self-discovery! We are so excitant for this one!

The Peripheral: Season One Premiere – October 22

Based on William Gibson’s 2014 book, this series stars Chloë Grace Moretz as a young woman in a small forgotten town in future America, trying to hold together the pieces of her broken family while lacking a viable path for herself, until she comes in contact with a device that connects her to an alternate reality and a dark future of her own. Alexandra Billings has a recurring role as Detective Ainsely Lowbeer, who is transgender. Queer actor T’Nia Miller is also in it, and I don’t know what role she is playing, but I hope it’s a gay one!

Hulu’s Lesbian and Queer and Trans Characters for October 2022

Bisexual hacker Lisbeth Salander (Rooney Mara) helps Journalist Mikael Blomkvist track down a woman who’s been missing for 40 years! This celebrated film is chock-full of trauma, dark mysteries and cold landscapes. It’s possible that Ronney Mara made you gay when you first saw this film, or perhaps you were already gay after seeing Noomi Rapace play Lisbeth in the Swedish film that came out in 2009.

Beloved trans actress Jamie Clayton will be the first woman to play the androgynous Pinhead in this re-imagining of the classic 1987 horror film, long considered “queer-coded.” In the new version, “a young woman struggling with addiction comes into possession of an ancient puzzle box, unaware that its purpose is to summon the Cenobites, a group of sadistic supernatural beings from another dimension.”

This unpleasant body horror film follows a lesbian with some sort of office job who does a lot of coke, overdoses, gets a mysterious disease and then heads to her childhood home to confront her personal demons, only to find that her mother is even more bananas than she remembered and the entire town is full of creeps and something terrible is happening to everybody!

This is an important film about a mother who yells at her tiny daughter Natalie Portman who grows wings maybe out of her shoulder-blades and has to turn around again and again and be a better ballerina, and at some point something sexual happens with MIla Kunis.

Shows Debuting on Hulu the day after their network premiere:

Reginald the Vampire: Season One Premiere – October 6
Reginald debuts on Syfy on October 5th, and will be available the next day on Peacock

Reginald Andres (Marvel’s Jacob Batalon) is an unlikely hero living a life of dreams deferred and about to find himself unprepared to navigate numerous obstacles as he enters the world of beautiful, thin, self-obsessed vampires in this “feel-good, heartfelt, kind of a bit stabby vampire bloody type of show.” Based on Johnny Truant’s Fat Vampire books, queer non-binary actor Marguerite Hanna plays queer non-binary character Ashley Weeks, who works with Reginald at Slushy Shack.

Chucky: Season Two Premiere – October 6
This show debuts on Syfy on October 5th, and will be available the next day on Peacock

There is a part in the trailer for Season Two of this campy horror flick where Tiffany Valentine’s daughters find Nica Pierce held captive in their house and Nica is like “your mother is a psychotic murderer, I think she’s in love with me and she chopped off all my limbs and she’s kept me trapped up here for over a year” and one of the daughters is like “Mom’s a murderer???” and the other is like “Mom’s a LESBIAN?!!!” and anyhow, so there you go on that. Non-binary actor Lachlan Watson (Chilling Adventures of Sabrina) plays Glen and Glenda, the doll to which the Bride of Chucky gave birth. (I don’t know what that means, I’m just a vessel of information.)

Simon, who dropped dead in Season One, was best friends with Janae, who is a lesbian, and gradually became part of the “Murder Club” of kids who were in detention when Simon died. In Season Two, Janae and the other teens will fight “to protect their secret, themselves and each other.” Also she’s kissing Maeve in the trailer!

The animated Star Trek series aimed at kiddos has been applauded for its non-binary character, Zero. Zero is a Medusan, an energy-based species that has no gender or corporeal form (living the dream, honestly).

LGBTQ+ Inclusive Shows Debuting on Paramount+ the day after their network premiere:

In Season Two Marvyn (John Stamos) is hoping to recruit a new volleyball player to their basketball team after she was ousted from her own following an extreme public tantrum while tensions build when the Sirens lose their assistant coach to a rival team. In Season One, Carolyn “Mouse” Smith came out to her friend Harper and confessed her crush, so we’ll see how that all plays out in Season Two.

Season Three of this psychological thriller formerly housed at Epix “begins after a five-year time jump: the civil war is over, and a cultural revolution has changed the world for better or worse – ushering in a new age of Super Heroes and Supervillains.” Paloma Faith, who plays the “delightfully sadistic” queer foe-turned-friend Bet Sykes, confirmed that Season 3 will be “a bit more DC,” cartoony” and “quite fun.”

A documentary that takes a look at the wild life and career of Sinead O’Connor, including the incredible fallout of her ripping-up-a-pic-of-the-pope appearance on Saturday Night Live. Yes we ARE going to redeem another emotionally intense ’90s woman who got unfairly maligned!

Cecelia (Aisha Dee) is a (queer) social media influencer who peddles promisees of wellness to independent millennial women when she runs into Emma (Hannah Barlow), her former BFF — they had a viscous friend breakup instigated by a third friend, bully Alex (Emily De Margheriti) — and is invited to her (gay) Hens weekend (she’s about to marry Fran (Lucy Barrett) in a remote cabin in the mountains. But it turns out to be Alex’s cabin, and Alex is there to make Cecelia’s life a living hell! The film will also hit cinema theaters in Australia on October 27th.