Lesbian musician Kaki King got 16 artsy kids together and had them paint guitars that looked like songs, and Katrina Dangercaine was there. So were many other hipster lesbians. Read all about Kaki King’s art show. Also, Riese & Alex spent like a month making the Top Ten Lesbian Fashion Icons of all time so you should probably read it again.

Also if you’re looking for an apartment in New York City near Columbia University, hit up autostraddle.

FAG HAGS: “Of the many gifts that “Will & Grace” bestowed upon my generation of gay men — increased visibility, cultural cachet, a naive understanding of New York apartment sizes — one of the most significant was the popularization of the fag hag (a term the show’s buttoned-down characters were too demure to even utter on air).”

TV ACTION: Evan Rachel Wood was “cutting herself on camera at the age of 14 and making out with chicks.” Read all about it in BlackBook. (@design scene)

SUPERHEROINES: A Brief Herstory of Louis Lane. There are very serious injustices happening in the world right now, for example – “Lois is the most important character in Superman’s mythos other than himself and, as such, deserves better attention, particularly as she has always reflected conflicting attitudes toward women, especially talented, independent women.” (@bitch)

MORE MADMEN: Many Americans do not understand why the TV series “Mad Men” is considered so amazing but nonetheless are pretending that they do. (@huffpo)

TRANS-SURGERY KITS: A Transwoman Performs Own Surgery after Transition Delay. Leaving us to wonder if anyone else knew that you could purchase home surgery kits? (@pink news)

WOOLF: The only recording ever of Virginia Woolf speaking. (@feminist law professors)

FEMINIST MADWOMEN: A Feminist Perspective on Mad Men. An exploration of AMC’s hit series through a feminist lens, featuring such quotes as “She’s taken to your tools like a little lesbian” and “This place is a gynocracy!” (@feministing)

MADONNA: Madonna Performs, Polish Sing Traditional Birthday Songs, Shake Angry Fists: “Madge’s stop in Warsaw fell not only a day before her birthday, but also on the August 15, the Roman Catholic holiday celebrating the heavenly assumption of the Virgin Mary – timing that angered some Catholics.” (@365 gay)

CHOOCAINATRON: Cocaine Rumors Are True According to a University of Massachusetts study, 90% of American bank notes contain traces of cocaine. (@ny times)

LADY WARRIORS: For Women in the Military their success, widely known amongst military people, remains largely hidden from the public, mostly due to the circumvention of policy necessary for them to work in combat branches. (@ny times)

PRESIDENT GAGA: Lady Gaga Pulls Crazy Shit, We Continue to Enjoy It.“Today this song is about Jesus, the most famous man in the world.” (@ohnotheydidnt)

↑ Maggie Gallagher throws a party to celebrate marriage with all her cronies from NOM and her husband doens’t bother showing up. I love the smell of Conservative Christian Hypocrisy in the Morning.

↔ Homeland Security Secretary Responds to Lesbian Rumors. Janet Napolitano responds to the idea that men just don’t know what to make of women who choose to be single. rumors of lesbianism have dogged women in politics. We suggest the men take a look at the men in the mirror, and ask him to make a change and try harder to win the heart of Condoleezza Rice. (@nytimes) 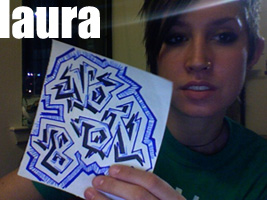 Intern Hot Laura’s No on 8 Campaign

↓ HATE SPEECH: “Don’t people realize that gays are being hung in Iran or bombed in Israel. People should stamp out hatred whenever they see it, and I was disappointed and ashamed that this certainly wasn’t the case with the staff at the night club“: Gay Foppish Dandy Assaulted, Blogs About It.

↓ A DRESS OF GUNS: Guns Out at Town Obama Hall.“There were people. With guns. Outside a Presidential venue. “ (@sf chronicle)

↓ Anchorage Gay Rights Measure is Set Back by Mayor’s Veto. Probs ’cause of the wild game. (@nytimes)

↔ THINGS WE ALREADY KNEW: Gay Footballers Exist. A survey of 85 college football players shows that nearly half of them know of at least one openly gay athlete actively playing on their team. (@advocate)

↓ MORE BAD NEWS FOR ISRAEL: Israeli Military’s Chief Rabbi Accused of Hating Women, Gays.“Rontzki has been accused of speaking out against military service for women — he denies it — and after Israel’s army magazine, profiled a homosexual major, Rontzki wrote to several senior officers to protest. (@queerty)

from Intercaine Katrina: I like this because I thought I was the only person to find this kind of grammatical error “funny.” Check out the blog of unecessary quotation marks.

CHECK OUT THESE CUTE SOCKS ALL CAPS.

I believe that Rick Astley mash ups are never going to get old. Here’s Rick Astley vs Nine Inch Nails, The Hand That Never Gives You Up.

This is very topical to a recent conspiracy theory that Team Autostraddle has uncovered. Furthermore, it’s a new poem by Stephen Dunn at The New Yorker: “Would the connection between the comic and the appalling, as it pertained to clowns, be suddenly so clear that you’d be paralyzed by it?