Think about your favorite — or not so favorite — menstrual hygiene product commercial. Usually some racially ambiguous person who presumably menstruates floats across the screen in a lily white dress, enjoying their life until “Mother Nature” ruins everything. The protagonist loses all hope in ever smiling again now that their period has arrived. Luckily, some Playtex™, Kotex™, Always™, or Stayfree™ product saves the day with a promise of “incredible protection and all-around comfort.” Oh yeah!

Menstruation products are a big deal with respect to the U.S economy, with over $2 million spent on menstrual hygiene products every year. The average person who menstruates uses about 300 to 420 tampons and/or pads a year, spending anywhere between $100 and $225 solely on their period. That’s a lot of money and a lot of hygiene merchandise! However, the welfare of people who menstruate has proven less important to the companies who profit from these goods and to the government given that little research has been done to determine how safe menstruation products really are. Even though so many people in the United States use menstrual hygiene products, the businesses profiting from this population does very little to inform menstruating consumers about what they are putting into their bodies. 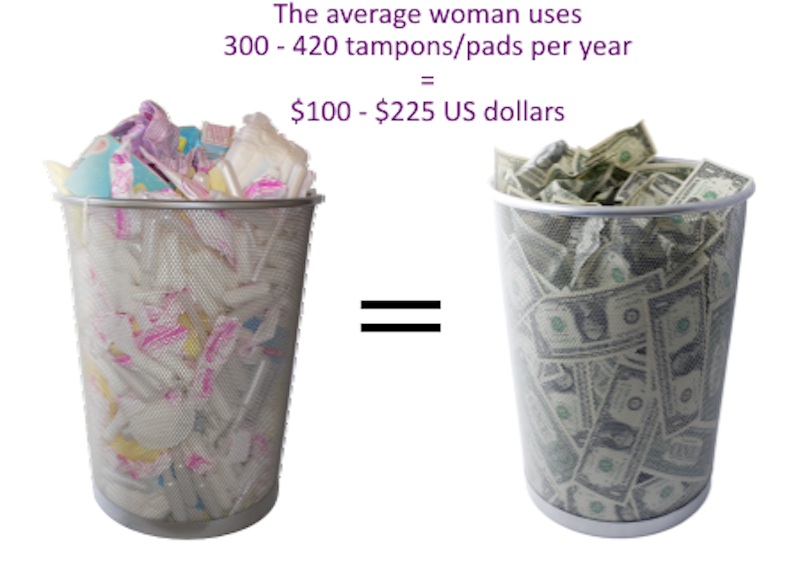 At the end of May, Congresswoman Carolyn B. Maloney (D-NY) introduced a new version of proposed legislation that would require further research into the health effects of menstrual hygiene products. The bill, named The Robin Danielson Act of 2014, “would require the National Institutes of Health (NIH) to research whether menstrual hygiene products that contain dioxin, synthetic fibers, and other chemical additives like chlorine and fragrances, pose health risks,” according to a press release issued by Maloney’s campaign. The Robin Danielson Act would also demand that the FDA publicly disclose the list of contaminants in menstrual hygiene products. This latter portion of the legislation is really important because many of these companies that sell menstruation products keep the public unaware of the chemicals used in the bleaching and fragrances of pads and tampons. Alexandra Scranton, Director of Science and Research for Women’s Voices for the Earth and author of the report Chem Fatale, explained the importance of knowing what elements are used in menstruation products. Scranton insists, “A number of different chemicals of concern may be found in feminine care products, but there simply has not been sufficient research to determine the effects of these chemicals on one of the most sensitive and absorptive areas of a woman’s body.” Given that little research has been done on these potential toxins, we have no way of knowing if there is any connection between menstruation products and cervical cancer, or any vaginal/uterine health issues. That type of scientific ignorance is medically and socially irresponsible towards people who have periods and rely on hygiene products like pads, tampons, cups, liners, and sponges.

For people to make informed choices about their health and hygiene, there must be more information about menstruation products. People who have periods have already been down this road of insubstantial research and unsafe marketing. In 1979, Proctor and Gamble released Rely, marketed as a super absorbent tampon made with compressed beads of polyester and carboxymethyl cellulose that could absorb up to 20 times its weight in fluid. Rely entered the menstrual hygiene product scene although there were no federal guidelines as to what materials were safe to insert into a vagina. Because Rely could hold so much moisture — more moisture than what is generally present in a vagina — if the product remained inside the body for long enough, it would dry the vaginal walls and lacerate the user’s vagina as it was removed. Furthermore, when researchers finally looked into Rely, the product was found to filter the bacteria that causes toxic shock syndrome and many people were ill or died because capitalistic ventures took precedence over people’s vaginal health.

I like my menstruation products. But, do you know what I like even better? I like the idea that what I put inside, outside, or anywhere near my vagina is safe enough to be in the immediate vicinity of my uterus. The blatant disregard that the government and consequently scientific research has demonstrated towards people who menstruate is but an extension of our society’s institutionalized misogyny. For example, a few groups have been doing studies on how Viagra affects people with penises, even though the pill was approved by the FDA in 1998, but Congresswoman Maloney is proposing her legislation for the government to step up its menstrual hygiene product regulations for the sixth time. Since 1999, the United States government has rejected attempts to make better provisions for menstrual hygiene management. The government and sanitary products companies’ attitudes suggest that when the health of people who have periods is at stake, their wellbeing is less than a major priority. We should not have to beg the government to make the necessary provisions to keep our bodies safe. People who menstruate cannot afford unsafe standards or provisions for hygiene products.