Thanks to an outpouring of support, we made our fundraiser goal in JUST FIVE DAYS!!! Thank you if you’re an A+ member or if you donated. This support means that Autostraddle can survive through January, that we’re okay for now. But as we look ahead to an actually pretty scary 2023, we have to acknowledge that we need more monthly A+ members on our side in order to continue to keep this space around. So many of our incredible writers and team members wrote posts for the fundraiser, and we’re going to run them through the 12th, during our Monthly A+ Member Drive. If you sign up at the $6/month level or higher as a monthly member before the midnight PST on the 12th of November, you’ll get a bonus pack of 4 stickers, too, on top of the usual perks. So, what do you say? Will you join?

The very first thing I got paid to write for the internet was in 2012 for an LGBTQ+ website, and it was an article about Once Upon a Time. “But Valerie,” I hear you protest. “Once Upon a Time wasn’t queer yet in 2012.” And you would be right to say so! But canon LGBTQ+ characters were so limited that queer media websites had to fill their homepage with anything they could find. This included wildly popular non-canon ships like Swan Queen.

To rewind even further, the way I even got started writing about TV was on my personal blog. I had started writing Glee recaps because I couldn’t find ones I liked. Searching Google for Glee recaps was useless because it was so popular that the only results were from mainstream websites. (And this kept me from finding Autostraddle sooner! Rude.) These websites were fawning over Rachel and Finn or shipping Quinn and Puck. No one was seeing the spark between Rachel and Quinn. Most egregiously, no one seemed to be paying NEARLY enough attention to the one, the only, Santana Lopez and her right hand woman, Brittany S. Pierce. So I wrote my own. Heather Hogan actually scooped me up from those silly little recaps and helped me work on a pitch to submit to the aforementioned website. (We ended up writing there together before we came to Autostraddle, separately but perhaps inevitably.) And I did get to write about canon queer characters finally, on shows like Orphan Black, Rookie Blue, and even Once Upon a Time when it eventually got gay.

In the past decade, a lot has changed. Now we have so many canon LGBTQ+ characters that we have an entire TV Team at Autostraddle. And we can barely keep up with all the shows and storylines! Queer fans used to have to make up our own hashtags (like #clonesbians) to find each other. No one was talking about the same characters as we were in the main hashtag! And now we have shows whose main cast is hyping up our queer ships on their Twitter feeds.

But some things haven’t changed. It’s still hard to find journalists who watch TV the same way you and I do. It’s hard to find anyone who doesn’t care as much about the lore of the totems that the team needs to collect and cares more about whether Sara and Ava are just going to admit their feelings for each other already. I’ve been spoiled, I admit, working in queer media for as long as I have, that sometimes I forget this fact. But then I’ll get snapped back to reality. When I watched Black Sails, Eleanor Guthrie was the main character. Her relationship with Max and Max’s relationship with Anne Bonney were paramount to the story, practically the entire point of the show. But after a HUGE Eleanor episode, the creators hardly mentioned Eleanor at all in an interview about it. It was just about the explosions they set off and the “journey” the male characters went on. Again, I remembered: not everyone watches TV the way we do.
Some people grumble about how much “easier” younger generations have it. Like how our parents walked to school in the snow uphill both ways. But not me. I’m glad Gen Z doesn’t have to wait until Sweeps Week to even start hoping for two girls to kiss. I’m relieved that anyone exploring their sexuality doesn’t have to search “lesbian kiss compilation” on YouTube, go to the description for timestamps and show names, then watch that show on Megavideo 72 minutes at a time. I’m thrilled you don’t have to wait three days for one episode of Lost Girl to download. I’m so happy you don’t have to watch a show just because it’s gay, that you have shows to choose from. I’m ecstatic Autostraddle exists so you can open a streaming guide and find something that looks interesting to YOU. Even if you disagree with the opinions of whoever reviewed the latest queer TV show or movie, that they’ll have been paying attention to the same characters and relationships you were. (And then, on top of that, the comment section is, more often than not, a place for debate and discussion, not a village of trolls smashing everything in sight.)

Autostraddle is a special place, but it’s also a rare place. There aren’t a lot of places that are for us and by us. Have you ever been to a comic con panel for a show that has a queer side plot that isn’t part of the main plot? If you haven’t, it goes like this: you and your friends sit together, and when the queer characters are mentioned for the first time, you will all ‘woo!’ with the gusto one has when you assume the whole room is going to ‘woo!’ But then…they do not all ‘woo!’ Only you and your friends ‘woo!’ And that’s when you’ll realize no one is as invested in our stories as we are. No one will celebrate and criticize them with the care we do.

Mainstream sites will write cookie cutter reviews that have no opinion, no stake in the content, all written in the same voiceless tone. Meanwhile we could have every person on the Autostraddle TV team write a review of the same piece of media and get very different opinions, interpretations, and styles of writing. Do you know how many mainstream sites were writing more about Mon-El than Lena in their Supergirl reviews? I didn’t mention his name in most of my recaps. And not only did my editors support it, they encouraged it. On a mainstream site, a cis white male writer will say he “didn’t connect” to the queer characters of color, like he was ever meant to. It’s why Autostraddle had to come up with our own TV Awards! No matter how many stunning, perfect queer shows are made, one thing has always been true: mainstream media will never care about us as much as we care about each other.

I want Autostraddle to keep being a place where people can come together and love shows and movies the way we do. I want us to keep breaking down The L Word trailers frame by frame. I want us to keep lightly roasting shows while celebrating their strangely placed queer B plot. I want us to obsess over shows together to the point we make shopping guides and quizzes about them.

So while things are changing slowly but steadily in the right direction, I cannot express to you how quickly things will backslide without independent queer media. Too many networks don’t spend the same kind of money on advertising their queer shows as they do their biggest properties. It’s up to us to spread the word, to make noise on social media, to remind the mainstream that we’re here, we’re queer, and we want to see our stories on screen. And without sites like Autostraddle, that job will become exponentially harder. Because as I said before: no one cares about queer people as much as queer people. We have to do what we can to support each other and lift each other’s voices. Together, we can be loud enough to be heard. And the best way to ensure a long-lasting future is to commit to a monthly A+ membership; A+ members are the foundation Autostraddle stands on, and the more members we have, the stronger we’ll be. And unlike your streaming service subscriptions, we’ll never bury a gay, or cancel your favorite show. In fact, we’ll still talk about those canceled shows long after they’re gone, keeping their memory alive. Will you join your fellow Autostraddle community members in supporting our fundraiser by joining A+ as a monthly member? Every single person matters so much when it comes to running an indie outlet like this one.

And also, today’s the last day to sign up for an A+ monthly membership at the $6 a month level or higher and receive a special fundraiser sticker pack (pictured below) as an extra special bonus. Sign up today? 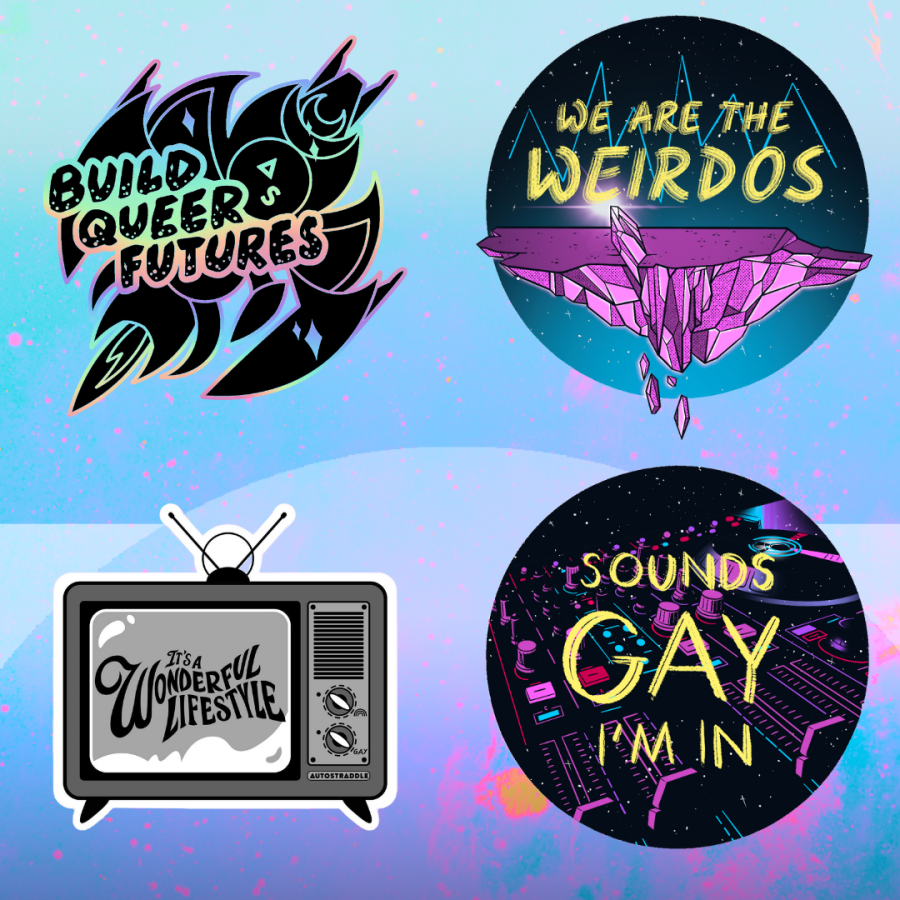 The sticker pack in question.