+ Two major federal lawsuits, one out of Wisconsin and one out of Maryland, will highlight issues of trans students’ bathroom access in schools. In both cases, schools have attempted to force trans students to either use unisex bathrooms or the bathroom/locker room associated with the gender they were assigned at birth. In both cases, the trans students in question have articulated how this policy is harming them and their educational experience:

The Talbot County, Maryland student, called M.A.B. in the lawsuit, is interested in joining the school soccer team but said the lack of locker room access makes it difficult to participate or bond with other boys. The single-occupancy bathroom is also far from his classes, forcing him to wait longer to use the bathroom than other students and has made him late to physical education class. The Kenosha, Wisconsin student, Ash Whitaker, who, due to medical issues, has to drink a lot of water, tried to stop going to the bathroom at school, endangering his health.

One very disturbing detail of the Wisconsin lawsuit is the school district was apparently requiring school staff to make openly trans students wear green “identifying” bracelets, a terrifying prospect given the risk that trans students are often at for violence from other students and staff without being explicitly labeled.

There likely won’t be a verdict in these suits for some time, but the legal precedent set by them may be significant in the years to come.

+ Black women are the US demographic most concerned about the outcome of the presidential election, polling finds, with 3 out of 4 Black women “strongly afraid” of what will happen if Trump wins.

+ Donald Trump gave a speech at the last night of the Republican National Convention last night. It was very scary, both intentionally and not, and also very, very factually incorrect. Here’s the annotated and fact-checked version from NPR. 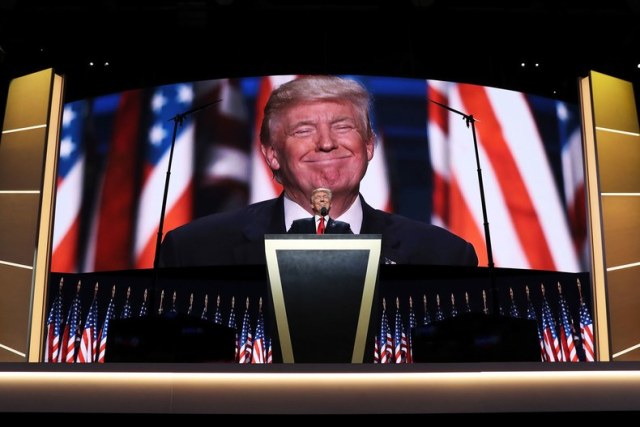 + The NBA has announced it will move its 2017 All-Star Game out of North Carolina to protest HB2, causing North Carolina to lose “millions” in revenue from hosting. New Orleans is considered a likely new location.

+ New York Liberty and Indiana Fever WNBA players are uniting to support Black Lives Matter and draw attention to the movement, and aren’t backing down even after being fined by the WNBA and criticized in the media. They’ve staged a strategic media blackout, refusing to answer reporters’ questions about basketball and instead inviting them to ask questions about their stance.

“We feel like America has a problem with the police brutality that’s going on with black lives around here, and we just want to use our voices and use our platform to advocate for that,” said [Tanisha Wright of the New York Liberty]. “Just because someone says ‘Black Lives Matter’ doesn’t mean that other lives don’t matter. People put out this imaginary ‘black lives only matter’ whenever people say, ‘Black lives matter.’ What we’re saying is, ‘Black lives matter, too.’ Period.” 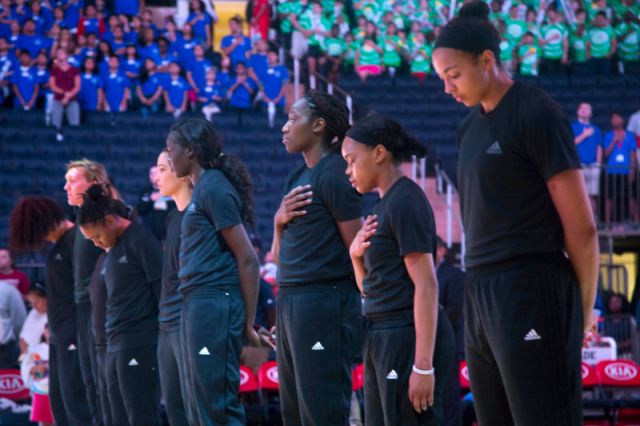 + This week the Black Youth Project 100, Black Lives Matter DC, and Million Hoodies NYC coordinated protest actions in DC and NY calling for “officers who are interested in justice” to stop paying dues to the Fraternal Order of Police and in NY, for the firing of Wayne Isaacs, the officer who killed Delrawn Small. As of Wednesday, ten activists were arrested at the action in NYC.

+ A woman with bipolar disorder broke down while testifying in court about her traumatic rape and ran out of the courtroom; her mother was told she would be taken to be “treated in a mental health facility,” but she was instead taken to county jail and held there for a month under a witness bond, “a law that allows a witness to be held without bail to ensure they show up to testify.”

+ Police Lt. Brian Rice, the highest-ranking officer involved with Freddie Gray’s death in a police van in Baltimore, MD, was found not guilty on all charges. He had been charged with involuntary manslaughter, reckless endangerment and misconduct in office.

+ On how environmental justice and police brutality are crucially interconnected issues.

+ Earlier this week the North Miami police department was very terse and vague about why one of their officers fired three times at a 23-year-old unarmed autistic man and an unarmed behavioral therapist who was working with him, saying they needed to investigate what had happened; now they’re saying that the officer had perceived Rinaldo, the autistic man, to be a threat to Charles Kinsey, his behavioral therapist, and was trying to “protect” Kinsey — even though Kinsey is the one who ended up shot, and Kinsey is on video clearly articulating to officers that he’s in no danger, Rinaldo is unarmed, and that there was no need to use force.

+ A Milwaukee federal court has ruled against a restrictive voter ID law, and says in their decision that “voters who could not provide acceptable photo identification must be allowed to seek and use an affidavit that confirms their identity.” The voter ID law and others like it have long been criticized for disenfranchising marginalized voters who may be poor, young, of color, and/or all of the above.

+ In Texas, a federal appeals court has ruled that a voter ID law there discriminates against minority voters, and has told the lower court to “devise a remedy” by November.

+ NC legislators have made “minor changes” to discriminatory law HB2, which “[restore] workers’ ability to use state law to sue over workplace discrimination, but leaves sexual orientation and gender identity unprotected.”

+ Pakistan will pass legislation to prevent “honor killings;” the law will do away with a loophole that “permits the family of the victim to legally pardon the killer.”

+ Two people, Rashad Deihim and Kailyn Bonia, were convicted in the case of raping a then-16 year old girl and broadcasting it over Snapchat in 2014.

+ In Georgia, the practice of “upskirting” — taking a photo or video up someone’s skirt without their consent — has been ruled legal. The judges say that the act isn’t technically criminal — even though it’s only because the technology used to take these photos or videos wasn’t invented yet when the state’s peeping tom laws were written.

+ The US Justice Department is suing to stop a merger between healthcare giants Aetna and Humana, saying that it violates antitrust laws and would raise healthcare costs for the average citizen.

+ Corey Menafee is a dishwasher at Yale University who broke a decorative window panel out of opposition to the scene it depicted, which depicted enslaved Africans laboring, and was subsequently fired. Now Yale has rehired him, although they’re not acknowledging any validity to his act of protest and are instead framing Menafee as remorseful.

+ New England prep school Philips-Exeter Academy is facing criticism about its handling of sexual assault between students, including a case where administrators decided to have an assailant bake bread each week and deliver it to his victim, which forced her to come in direct contact with him at least weekly.

+ Crystal Raquel Cash, a trans woman in Indiana, was shot in the jaw by Gerald Duane Lewis, who is allegedly affiliated with a hate group according to the SPLC. Fortunately, Cash survived the attack.

+ Roger Ailes, former chair and CEO of Fox News, has been ousted at Fox after accusations of sexual harassment; he will be replaced by Rupert Murdoch, who is also truly, truly awful.

+ Planes from a US-led coalition killed “dozens” of Syrian citizens in an airstrike this week, with estimates of the deaths ranging from “at least 56” to “above 120.” Syria is calling for an end to the airstrike campaign said to target ISIS, and for development of better guidelines and accountability from the West.

In a statement, the president of the Syrian opposition coalition, Anas Alabdah, said the bloodshed indicates “a major loophole in the current operational rules followed by the international coalition in conducting strikes in populated areas.”

He added: “It is essential that such investigation not only result in revised rules of procedure for future operations, but also inform accountability for those responsible for such major violations.”

+ Leslie Jones talked with Seth Myers about Ghostbusters and about her recent experiences with gendered racist harassment on Twitter, and about Twitter’s failure to address it. She says that she’s spoken with Twitter CEO Jack Dorsey, and that “the social media network needs to make the reformation of their weak harassment policy a bigger priority to protect users that don’t have Jones’ access and platform.”