Hey blooming onions! How was your Pride weekend? I accidentally bought 20 tacos and went to the pool.

The Highest Court of the Land

Obvi, the Marriage Equality ruling has been the Biggest thing to come out of the Supreme Court, but they ruled on a bunch of other things too. Here’s a few that you might want to know more about:

+ On Monday, in a 5-4 vote, the Supreme Court decided to put a temporary hold on a ruling that would have closed 10 out of 19 remaining abortion clinics in Texas. The case revolves around strict abortion legislation that passed in 2013 which would have required abortion clinics to meet hospital-like standards including regulations regarding buildings, equipment and staff and required doctors who perform abortions to have admitting privileges in a nearby hospital. Earlier this month, the U.S. 5th Circuit Court of Appeals upheld most of the strict abortion law and denied a request from abortion providers to delay the closing of all the clinics. Then the abortion providers appealed the law and turned to the Supreme Court to intervene in implementing the law.

+ The Supreme Court will take a second look at how race plays a factor in admissions at the University of Texas at Austin, potentially ending affirmative action at public universities. SCOTUS will take a look at Abigail Fischer’s case next term. She was rejected from the University of Texas at Austin and brought the suit in 2008, basically arguing she didn’t get in because she’s white. She didn’t qualify under the “Top Ten Percent” rule in Texas, which automatically admits high school students in the top ten percent of their class to Texas public universities. Students who didn’t make the mark could get accepted if they had an exemplary admission application, with race being one of those factors. The Supreme Court heard Fischer’s case in 2012 which was returned to the Fifth Circuit Court of Appeals, which sided with UT Austin.

+ The Supreme Court struck down a provision of the Armed Career Criminal Act that says someone’s past crimes count as violent if they involve the risk of serious injury, even if the crime didn’t involve violence. They need Congress to define what a “violent felony” entails.

Race and the South

+ A local KKK group from North Carolina reserved the South Carolina statehouse grounds for a rally next month. They’ll be protesting in support of the Confederate flag flying on the grounds. James Spears, a leader of the group said “It’s part of white people’s culture.” The event is planned for July 18 from 3-5 p.m., just over a month after the Charleston massacre. The statehouse grounds is open to anyone to reserve regardless of ideology on a first-come, first-serve basis.

+ Six churches with predominately black congregations in Southern states have burned, with half of them being investigated as arson. The FBI and the Bureau of Alcohol, Tobacco, Firearms and Explosives, along with local authorities are investigating to find out who set them. So far authorities say they don’t look like hate crimes and only two might be arson. The church fires come days after Dylann Roof shot and killed 9 black people during a prayer service at Emmanuel AME Church in Charleston. Columnist David A. Love writes for the Atlanta BlackStar:

“From slavery and the days of Jim Crow through the civil rights movement and beyond, white supremacists have targeted the Black church because of its importance as a pillar of the Black community, the center for leadership and institution building, education, social and political development and organizing to fight oppression. Strike at the Black church, and you strike at the heart of Black American life.”

+ Bree Newsome, a 30-year-old teacher and activist from Charlotte, North Carolina, scaled a 30-foot flagpole in front of the South Carolina statehouse and took down the Confederate flag early Saturday morning. An activist named Jimmy Tyson assisted Newsome while she climbed the flagpole. They were arrested and charged with “defacing a monument” soon after Newsome climbed down. Supporters quickly started a petition to drop the charges and raised money to bail them out. Bree was made into lots of cool art depicting her as a superhero.

In a statement posted on Blue Nation Review, Newsome says the Charleston massacre was a turning point for her. “A white man had just entered a black church and massacred people as they prayed,” Newsome wrote. “He had assassinated a civil rights leader. This was not a page in a textbook I was reading nor an inscription on a monument I was visiting. This was now. This was real. This was—this is—still happening.” She talked about how she and other activists strategized to put a plan into action and ultimately choose a black woman to scale the flagpole while a white ally stood by to help, “as a sign that our alliance transcended both racial and gender divides.”

“We made this decision because for us, this is not simply about a flag, but rather it is about abolishing the spirit of hatred and oppression in all its forms,” Newsome said.

All the Pride Things 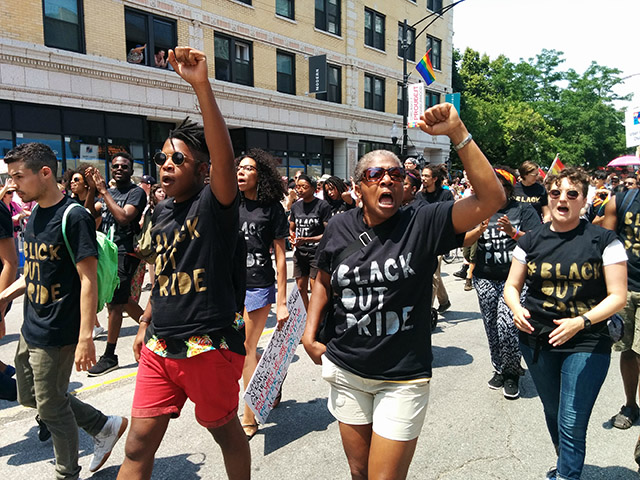 + Black queers in Chicago disrupted the city’s Pride parade for about 15 minutes as part of their #BlackOutPride die-in and speak-out action. The group blocked the intersection of Addison and Halsted in the heart of Boystown, an intersection representative of “corporate greed, private exploitation of queer communities, hyper policing, and ground zero for violence perpetrated against trans and queer young people by the city of Chicago.” In their public statement, they stated their reasons for the action:

“We do so to honor our trans, queer, Black, Brown and Native ancestors. We do so because our people are dying at the hands of police, military and state-funded militias around the globe. We do so because we refuse to be tokenized by the same corporations that sponsor state violence, refuse a living wage and profit off our poverty. We do so because young queer people need a better outlet to celebrate themselves than a mire of consumption and sexual violence.”

+ An anti-gay Jewish group hired Mexican day laborers to protest the NYC Pride parade on Sunday. They wore Tzitzit prayer garments and held signs that read “G-d created Adam and Eve, not Adam and Steve,” “Judaism prohibits homosexuality,” and “Today man marries man, tomorrow man marries sister”. They were hired in the place of the group’s yeshiva students who would’ve otherwise been there. The group was fenced off from the parade with parade goers throwing water bottles at them and yelling at them but at one point it collapsed and a fight broke out.

+ The Radical Monarchs, formerly known as the Radical Brownies, a social justice based scout troop for young girls of color, marched in solidarity with El/La TransLatina organization in San Francisco. Their participation was part of their #RadicalPrideUnit which included educational meetings about the LGBT community, the gender spectrum, stereotypes and the gender binary.

"When Trans women are under attack what do we do?! Fight back, fight back!!!!" #RadicalMonarchs4TransMarch #AllyshipIsAnAction #RadicalPrideUnit

+ Some Texas county clerks are refusing to issue marriage licenses to same-sex couples because they don’t understand the law all of a sudden. Attorney General Ken Paxton said clerks with religious objections to same-sex marriage can refuse to issue those licenses but might face a fine or lawsuit. While in Alabama, Chief Justice Roy Moore says, “What the order means is that within that 25-day period no (probate judge) has to issue a marriage license to a same sex couple.”