Every organization in the U.S. should be watching Girl Scouts of the USA to learn what it means to practice allyship and stand by LGBT inclusive values. The Girl Scouts of Western Washington received a $100,000 donation earmarked specifically to exclude trans girls — so leaders of the regional council sent the money back to to the donor, who has not been identified. Now they are looking to replace the funds, which are enough to send 500 girls to camp.  You can donate to their IndieGoGo right now.

”Girl Scouts is for every girl,” said council CEO Megan Ferland. ”And every girl should have the opportunity to be a Girl Scout if she wants to.”

The Girl Scouts’ inclusion of trans girls first got media attention in 2011 when a Denver troop originally rejected a trans girl who wanted to join. That troop’s leaders were unfamiliar with the scouting policies, according to reports at the time. Since then, Girl Scouts has been loud and clear about including trans scouts. The policy states:

Girl Scouts is proud to be the premiere leadership organization for girls in the country. Placement of transgender youth is handled on a case-by-case basis, with the welfare and best interests of the child and the members of the troop/group in question a top priority. That said, if the child is recognized by the family and school/community as a girl and lives culturally as a girl, then Girl Scouts is an organization that can serve her in a setting that is both emotionally and physically safe.

The organization allows trans girls to participate in camps and urges local camps and councils to make any necessary accommodations.  Its policies for staffing and volunteers are also inclusive. Many organizations with inclusive policies would think twice about turning down 100 grand, so this move demonstrates just how seriously the Girl Scouts takes its mission.

The Scouts history of inclusion goes back to its founding more than a century ago. At a time when segregation was in full force, my number one hero Juliette Gordon Lowe established a scouting organization that was deliberately inclusive of African American, Hispanic and Native American girls, as well as girls who were poor, lived in rural areas and were from immigrant families. Today, according to their website, “Girl Scouts reaches girls in urban, rural, low-income and public housing communities, and girls whose mothers are in prison or who are themselves living in correctional facilities, homeless shelters, foster care and domestic violence shelters. We have a long history of adapting activities to girls who have disabilities, special needs, and chronic illnesses.”

The scouts also include girls of all faiths and atheists, in stark contrast to the Boy Scouts. Contributing Editor Maddie says that one of her strongest memories of her experience in scouting was when her troop leader said she absolutely didn’t have to say the part in the Girl Scout promise about serving God.

“That was not my typical experience in other social settings,” Maddie said. But in her troop, “it was such a non issue it didn’t even occur to me at the time that it was kind of a big deal.”

Essentially, since its founding the Girl Scouts have been deliberately inclusive of girls who were excluded from so many other areas of life. I definitely experienced this in my 13 years as a scout in Texas. At Girl Scout camp I met girls from backgrounds much more diverse than I saw at school or church, my other main social outlets, and looking back I’m pretty sure most of the camp leaders were cool old dykes. The clearest message I got from being a Girl Scout was that being a girl could mean anything that felt true to me. 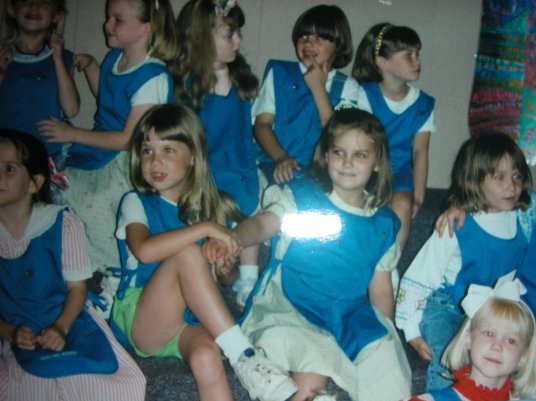 Me as a Daisy (I’m the one with the green lycras and three feet of hair) being exposed to radical progressive ideas like kindness, hard work and defining myself both individually and as a member of a community.

The Girl Scouts’ dedication to LGBT inclusivity, its work to expose girls to fields like technology and engineering and its efforts to reach marginalized girls make it a powerful force for girls and young women around the U.S. Today, their strong stance in support of trans girls sends a powerful message and promotes inclusive girlhood in a society whose conception of “girl” can feel very narrow. The Girl Scouts of Western Washington put it best on their IndieGoGo, which reached its goal in about 24 hours:

Our vision at Girl Scouts of Western Washington is that EVERY girl in our region — regardless of her race, ethnicity, socioeconomic status, sexual orientation, gender identity or geographic location — is empowered to unleash her potential, build her future and transform her world.