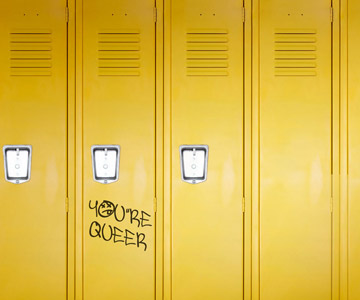 “We’re going to require that, at every school where students request that this be put in place, they be permitted to organize themselves with a gay-straight alliance. It may not be that name that they use, but the important thing is we’re going to have that kind of a supportive group there available in all our schools,” Ontario premier Dalton McGuinty said in an address earlier this week.

A new anti-bullying bill, introduced by education minister Laurel Broten this Wednesday, will require that school boards allow student-run groups that support gender equity, racial equity, students with disabilities, and students of all sexual orientations. Schools themselves will be required to “promote a positive school climate that is inclusive and accepting of all pupils, including pupils of any race, ancestry, place of origin, colour, ethnic origin, citizenship, creed, sex, sexual orientation, age, marital status, family status or disability.”

Guess which part is controversial.

Ontario schools, and Catholic schools in particular, have had an antagonistic relationship with gay-straight alliances that has grown worse over the past year. Last November, the Halton District School Board banned GSAs, and while the ban was overturned in January, students face ongoing problems with creating groups. St. Joseph Catholic Secondary School banned rainbows rather than deal with the school’s unofficial GSA, which was also told to call itself “Open Arms” because “Rainbow Alliance” was “too LGBT-sounding.”

At Toronto Pride in July, McGuinty pledged that high school students who wanted to have an LGBT support group would get one, but carefully did not use the words “GSA.” At that time, the statement only affirmed existing legislation.

The current proposed legislation still does not use the word “GSA,” a fact which some people find problematic. According to CTV, NDP leader Andrea Horwath said, “I was a little worried with the way the premier couched his remarks saying they might not be called that. Look, if we’re not prepared to allow kids to use the word gay, if we as we put legislation together and put new rules in place say that gay is a bad word, then how are we going to end bullying of kids who want to self-identify as gay?”

While some supporters of the bill don’t think it goes far enough, some Catholic leaders think it goes too far. Nancy Kirby, the president of the Ontario Catholic School Trustees’ Association, thinks that allowing GSAs is too controversial and will try to “push” students: “From where I’m sitting, it is an adult movement that is trying to push young people and they’re not adults yet, so I find it has become so controversial. That’s what we’re trying to get away from and get to the point (which is) to make schools a safe place regardless of race or sexuality.” In the past, Kirby argued against GSAs because they are “associated with activist groups, and the purpose of our clubs will be to provide support, not activism.” There is a similar feeling of unease across the Catholic school system:

“In 2011, not 1988, the Ontario Catholic Bishops’ official advice is that gay students be instructed never to act upon their sexual orientation in any way. Don’t hold hands, don’t go to a movie. Sodomy lies that way.

Some have complained, justifiably, that the anti-bullying bill seems to allow Catholic schools an out when it comes to the names of these clubs. It refers to “organizations with the name gay-straight alliance or another name.” I would add that the bill does not specify which brand of “awareness and understanding” such student organizations would be allowed to “promote.” The Bishops are very much aware of homosexuality, and they clearly think they understand it and even respect it. The question is whether the students in their care are permitted to acknowledge reality and run a club there.”

In addition to re-affirming the need for gay-straight alliances, whatever they end up being called, the bill will require that schools work to prevent bullying, intervene when necessary, and punish offenders. It will also give schools the power to permanently expel students for bullying (currently, students are only suspended). It also has a much looser definition of bullying itself, defining it as “repeated and aggressive behaviour” that is meant to or would probably cause “harm, fear or distress to another individual, including psychological harm or harm to the individual’s reputation [… when] said behaviour occurs in a context where there is a real or perceived power imbalance.” The bill is currently moving to a second reading.

Big changes can start with small steps; while making schools safer for gay kids without being able to use the word “gay” raises some questions, it’s a step in acknowledging that they’re real, and so are their bullies. The schools can’t deny that their students are experiencing “harm, fear or distress,” and getting rid of that kind of bullying can only be a good thing.