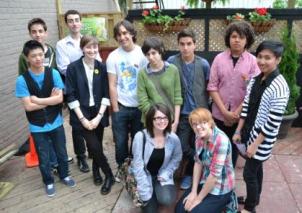 Members of Catholic Students for GSAs. By Andrea Houston, for Xtra.

Members of the unofficial gay-straight alliance at St. Joseph Catholic Secondary School, in Mississauga, were told that they couldn’t display rainbows at their June 3 anti-homophobia event.

“We brought signs and posters with rainbows and we were told that we can’t put them up. They said rainbows are associated with Pride. There’s so many other things that a rainbow could be. It’s ridiculous.”

To get around the ban, students baked cupcakes with rainbow batter, but they weren’t allowed to donate the proceeds to a lesbian-, gay-, or trans-related organization, such as Youth Line. Instead, they were told to donate to a Catholic homeless shelter. They were also prevented from distributing materials such as an AIDS Committee of Toronto flyer, information about harassment in sports, and a booklet from the Ontario Secondary School Teacher’s Federation called Shout Out Against Homophobia, Biphobia, Transphobia and Heterosexism.

According to Casey Oraa, from Queer Ontario, in Xtra, the ridiculous response from the school is in line with the Catholic school board’s overall treatment of queer students:

“The Catholic board gave the students a carrot to try to silence them when they announced the anti-bullying clubs. But it’s not enough and it’s not meeting the needs of youth. The students recognize that and they are fighting for what they want.

Nothing the schools do surprises me anymore. Not allowing the rainbow flag? They have no concept of diversity. [The board] is pushing back because Leanne is a problem for the school. She’s also a problem for Catholic school boards and the Ministry of Education. Leanne’s a problem in the best possible way, even more than she even realizes it. It’s fantastic she’s a problem.”

In April, the group tried to use the name Rainbow Alliance, but the principal said it was “too LGBT-sounding.” Instead, she pushed for the name “Open Arms,” presumably because there is no link between the name and actual gay people.

The group is planning to march in Toronto Pride this year, under the name Catholic Students for GSAs. So far, the principal has allowed this, as long as the students don’t go around talking about what school they go to or anything. Iskander has also been named the honoured dyke and “unofficial” youth grand marshal of this year’s Pride Parade.

An anti-bullying policy introduced by the Ontario Minister of Education recommended that school boards support policies that allow gay-straight alliances if the students request one, and that teachers form one if no students take the initiative. The Assembly of Catholic Bishops of Ontario responded in a letter to the Catholic school boards, saying that GSAs “imply a self-identification with sexual orientation that is often premature among high-school students.”

In November, members of the Halton Catholic District School Board banned GSAs, with Clarisse Schneider, a trustee and Grade 11 student, arguing that, “We as students are asked to be chaste so sexual activity at this point, whether heterosexual or homosexual, should really be moot.” Another trustee, Jane Michael, said, “I believe that gay-straight alliances necessitate students to self-identify and that’s not in the best interest of the students. It’ll be like, ‘Hello I’m gay.'” Presumably, she saw this as a bad thing. The board’s ban on GSAs was overturned in January, but students have still had problems actually creating groups.

Though GSAs are not officially banned, the Board wants students to create SIDE (safety, inclusivity, diversity, equity) groups instead, which will be run by trained staff members and which, according to Noa Mendelsohn Aviv, a representative from the Canadian Civil Liberties Association, is like “disbanding the basketball team and telling the athletes that they can only join an all-purpose sports club.”

Whether official or otherwise, anti-homophobia events (and anti-discrimination events, when they include anti-homophobia content) in Catholic schools face ongoing problems. Toronto-based lesbian comedian Dawn Whitwell was invited to preform at an anti-homophobia event at Bishop Marrocco-Thomas Merton Catholic Secondary School yesterday, but was told not to show up. In the Globe and Mail, Whitwell said, “I was told the board didn’t approve of my marriage.”

According to a spokesperson for the school board, the decision was actually based on the fact that Whitwell was a comedian, and they were worried she’d make fun of the bullying issue. This seems unlikely. And at least if she did, someone would be talking about it.