Welcome to the thirteenth installment of More Than Words, where I take queer words of all sorts and smash them apart and see what makes them tick. Every week I’ll be dissecting a different word, trying to figure out where it came from, how it has evolved, where it might be going, and what it all means. It’s like reading the dictionary through a prism. Feel free to send word suggestions to cara@autostraddle.com.

What does A-Camp mean to you?  The mountain air was all rareified with that question this whole weekend. It’s possible that no one actually asked it, but I heard it anyway.  I also gleaned various answers from the spontaneous cabin chants, the smiles of panelists whose lived experience made them experts, and the creak of swing chains going slack. But as helpful as those metaphors are, I’m still not satisfied, so I’ve decided to break down this invented word into its component parts and study their histories (you do you, self).  Let’s start this climb at the beginning.

A is for Autostraddle, of course, as well as “amazing” and “awesome” and “ahhh a billion queers.” It’s a leading letter, always first in line, so associated with success that apparently just seeing it can help people do better on tests. It can sound like anything from a sigh of relief to a shout of surprise. It kind of looks like a mountain, which is helpful for t-shirt design, but its shape actually grew out of a glyph of an ox’s head. Or it looks like the tip of a ready pencil, or a Try-It badge — anything that grows a sharp point out of a strong base, which makes sense. And if you want to get all casual and understated and smooth the experience into the rest of your life, or you just don’t feel like explaining this vacation to your boss, you can shut off your caps lock — “I was at a camp!” — and still be telling the truth. Kinda. 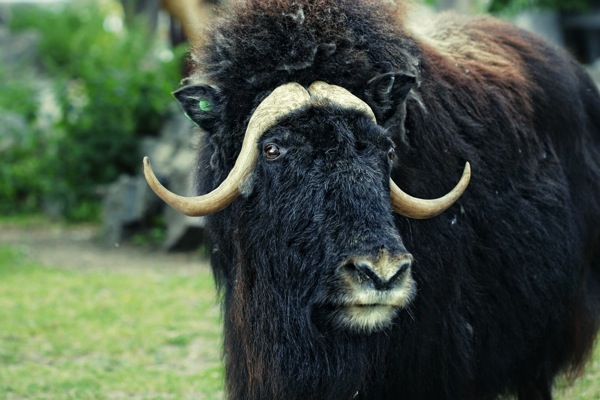 DO YOU KNOW YOUR ABC’S? NEXT TIME WON’T YOU SING WITH THIS GUY?

Although “A-Camp” is officially hyphenated, its corresponding hashtag is not, which leads me to believe that A-Campers/ACampers are encouraged to choose their own punctuation or lack thereof. This also makes sense.

Like several other words that have become important to us, the word “camp” comes from a root that means “not straight” — in this case, the Proto-Indo-European suffix “*kamp,” which translates as “bent” or “crooked.” This evolved into the Latin word “campus,” for “open field.”  Rome’s Campus Martius, or “Field of Mars,” was a large public park where the army trained, and private citizens went to pasture their livestock and work out with the army’s leftover equipment. Eventually the army started throwing big parties there after successful campaigns, and the city built small temples to host the “foreign cults” and ambassadors who weren’t allowed inside the city proper. 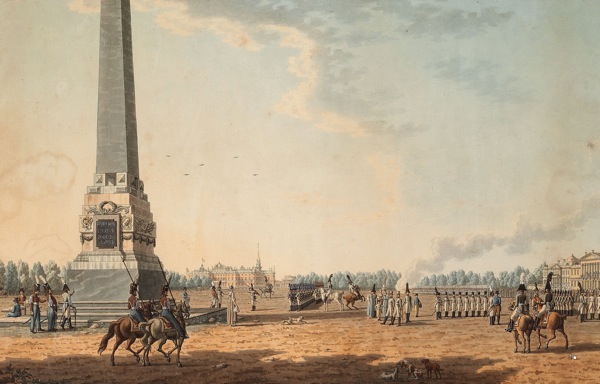 The Campus Martius was the original camp, and over the centuries the word moved into Italian, French, and English, dropped the “us,” and became generalized to mean a battlefield, or any other large place where people fight, presumably either over land rights, religion or proper bowtie technique. By the mid-16th century, the word loosened its grip on the military connotations, and by 1871, it meant a “body of adherents of a doctrine or cause” — not just a place where people with things in common could meet, but the group of people itself. A space mingles with those who occupy that space. I think we can take this to mean that the Angelus Oaks dust is permanently spiked with glitter, and the local bears are giving each other alternative lifestyle furcuts.

The word’s next big moment in the sun came thanks to Protestant Christians on the American frontier. These settlers, scattered across the land and without the resources to build and maintain permanent churches, missed the religious communities that they had left behind when they ventured out.  So every once in a while, an itinerant preacher or three would announce a “camp meeting” at a certain location.  News spread by word of mouth (this was long before AutoProtestant.com), and people came from far and wide, slept in tents or wagons, and made up for lost time by taking part in “almost continuous service.” Preachers would take shifts — when one was exhausted from spreading the good word, he’d tap out and another would immediately take his place, not unlike our own Sex Panel columnists.  The zero-to-sixty nature of these camp meetings resulted in “emotional conversion experiences, with crying, trances, and exaltation.” The most popular art form was “spontaneous song,” scrapbooked together from familiar melodies, the day’s teachings, personal experiences, and “liberal interspersings of Hallelujahs” (the snaps of the 19th century). Due to all the high emotion, which often manifested itself physically in the form of crazy dancing, “some accused the camp meetings of promoting promiscuity.” Hmm. 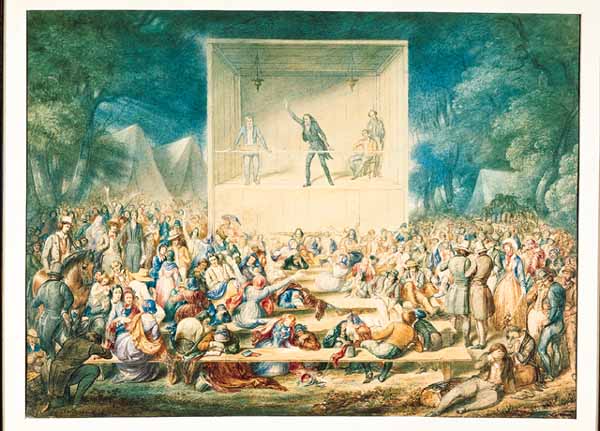 The first US summer camp for kids was invented by William and Abigail Gunn, a husband-and-wife team of school headmasters who decided to take their students into the woods for a couple of weeks in order to build their character. The idea caught on, and the the turn of the century found hundreds of camps dotting the whole country.  By the end of World War II, overnight camping was “as American as apple pie,” and when people used the word “camp,” most of the time that’s what they meant.

But sometimes “camp” was an adjective, and in those cases it meant something entirely different. Entirely different AND entirely gay. “Camp” in this sense is hard to define — that’s part of the point — but it’s associated with exaggeration, flamboyance, naivete, and artifice. Linguists argue about where this usage comes from — some trace it to the old English word “kemp,” which meant “rough” or “rude,” others to the French term “se camper,” or “to flaunt.” Others say it’s because gay men used to “camp out” on street corners, where they could hang out together and then scatter if they needed to. Regardless, this kind of camp first shows up in print in 1909 in a Victorian slang dictionary, where author J. Redding Ware defines it as “actions and gestures of exaggerated emphasis” used by “persons of exceptional want of character” (contemporaneous Victorian slang for “gay men”). Oscar Wilde is often considered the original camp-er of this kind, as his artistic calling cards (“gender-bending, wit, and aestheticism”) combined seamlessly with his public persona until camp style and gay style became intertwined. 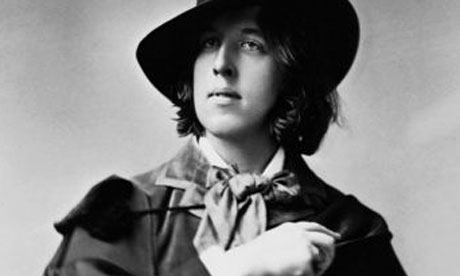 According to scholar and camp revivalist Mark Allen, the “qualities of sophistication and secret signification” that characterize camp “were developed out of necessity by the underground or outsider gay world” in the early and mid-20th century “in order to identify oneself to like-minded or similarly closeted” people, and “to operate safely apart and without fear of detection from a conservative and conventional world that could be aggressive hostile towards homosexuals, particularly effeminate males and masculine females.” Susan Sontag’s 1964 essay Notes On Camp, which went 1960s-viral and made her an instant Important Voice, attempted to separate camp from its social history and pin it down as an aesthetic, and a philosophical and artistic lens.

I don’t agree with all of the ideas in Notes on Camp — if I tallied it up, I don’t know if I’d even agree with half (camp is apolitical? Really Sontag?).  But it’s a really rich text; depending on what you bring to it, you get something different out.  A couple of its treatises marked the first time I started to understand the possibility of self-presentation as an intellectual statement, a reaction to the outside world as well as a distillation of the inner self — really, it’s the first text that made me think about queer theory. Sontag cited “Being-As-Playing-A-Role” a good quarter century before Judith Butler broke it all down in Gender Trouble. Linguist Julia P. Stanley credits the increased interest in camp among critics, intellectuals and the general public (entirely Sontag’s doing) with aiding in “the gradual lowering of social barriers to homosexuality.” And the essay itself is so queer — rather than trying to stuff itself into a traditional frame, it’s structured in a way that reflects its content. Plus Sontag dated Annie Liebovitz, you guys. 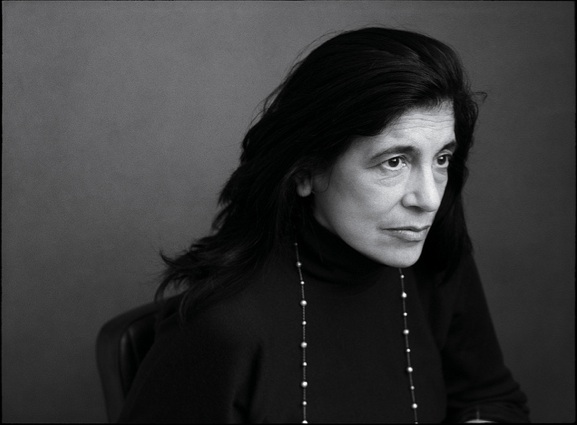 A thorough exploration of camp history and camp theory is beyond the scope of this essay (a brief summary — it’s problematic! it’s polarizing! it’s undefinable! it’s good fodder for category-based party games!). But researching the history of both senses of camp, I was struck by how fantastically campy our camp is, in all ways. Get a bunch of queers from all over and put them in the same wide open space, and it’s as serious as a war and as playful as a Mae West routine, as intense as sunrise-to-sunset prayer and as beautifully, complexly artificial as a drag show. It’s everything, because we’re everything. Even after we have to go home.