Welcome to the eleventh installment of More Than Words, where I take queer words of all sorts and smash them apart and see what makes them tick. Every week I’ll be dissecting a different word, trying to figure out where it came from, how it has evolved, where it might be going, and what it all means. It’s like reading the dictionary through a prism. Feel free to send word suggestions to cara@autostraddle.com.

Dyke is going through a familiar reclamation process, motoring alongside queer — it was just a word, and then it was a slur, and then it was a term of proud and specific identification (we’ll explore this more in Pt. 2). But what about before all that?

Most lesbians I know have their own theory about where dykes come from (my money’s on Northampton). And it turns out most linguists have their own theories about where dyke comes from, too. The first time anyone defined “dike” as a lesbian in print it was to correct someone else who had messed it up, and the OED has stuck with “of obscure origin” for a while now, so it’s pretty much open season. I was a little disappointed to find that dyke in the ‘gay-woman’ sense has nothing to do with dyke in the ‘stick-your-finger-in-it-all-night-to-save-a-country’ sense. Luckily, the alternatives are nearly as interesting. Here are some of my favorites.

YEAH RIGHT, LINGUISTS (VIA DYKES TO WATCH OUT FOR)

Back in the days when Rome ran most of Europe, and when Brittania was a collection of tribes and not a misspelled Glee ‘ship, one of those tribes was called the Iceni. In AD 61, the Iceni were ruled by a man named Prasutagus, who had a healthy alliance going with the ever-conquering Romans — up until he died and tried to perpetuate his bloodline by leaving his kingdom jointly to the Roman emperor and his own two daughters, instead of just turning it all over to Rome as was traditional. In response, the Romans seized the Prasutagian estate, flogged his surviving relatives, and called in their many colonialist loans all at the same time, effectively bankrupting the kingdom. And who stands idly by and lets that happen to her kingdom? Certainly not the Icenian Queen Boudica. As the Roman historian Tacitus explained, “she was a woman of kingly descent (and the Britons do not distinguish sex in matters of sovereignty).” She was also “tall, terrible to look on and gifted with a powerful voice [and] a flood of bright red hair,” and had spent her teenage years in warrior school. 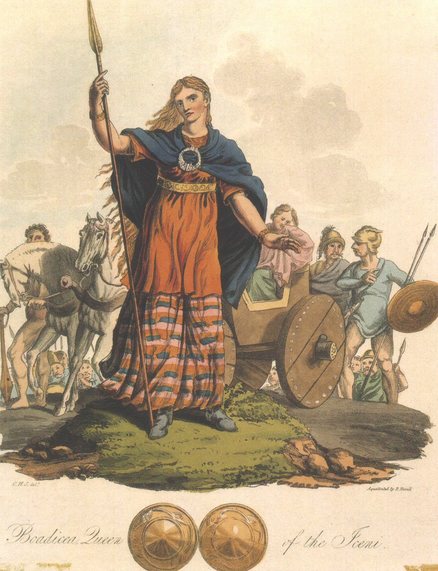 (SHE WAS REALLY GOOD AT WARRIOR SCHOOL)

Boudica led her subjects and those of several neighboring tribes in a revolt that cut a bloody swath through state capitals, military settlements, and religious sites. Her army was 100,000 strong, and after killing nearly as many Roman troops, they were defeated by Emperor Seutonius at the Battle of Watling Street. This marked the end of Britain resistance to Roman rule, and Boudica either died of an illness or committed suicide to avoid capture. She then disappeared in the folds of history until the Victorian era, when that queen, in an effective PR coup, named Boudica as her namesake and inspiration. Poet Laureate Alfred, Lord Tennyson wrote her a poem that could pass for a B-side by Alanis Morissette (“in me burns an anger, not by blood to be satiated!… so the Queen Boadicea, standing loftily charioted,/brandishing in her hand a dart and rolling glances lioness-like/yell’d and shriek’d between her daughters”). Someone fashioned a giant bronze statue. And according to etymologist Douglas Wilson, people might have started using her name to refer to any woman who seemed like she could potentially lead an army of thousands. Since the evolution of language is like an enormous game of Telephone, the term inevitably changed — go ahead, say “Boudica” ten times fast, and by the end what has it turned into? Sounds a little like “bulldyker,” doesn’t it?

FUN FACT: Another common (but almost definitely false) rumor about Boudica is that she is buried between Platforms 9 and 10 at King’s Cross Station in London, so not only is she an honorary lesbian, she is an honorary Hogwarts student. 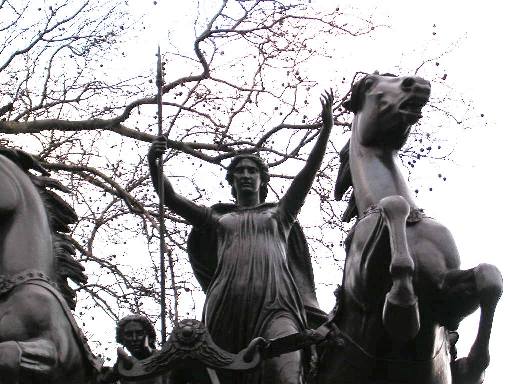 Long after Boudica, and after the British found themselves on the other side of empire-building gone awry, some brave linguists dedicated themselves to chronicling how the crazy rebellious colonists had bastardized their mother tongue. A possible precursor to dyke can be found in several of these compilations of Americanisms. Maximilian Schele de Vere’s “Americanisms: the English of the New World” (1871) and Sylvia Clapin’s “A New Dictionary Of Americanisms; being a glossary of words supposed to be peculiar to the United States and the Dominion of Canada” (1902) have extensive entries for the “peculiar American cant term” dike, defined as “the full dress, or fine clothes, of a man” or “to attire oneself faultlessly for social purposes.” Right underneath is dicked out, or out on a dike, both of which basically mean “fresh to death.” Both authors speculate that these words are overseas cousins of dight, an Old English confection meaning “to get fancy.” In her extensive 1979 study “In America They Call Us Dykes,” etymologist J.R. Roberts puts the pieces together:

“There is growing evidence that during the nineteenth and early twentieth centuries a number of women in both the United States and Europe were adopting male attire, both permanently and on occasion… [some of] these women dressed, lived, voted, worked as men in the mainstream culture. [Others] were also dressing in much the same manner, not especially for the purpose of “passing” as men, but for the real and implied emotional, political, and social freedoms inherent in the male costume. …It seems possible that in the American culture where the term dike denoted “the full set of male clothing” or “a man in full dress,” this term could also have been applied to women who dressed in such clothing. Possibly these early radical women, dressing and passing in male clothing, both permanently and on occasion, were in fact our first dike sisters in America.” 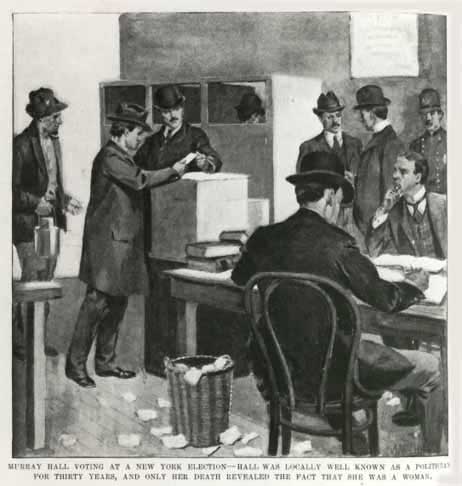 A couple of less popular theories want to gives credit for “dyke” to the ancient Greeks, whose pantheon of gods and goddesses are tempting targets because they let linguists put a face on old words. The first of these theories, proposed by poet Elsa Gidlow (an O.G. of lesbian poetry, memoir, and bohemian commune-founding), traces dyke back to Dike, a Greek goddess “approached [Zeus’s] throne with lamentations whenever a judge violated justice.” She was a “handsome goddess” who enjoyed beating her opposite (Adikia, the personification of injustice) with a staff, piercing the hearts of the unjust, and rewarding the fair and balanced. 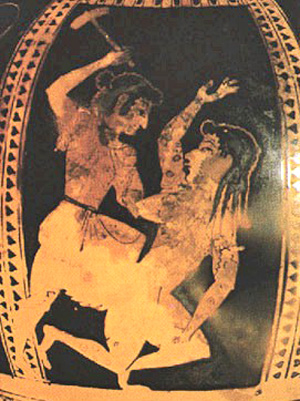 Meanwhile, structural linguist Archibald A. Hill, though he’s pretty sure he’d “seen it suggested somewhere,” was the first person I found to hazard, on paper, that “dyke” is a shortened form of “morphodyke.” That word is in turn a “colloquial shortening and mispronunciation of ‘hermaphrodite,’ which itself harkens back to Greek mythology via Hermaphroditus, the son of Hermes and Aphrodite, who merged with a water nymph and so became “a single body with a double sex.” (It would also make a great X-Men name for someone more qualified to reclaim it. Just saying.)

As happens with many little words with loaded meanings, linguists simply can’t stop trying to figure this one out. An 11-page paper by Richard A. Spears goes through dozens of possibilities before concluding that “the only explanation for dike which can be considered valid is the one which appears at the OED Supplement entry for dike: “[Of obscure origin].” Ten years later, Susan E. Krantz tried the same thing in the same journal and she also couldn’t make it out of the brackets. But it’s still fun to watch them trawl old dictionaries and compendiums and spitball a little. Among their wildest guesses:

MY NEW MASCOT, THE BULL DUIKER

And once again, we have traveled very far in time and space and concluded very little except for that etymologists of all times and spaces are kind of crazy, and that dyke has always contained multitudes. But what happened after 1930, when discourse around the word swapped linguistic mystery for political and social complexity? When did dykes start biking? How did Alison Bechdel help sue the US Trademark Trial and Appeal Board? Are there any more small African mammals involved? Tune in next time and see how dyke continues to morph(o).