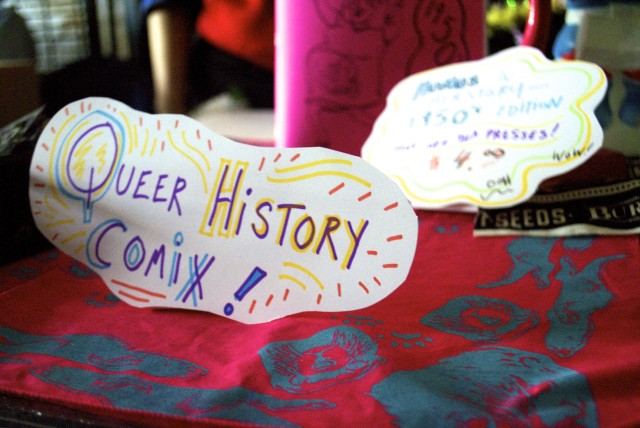 I didn’t really grow up making or reading zines, but I did have something similar. It was called the Bob Times and it was created and curated by one of my very good friends, who we’ll call Heather. We were in 7th grade and she was hilarious. The Bob Times. Hilarious! It came out once a week and took up a single notebook page front and back. Bob Times was distributed at our lunch table, which included the (excluded) female freaks and geeks. It had all our inside jokes and read like what would happen if 7th graders took over Cosmo, except to this day I think it was more intelligent than Cosmo ever was or will be. Sometimes Heather would let one of us contribute, but not often. I did, once or twice, probably about lip gloss or the reign of terror the popular kids had over us. Those were popular topics. Then one day Heather decided she wasn’t friends with any of us anymore, and she used the Bob Times to break up with us. She called us all names, told us all what exactly was wrong with us, and changed her cafeteria table.

The Bob Times taught me two things. One, that I liked seeing my name in print next to something I’d worked hard on. And two, that having a publication could create community or destroy it. It was kind of like having super powers. 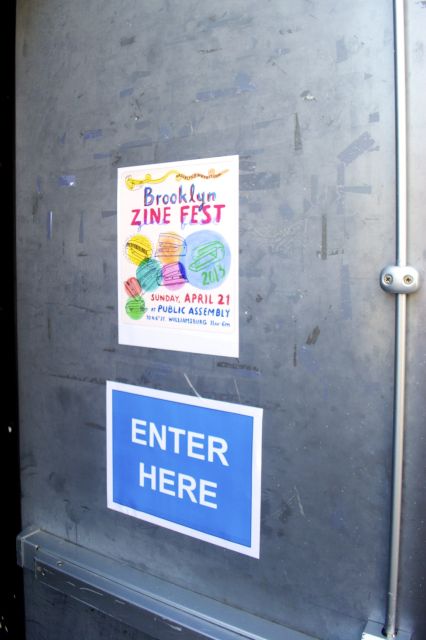 Fast forward to Sunday, April 21st, 2013. I’m an adult whose high school experience involved the internet boom, I’ve completely forgotten about the Bob Times, I’m a blogger, and I am about to walk into Brooklyn Zine Fest and frankly, I don’t know why I wanted to come. At this point, at the door to Public Assembly in Williamsburg, I still hadn’t even read a zine, at least not something that called itself a zine.

I think I had this vague sense, due to Autostraddle’s collective obsession with zines, that they were somehow related to queer community, and that was exciting for me. It wasn’t until I got there that I thought back to why, exactly, I might want to experience a bit of zine culture firsthand: oh my lesbian jesus, the Bob Times! Because I was right – in my head, zines were associated with a community, a radical one full of outcasts-turned-incasts. A way for anyone with a story and a printer and maybe some scissors to get their message into the world. To see their name in print next to something they are proud of making. We didn’t have blogs back when the Bob Times existed, or perhaps it would have been a Tumblr. In our age of technology, something feels so subversive about words we can hold in our hands, especially words put into print with no other thought than to share a sentiment – not to sell things or gain sponsorships or Twitter followers — to create a community of readers. To get a message across that publishers might not take on.

The Zine Fest combines those individual communities into one wonderful, loving large community of humans that want to hold something unique in their hands.

I went in search of the intersections, to find people and zines who could tell me a little bit about my community. I found three, but the Zine fest was so vast that I know I could have found more if I’d had more time. I spoke with these zinesters about their publications and the intersection between the zine community and the queer community. Wouldn’t you know it, much like their zines, their responses were unique and lovely. 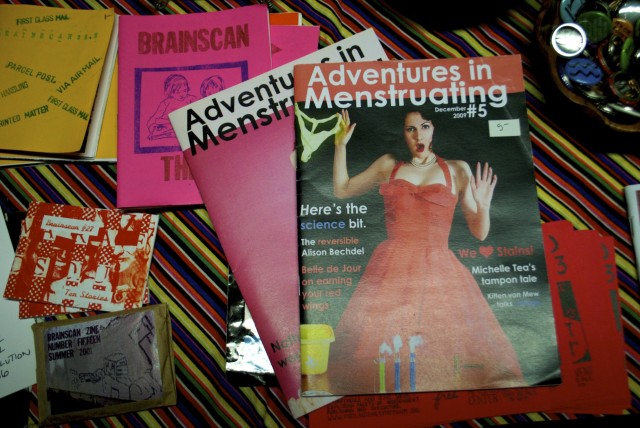 The best way I can describe Adventures in Menstruating is that it’s for everyone with a period, everyone who knows someone who gets a period, and all period appreciators. I didn’t get to speak with Quint at Brooklyn Zine Fest, as she lives in the UK, but after I couldn’t stop gushing (pun intended) over Issue #6, Alex Wrekk of Portland Button Works put me in touch. She said that Chella was someone who’d “talk your ear off” about periods, which sounded pretty awesome, because confession: I love my period. I didn’t used to, but then I discovered my Diva Cup and like, it’s on a shortlist of things I love in my day-to-day experience. Like, 1. Girlfriend 2. Cat 3. Diva Cup.

Quint’s zine is basically a queer period zine (she’s married to her partner and they’re so cute that I want to fly to the UK just to pinch their cheeks, the ones on their faces) and I’m a queer period nutcase. Perfect.

As advertised, Quint had a ton to say about the act of talking about our periods and how radical it’s perceived to be. I asked which felt more radical, the zine medium or the act of sharing our collective menstruating experiences, and we wound up talking about the way I asked the question – neither act should be radical:

It shouldn’t be radical to talk about periods, but I’ll keep doing the zine until there is no stigma and the ads [for pads, tampons, and life in general] have stopped using messages of shame, fear, and secrecy. Periods should be as normal to talk about (or not talk about) as any other bodily function. Through this zine, I’m adding some positive representation to the discourse, and I don’t know that I’d get a mainstream publisher to print my work. DIY print media shouldn’t be a radical act – more people should give it a try. It’s cheap, accessible, analogue, portable… 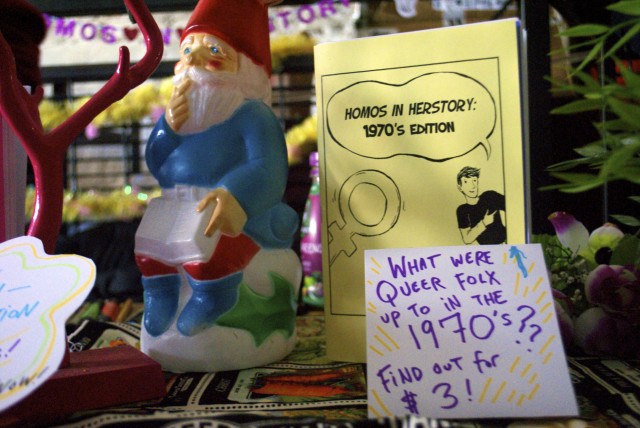 I saw Elvis’s zine, Homos In Herstory, from across the room and I very literally ran to the table with my arms wide open as if I were going to hug this comic, pull it to my bosom, and never let it go. Each zine issue = one decade of Homo Herstory, fully illustrated with an adorable style (influenced by Ellen Forney, David B., Aaron Renier, Jillian Tamaki). We bought the 1950s, but you can also get the 70s and the 20s. There’s a 19th century one that’ll be back on the market soon, Elvis assures me. Abby was with me and for crissakes, she’s a historian, so we basically spent a million years chatting with Elvis about their research process and their feelings about queer history and zines. They also have a ton of other work for your viewing pleasure. The comic is historically accurate and a must read/own for anyone interested in the history (or herstory) of us. 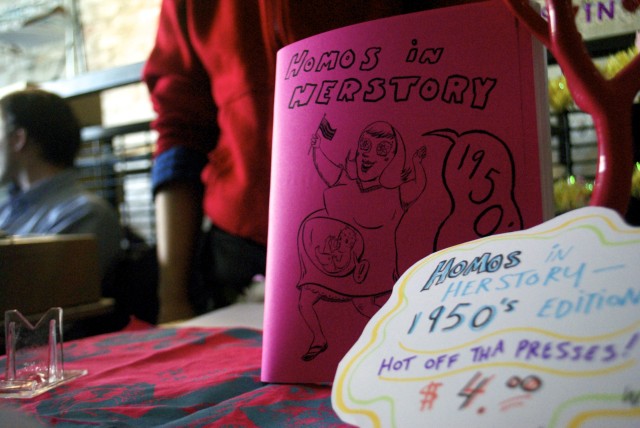 Queer history (among many types of history) has been erased from American schools and textbooks. In the event that a “notable” queer person is added to the historical record or literary canon, the educational system puts them right back in the closet, with vague references to a “close friend” or “companion.” Just a few examples: Barbara Jordan, Jane Addams, Loraine Hansberry, Willa Cather, Alice Austen, Eleanor Roosevelt. Trans people are typically not even included in the historical record and so face another layer of invisibility (Sylvia Rivera, Jack Bee Garland, Reed Erickson). 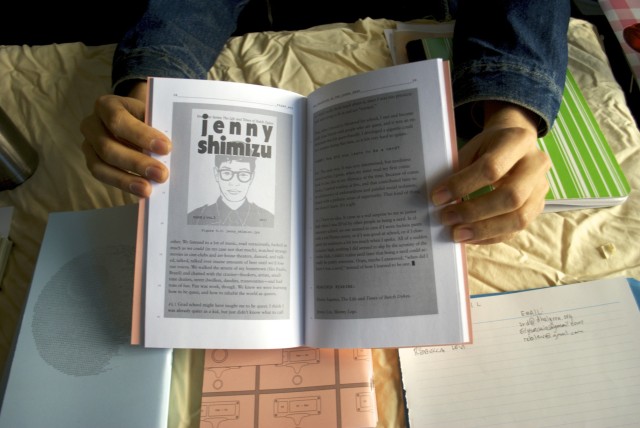 FAQNP was the first zine I saw when I walked in, and HOLY FUCK, I’M A QUEER NERD was pretty much my entire feeling about this. I think the way I felt here pretty much summarizes what Brooklyn Zine Fest is all about: the feeling that I have found my people. All issues deal with queer nerdery, and each issue has a specific theme they’re riffing on (technology, travel, education). I just about immediately bought the technology issue, because technology. This zine is curated and designed by two queer men, Ray and Eric, who had this wonderful conversation with me about including women in the queer nerd community, something their zine does very well: “It was my early intention to try to get a diverse range of contributors. We still could do a better job, but we try our best with our limited resources. One of my favorite contributors is the supremely talented Anna Dunn…”

When I told Ray about our large readership of queer nerds (holla, y’all!), he let us know that they accept submissions and are always looking for a diverse crowd of contributors. Well, what are you waiting for? 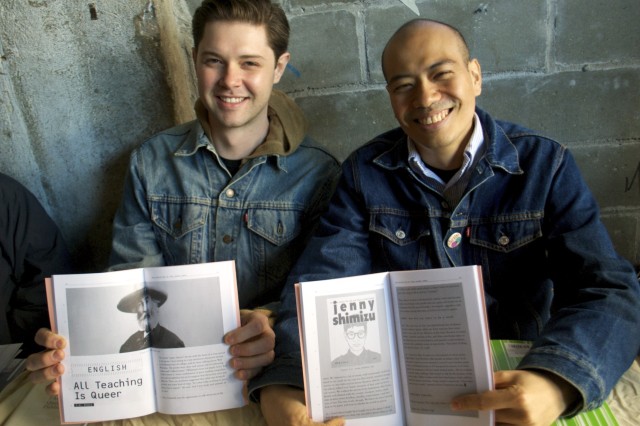 I also asked Ray and Eric why, if they write for nerds, don’t they publish digitally, and was it ever tempting to do so?

We have a website, facebook page, tumblr blog, and rarely updated twitter feed. However, FAQNP was conceived as a print-only zine, and remains that way. I get asked if it is available to read online, or if I can just send them a pdf, but the answer for now is no. I love the medium of print. A print zine feel much more nerdy than digital media in many respects, so it fits with concept of creating something for queer nerds.

I didn’t grow up in a zine culture, so it wasn’t until I spoke with these creators that I was able to recognize the power of DIY print within me and my context, and I thought, Wow — how could I have missed this? How could I have been confused about the overlap of zine and queer cultures? Elvis put it wonderfully: “Zines are kinda scruffy and underground. Queer culture is mostly DIY ‘cos folks don’t see their lives reflected in the weird values and images of the mainstream culture. Zines n’ queers are a perfect pair!” 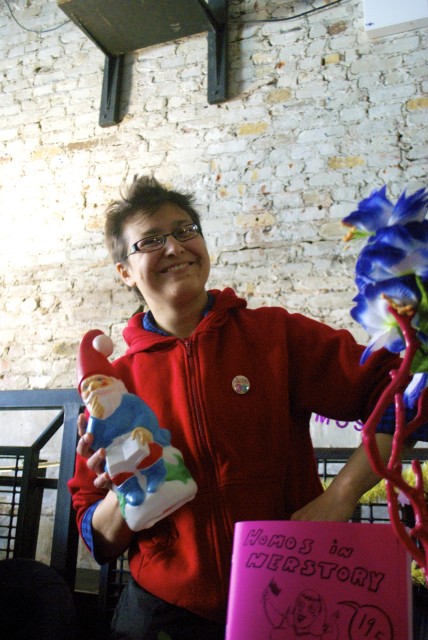 This is Elvis! Say hi to Elvis!

I want to leave you with feelings from these brilliant queer zinesters and please, do check out their work! It’ll probably give you feelings, too.

I’m not sure if there is something specifically about queer and zine making that goes hand-in-hand more than the other groups, like skaters, punks, or feminists. All these groups created amazing zines early-on in the zine movement. In the ’80s and ’90s, many groups of outsiders were being ignored or underrepresented in mainstream media. They needed a voice and found in it in zines.

I love that zines are experimental, radical/political, and non-commercial. The thing I love about the culture, along with its strong & continuing feminist roots, is that it focuses on content rather than form. Sadly, I’ve read oodles of homophobic, sexist comics… the zine community that I know and love is not about “oh, your work is kinda fucked up but it looks cool.” It’s more about connecting to the content, the person who made it, their ideas.

I love the immediacy of zines, and I love that zines allow marginalized communities and topics that challenge mainstream media to be part of the dialogue instead of being sidelined at best, relegated to the comments of some more privileged publication, or, at worst, having no voice at all. You asked why there’s a link between the queer community and the zine community and I believe it’s about being under-represented in mainstream media and the intersectionality of oppression. Menstrual activism or advocacy is one of many intersectional feminisms. Independent publishing and citizen journalism are powerful tools for under-represented groups.