A few days ago we told you about a bill in Nigeria that makes the co-habitation of same-sex couples punishable with up to 14 years in prison — and this is in a country where homosexuality is already illegal.  The new bill comes in the wake of British Prime Minister David Cameron’s threat to withhold aid from countries discriminating against gays and lesbians, which is no small matter when you consider that the UK spends an average of $31 million dollars a year on HIV/AIDS programs in Nigeria.

The Associated Press reported on the far-reaching bill:

Under the proposed law passed by Senate this week, couples who marry could face up to 14 years each in prison. Witnesses or anyone who helps couples marry could be sentenced to 10 years behind bars. The bill also punishes the “public show of same-sex amorous relationships directly or indirectly” with ten years in prison.

A newly added portion of the bill, leveling 10 years in prison for those found guilty of organizing, operating or supporting gay clubs, organizations and meetings, worries advocates in Nigeria. They fear the law could be used against groups providing aid for HIV and AIDS outreach programs that traditionally consider gay men as an at-risk group…

This bill would hugely impact the entire human-rights community of Nigeria, muzzling activists and outlawing support of those living with HIV and AIDS in a country with over 3 million people living with the disease according to the United Nations.  As Liz reported, World Aids Day was December 1st and AIDS activists have been speaking out about the devastating consequences of the legislation. 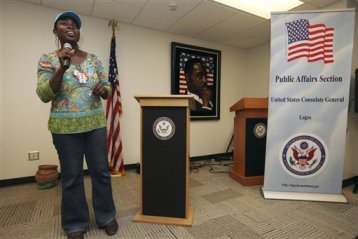 (AP Photo/Sunday Alamba) In this, Friday, Dec. 2, 2011 photo, Abosede Oladayo, 36, an AIDS activist living with HIV, speaks during an event to mark World Aids Day at the U.S Embassy in Lagos, Nigeria.

Today, I am ashamed to be Nigerian.. But it’s not because a gang of morally questionable legislators has forced through a piece of legislation that is both irrelevant and irresponsible..

It’s rather because, in a country burdened by a lethal mix of misplaced priorities, confused sense of culture and an ignorant electorate, this intolerance is in fact a popular decision..

Jideonwo notes that under the proposed legislation, even writing journalistic pieces such as this would be illegal. Already there are parts of northern Nigeria where gays and lesbians are at risk of being stoned to death.

Yesterday, a protest was held in front of the United States embassy to Nigeria in NYC and Allout.org has delivered a petition of  60,000 signatures urging Nigerian President Goodluck Johnson not to sign the bill. President Obama has just today issued a memorandum specifically directing “all agencies engaged abroad to ensure that U.S. diplomacy and foreign assistance promote and protect the human rights of LGBT persons.”

Ultimately, even if this is framed as a reaction to Cameron’s decision, the responsibility falls squarely on the Nigerian government’s head. This bill demonstrates a blatant disregard for Nigeria’s own citizens, and even more alarmingly, punishes others who would speak out on their behalf. Nigeria is a country where GLBT people already live as criminals; hopefully, the bill that would make their lives even more dangerous to live can be stopped.