When Private Bethany Smith, now known as Skyler James, 21, was outed as a lesbian by her comrades, she expected her “Don’t Ask Don’t Tell” discharge to follow shortly afterwards. It didn’t. Instead, James, who was 19 at the time, was told they’d “deal with the paperwork” following her next turn in Afghanistan. In the ensuing time, James endured so much harassment and persecution in the US Army that she went AWOL and fled for Canada, where she wants to stay and is seeking refugee status. 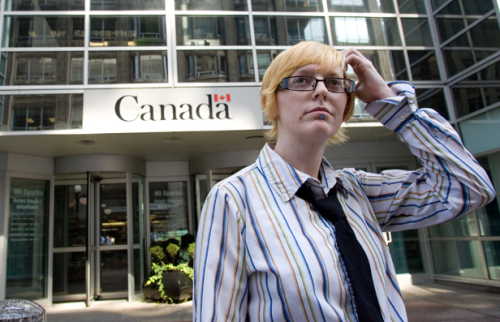 Autostraddle has also interviewed Lissa Young and Dan Choi about their experiences with DADT ending long military careers, but Skyler’s is a very different story.

Furthermore, Skyler is sick of her story being botched (we can’t imagine a headline like the CBC’s “Lesbian Deserter Appeals for Refugee Status” went in the scrapbook) (Also doesn’t that make it sound like she’s deserting the lesbians? Who would ever want to desert the lesbians?) and speaks to Natalie, candidly, about the reasons she left the army, seeking refugee status in Canada and her life now.

AUTOSTRADDLE: Why did you join the army?
SKYLER JAMES: Growing up in the United States I was made to believe that joining the army – or really any part of the military – was the best thing you could do, the best thing to do to make your parents and your country proud.

So, when I turned 18 – and with a lot of pressure from my parents – I joined the army.

AS: What was the army like for you? Was being gay a problem?
SJ: I was thinking it would very much be a good guy/super hero role. And of course being in the army is much more complicated than that.

At first the whole being gay thing – and DADT– was OK. I just thought ‘OK, I will keep things under wraps and not be so gay.’ And then things changed.

After basic training, I was moved to my regular duty station in Fort Campbell, Kentucky. Apparently, I had been seen by some of my peers holding hands with another girl in the mall. Before this, I think people thought I was just ‘the weird girl with the short haircut.’ But now, there was all this hatred and skepticism. 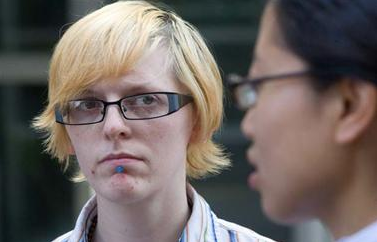 AS: What happened then?
SJ: Well, at first, it was a lot of talk: ‘Oh, there is the lesbian…I saw her at the mall,’ and a lot of verbal taunting. And then, not even a week later, the physical abuse and threats began. Other soldiers – those who were supposed to have my back – would pick me up and shake me violently. And others – including sergeants – would just stand by and watch.

Then, I began being assigned to do work – physical labor – that would normally require 3 soldiers. And I started to get punished for things that one should not get punished for: I dyed my hair and I was punished. You can dye your hair in the military – just not an “unnatural” color… so I suppose no pink or green. But I dyed it blonde.

He just shook his head and said, “We will take a look at this when we get back from deployment.”

So, I had to stay and deal with the daily harassment and the fear that, once deployed – most likely to Afghanistan – those who were meant to be on my side would be the ones who killed me.

AS: So, basically, the army – in a cruelly ironic turn of events – disobeyed its own discriminatory policy in order to retain as many people as possible for war?
SJ: Yes. Exactly.

AS: And what happened next?
SJ: Well, the hate mail and threats continued.

Some of the worst things said included: ‘We are getting the keys to your room… and we are going to beat you to death while you sleep.’ And ‘If you don’t go back into the closet and stop being who you are, we are going to kill you.’

That last letter I received, the one that said ‘We are going to get keys from the supplies sergeant’s office, come into your room while you are sleeping and murder you’ was the turning point for me. I was like ‘I am not safe here… I cannot stay… if I go to war with these people, they are going to shoot me.’

AS: And then you left? You went AWOL?
SJ: Yes, another solider and I – he was a friend of mine – decided to leave the base together and flee to Canada. We grabbed the help numbers we knew we would need upon arriving in Canada, hopped in his pickup truck and left.

AS: Was there not security stopping you?
SJ: There is security coming into the base…. but not really leaving the base. We were just able to leave.

AS: How did you get across the border?
SJ: Neither one of us had a passport or a birth certification. But immigration at the border in Windsor just asked us for our military IDs. We showed them. They then asked “Where are you going and what are you doing here?” and we told them they we were going to visit friends in Toronto. This is where the War Resisters Support Campaign (WRSC) was based.

Then a series of unfortunate events happened: we were robbed while in Toronto; we headed to Kingston, where we pawned off some items for money…and then tried to make it to Cornwall. We were about 12 km from Cornwall when we ran out of gas. Here we called the War Resisters Support Campaign.

AS: And then?
SJ: Joel Harden – from the Ottawa chapter of the WRSC – came and helped us; he listened to us and heard our stories. He brought us to Ottawa.

The WRSC helped us fill out paperwork as refugee claimants seeking refugee protection. Once the paperwork was in place, I secured a job. I have always worked, always been a law-abiding citizen. At the moment, I am working at a call center.

AS: How have people reacted to you and your story?
SJ: Most people have been incredibly kind and supportive; they have told me that I am courageous and wish me the best. The negative comments I hear are primarily from the internet. It’s the anonymity, I think. I wish people would not comment unless they know the whole story.

AS: What consequences do you face/do you fear if you deported back to the US?
SJ: Well, my life is very much here now; I have great friends, I am integrated into the community, I volunteer. It would be awful to be pulled from all of this.

Honestly, the latter scares me the most. If I were sent back there, I would fear for my life – I would fear that I would be murdered. Fort Campbell is the most infamous army base in the US for gay bashing.

Of course I will be court-martialed for being AWOL, as anyone would be. But, I think because of the time period in which I left (a time of war) and, above all, because of who I am – a lesbian – I will be punished more harshly. I fear that I will face physical abuse, persecution and/or excessive/unwarranted punishment because of my sexual orientation.

AS: Where are you now in terms of your immigration process?
SJ: In Nov 2008, the Immigration Review Board (IRB) denied my claim that if I were deported back to the US, I would face persecution on the basis of my sexual orientation. They claimed that there was not enough evidence. Well, I feel for cases like this, there never is “enough evidence.”

Even through all of this, I like my country and I love my state, Texas.

At the moment, we just finished a judicial review. My case is being examined by another federal court judge; this judge is going to decide whether my case should be reviewed again by the IRB. If he says yes, then my case will go back to the IRB, and a different member will review it. If he says no, the deportation process effectively begins. A pre-removal risk assessment will be done, which attempts to assess the risk I face of persecution if I return to the US.

My lawyer and I are submitting a humanitarian and compassionate considerations application, along with my application for permanent residence in Canada. So, friends and people I volunteer with are writing letters about why I should be allowed to stay, what an asset I am to the community and so on. Hopefully this will help my application.

AS: What advice would you give a gay individual looking to join the army?
Skyler James: Don’t join! Seriously.

If you are gay and you’re already in the military, keep your head down, don’t do anything crazy. Try as hard as possible to not let your peers find out.

If your peers do know, and they are treating you poorly – seek help. Unfortunately, the response you receive often depends on what your superiors are like.

AS: Would you have done anything differently?
Skyler James: How I answer this question really depends on my mood: there is a part of me that wishes that I had never joined the army; but then, there is another part of me that thinks the reason I am who I am today is precisely because I joined.

AS: What would you say to people that question your patriotism?
Skyler James: Even through all of this, I like my country and I love my state, Texas. I used to be able to say I would do anything for my country, but after everything that has happened and how it has been dealt with, after learning what I learned about the army and how it is run… I don’t think I would die for my country, although I would do almost anything else.

AS: Is there anything else you would like to add?
Skyler James: Riese rocks!