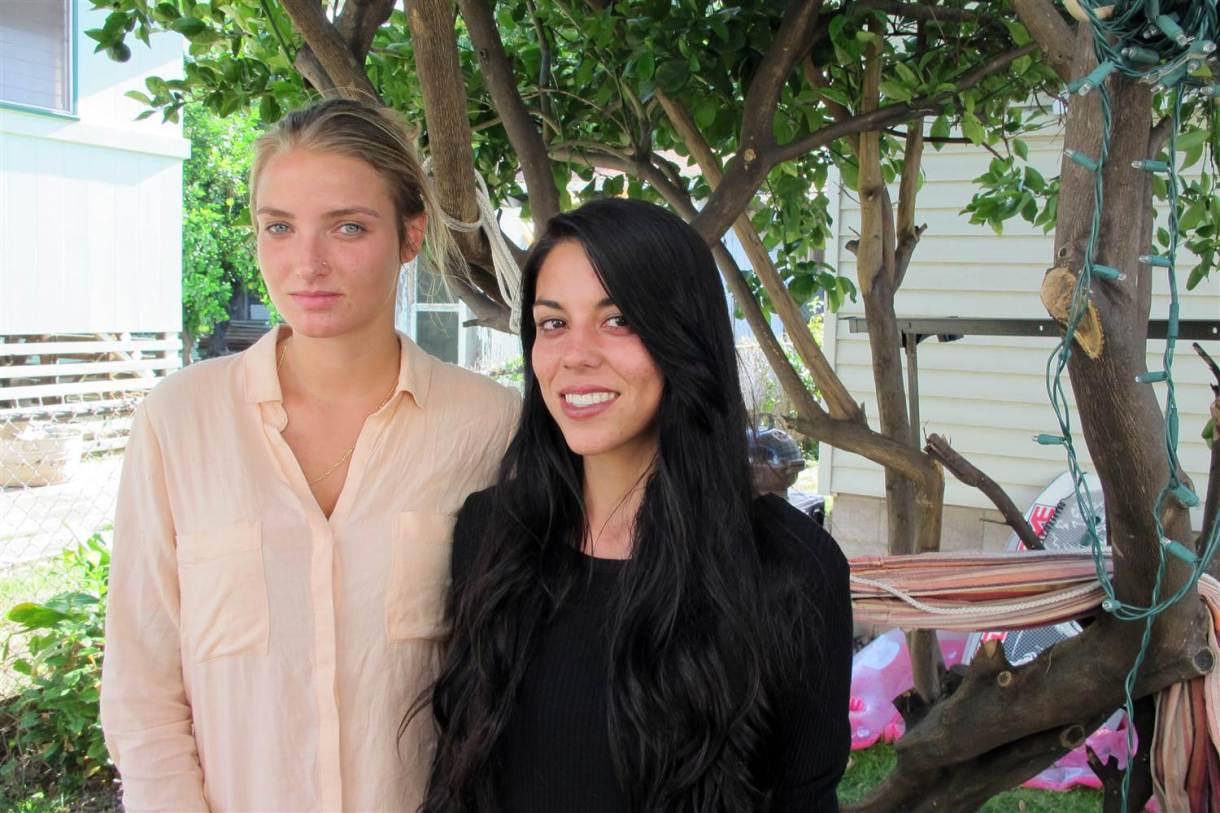 + A lesbian couple won their lawsuit filed against the city of Honolulu and a police officer after they were arrested for their PDA. Honolulu must now pay them $80,000 in damages. Los Angeles natives Courtney Wilson and Taylor Guerrero were holding hands and kissing in a Honolulu grocery store in March 2015 when police officer Bobby Harrison told them to stop and “take it somewhere else.” When they didn’t comply, the situation escalated and Harrison “threw Plaintiff Guerrero on to the ground, striking Plaintiff Wilson in the process, and placed both of them in restraints,” according to the lawsuit. Guerrero and Wilson were arrested and jailed for two days on charges of assault of an officer, which were eventually dropped.

Wilson said she wasn’t seeking any money but hoped Harrison suffered the repercussions of his actions. “For the publicity that it has gained, I hope that people saw it and it gives them inspiration to stand up for the civil rights that we have and to not tolerate bigotry behavior like that because it’s not acceptable,” Wilson told an NBC affiliate KHNL.

In true lesbian fashion, Wilson and Guerrero are no longer together but remain friends. After they pay their legal fees, the friends said they’ll split the money. “I’m just glad it’s over with,” Guerrero said.

+ Purvi Patel, the first woman convicted of feticide for having a self-induced abortion, faces 20 years in prison. On Monday, the Indiana Court of Appeals heard her case. In July 2013, Patel went to the hospital after losing 20 percent of her blood and needed emergency surgery. She told doctors she had given birth to a stillborn and believed she was only 10-12 weeks along. Patel had taken abortion pills she had bought online. A doctor called the police, who proceeded to arrest her on charges that her baby was briefly alive. Patel was convicted in April 2015. During her appeal, Patel’s lawyers, Stanford Law professor Lawrence Marshall, who helped found Northwestern University’s Center on Wrongful Conviction and Indiana University law professor Joel Schumm argued the state didn’t have any evidence that Patel knew how far along she was and that the charges brought against Patel make no sense. The state argue’s Patel committed feticide — which means the death of a fetus — and they also argue she had a live birth and neglected the child. So they’re saying she killed a fetus but also neglected a live baby? Yup, it doesn’t make sense. In addition Marshal and Schumm point out under the law Patel was convicted, which increases the severity of punishment for killing a pregnant person’s fetus, was meant to be used to convict third parties inflicting harm on pregnant people and their fetus, not the pregnant person. The state says the law doesn’t prevent them from targeting the pregnant person. This case keeps getting worse and keeps finding ways to justify the punishment of women seeking abortion.

+ Gregory Seldon, a 25-year-old black man from Virginia, is suing Airbnb for discriminating against him when he was trying to book a room in Philadelphia. Seldon says a host rejected his request to stay at the host’s place but when he sent two requests from fake profiles with white men in the photos, the host happily accepted the requests. Seldon sent complaints to Airbnb and says they were ignored. Now he’s filing a class-action suit against the company saying the host violated federal civil rights laws by denying accommodation based on race and the company ignored his complaints.

+ A malaria researcher and assistant professor at NYU sued the university’s School of Medicine for discrimination. According to the suit, OraLee Branch’s work began to suffer when department chair and microbiologist Claudio Basilico began making sexist comments towards her and told her that “women don’t belong in science.”

+ Congress approved a measure that would allow doctors to recommend medical marijuana to veterans in the 24 states where it’s legal.

+ Gay men are still being arrested under defunct sodomy laws. 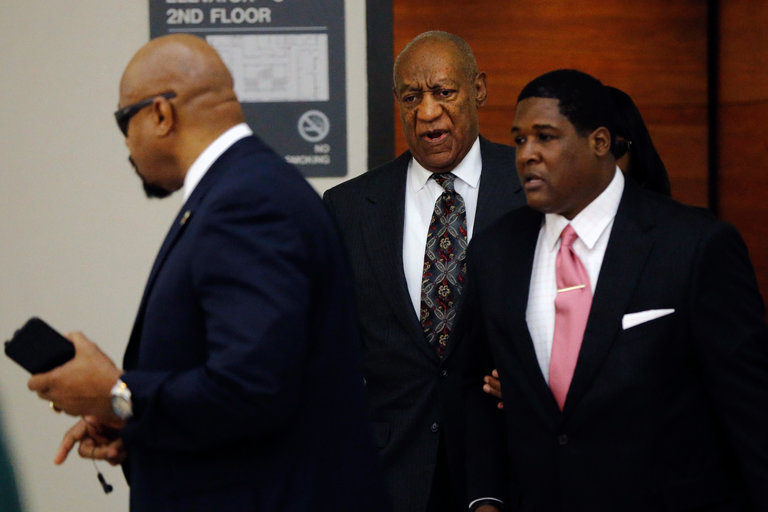 + After years of being accused of sexual assault by multiple victims, Bill Cosby will go to trial for assault against out lesbian Andrea Constand. A Pennsylvania judge found enough evidence during a hearing today to proceed to a criminal trial. Cosby faces three counts of felony indecent assault from a 2004 case involving Constand, an employee at his alma mater, Temple University. Cosby’s trial is set to start July 20. If convicted, Cosby could face up to 10 years in prison.

+ Daniel Holtzclaw, the former cop who raped and assaulted many black women while on the job, spoke to 20/20 in a phone interview and still maintains his innocence. He says the woman who came forward to speak out against him were only in it for the money. He says a lot of other shitbag things.

“The fact is, when you approach these women [and say], ‘We have a tip that you’ve been sexually assaulted by an Oklahoma City police officer,’ based on the area that I worked in and the environment and the atmosphere that I worked at — you should know that these women in these lifestyles — that’s basically giving them a lottery ticket to say, ‘Yes.’ All they had to do was say, ‘Yes,’ and then you’re going to file charges on me.”

Also 20/20 interviewed the mostly white male jurors who said it was hard to believe the black woman at first.

+ The Mormon Church finally responded to sexual assault and rape allegations at Brigham Young University, their flagship school. In a statement, church leaders wrote the church has “no tolerance for sexual assault at BYU or in the Church.” They continue on to say:

“Assault of any kind is a serious criminal offense, and we support its reporting, investigation and prosecution to the full extent of the law. Victims of assault or recipients of unwelcome sexual attention should be treated with sensitivity, compassion and respect and should feel that those to whom they disclose the assault are committed to helping them deal with the trauma they have experienced.”

+ A new Human Rights Watch report explores the impact of “bad discharges” of thousands of survivors of military sexual assault after they’ve filed official complaints about their abuse. The report compiles interviews with 163 individuals who were given “bad discharges” and forced to leave after reporting their sexual assault between 1966 to 2015. Veterans with “bad discharges” on their records can face no or reduced benefits and little to no job prospects. “…virtually nothing has been done to address the ongoing harm done to thousands of veterans who reported sexual assault before reforms took place and lost their military careers as a result of improper administrative discharges,” the report reads.

+ San Francisco’s Police Chief Greg Suhr finally resigned after a 27-year-old unarmed black woman was fatally shot by police and by the request of Mayor Ed Lee. Pressure for Suhr’s resignation had been mounting since December when five officers fatally shot Mario Woods fifteen times and then in April when it was revealed officers were exchanging racist texts.

+ One of the three Baltimore officers involved in the arrest of Freddie Gray was found not guilty of second-degree assault, reckless endangerment and misconduct in office.

+ Damn Kim Davis, back at it again with the homophobia! The antigay Kentucky county clerk who refuses to issue same-sex marriage licenses talked about the whole ordeal she’s famous for on a conservative religious program called Truths That Transform. Davis insisted she was not obligated to provide licenses to same-sex couples and pointed to the Bible for the reasons why she couldn’t issue the licenses.

+ A gay couple who were beaten by a mob of 15 people in 2014 filed a lawsuit against three of the people who attacked them. Andrew Haught and Zachary Hesse filed the suit against Kathryn Knott, Philip Williams, and Kevin Harrigan who all faced criminal charges in the attack. The suit claims the three attackers intentionally inflicted injury on the men and are seeking $50,000 in damages. The gay couple was attacked by a large group of people while walking around Philadelphia’s gayborhood and suffered many cuts, bruises and facial/jaw injuries. Last December Knott was the only one to take her case to trial and was found guilty and sentenced to 5-10 months in prison while the other assailants plead guilty and got off with just probation. 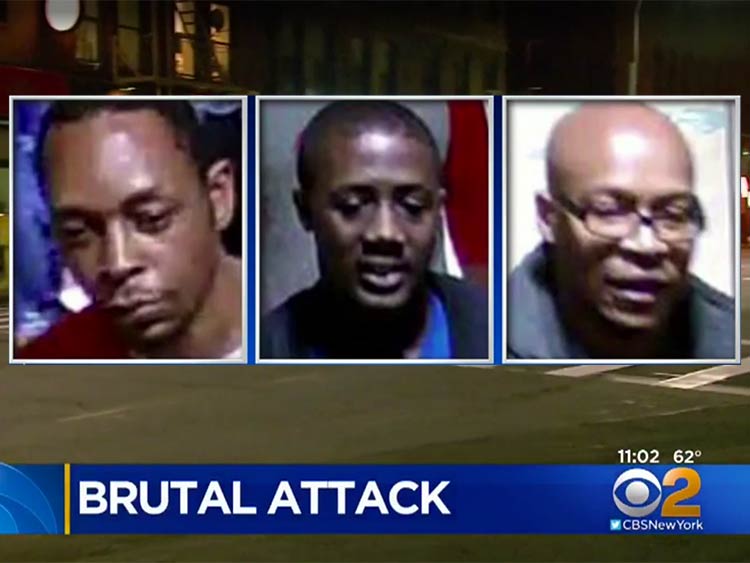 + Police are looking for three young Black men who are wanted for a brutal attack on a Brooklyn trans woman that left her with a fractured nose and eye socket. The attack happened on May 13 in Brooklyn’s Park Slope neighborhood when the 32-year-old trans woman got off the subway around 11:30 p.m. She says she was approached by a man she didn’t know and then surrounded by several other men. The first man began to hit her and called her gay slurs and then the other men joined in on the beating. After the attack, the woman walked herself to a nearby hospital. The police are investigating the attack as a hate crime.

+ A Christian high school in Wichita, Kansas says it has the right to expel students with any LGBT family member.

+ And another school but this time in Wisconsin, says it also has the right to discipline and expel gay and transgender students. The Lutheran school receives federal funding for free lunch and transportation programs and can’t discriminate against LGBT students if they want to continue to receive that federal funding. But that doesn’t stop the principal Craig Breitkreutz from speaking outwardly about how these kids are “choosing an outwardly sinful lifestyle,” and how he’s working to “protect the truths of the Scripture we hold so dear.”

+ The San Diego Gay Men’s Chorus was humiliated on Sunday at a San Diego Padres game when they were ready to perform the national anthem on the field but instead a pre-recorded track with a woman’s voice played. The Padres apologized and say they fired the contract company they hired to broadcast the national anthem and disciplined the employee who oversees it. The Gay Men’s Chorus wants more than an apology and wants an ethics committee to investigate the incident.

+ A former 9-11 operator talks about how every time she got a call in regards to a trans woman, she was the one in danger.