Well, “Judas” has finally won me over. I initially wrote it off as an over-produced headache-inducing mess but Gaga be damned, you cannot argue with that chorus. She debuted her first live performance of the track on Ellen and I’m relieved to say the “Judas” choreography is STELLAR. Sidenote, you must also check out 11 year-old Jeffrey Sewell’s cover of “Born This Way” at Joe’s Pub in NYC last week.

Remember that adorable rainbow star tattoo that mysteriously disappeared from Alice Piescezi’s bicep in later seasons of The L Word? On her decision to have it removed several years ago, Leisha Hailey says:

“Well I got it when I was 23 or 24 and um, I never intended it to be a gay rainbow. I really loved stars at the time and I really loved color. I still love color. I wanted it to be the most colorful tattoo that ever existed. And the tattoo artist went over it twice, so it was really inked on there. After a while, I couldn’t stand that it was an armband more than anything. I felt like Nick Lachey.”

Meanwhile, check out the video for the first single off Uh Huh Her‘s new album, “Black and Blue.”  You won’t find any random unicorns, but they can’t all be that special.

I guess that Glee reality show is happening after all? Entertainment Weekly has the first look at the Oxygen network’s competition among 12 actor/singers looking to land a 7-episode arc on Season 3. Ryan Murphy mentioned during the Paley festival that if a guy is chosen, he will likely be cast as Mercedes boyfriend.

Over 10 episodes, the contestants will be pared down through a series of “homework assignments” orchestrated by the Glee creators that will assess their singing, dancing, and acting. Those from the Glee team who will make the final decision on the winner include Murphy, casting director Robert Ulrich, and choreographer/co-producer Zach Woodlee. The stars of the series will also make appearances as guest mentors in each episode, with Darren Criss (Blaine) showing up in the premiere episode.

The Glee Project premieres June 12 on Oxygen. Are you into it? 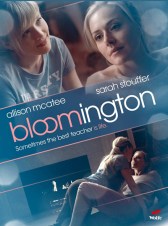 The lesbian film Bloomington, flew a bit under the radar last year but is absolutely worth a look on DVD. In contrast to the melodrama that often weighs down lesbian stories, Bloomington offers a quirky, fun take on a student/teacher romance. Written and directed by America’s Next Top Model (and Real L Word) editor Fernanda Cardoso, Bloomington stars Sarah Stouffer and Allison McAtee and is out on DVD this week.